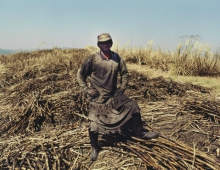 Ah, but your land is beautiful

Out of all genres of representation, next to ‘still life’, it is perhaps landscape painting that is treated like a quaint apolitical subject, which it is not. Images are far from innocent and landscape art is a bit more surreptitious in its operations, particularly because it appears so self-referential.

One of the traditional features of South African landscape art is that it depends on rendering land as vacant, empty and thus ready for the taking, the art critic James Elkins once described landscape art as “something like a dream world of imperialism”. This suggests that landscape is not in a definitive way disconnected from the fruition of colonial aspirations and dreams.

If landscape art opens a scope into the imperial dreamscape, then the legal term terra nullius (nobody’s land) is also the stuff of colonial dreams. In his famous panoramic landscapes the Afrikaaner nationalist painter J.H Pierneef presents what the art historian Lise van der Watt describes as “white ambition”. In Making Whiteness Strange, van der Watt argues that the tradition of landscape painting in South Africa offers a visual genealogy of white settlement and this is powerfully evident in Pierneef’s idyllic depictions of “disembodied’ landscapes that are distinctively emptied out of human activity.

The grammar of landscape visuality is recognizable by its dogmatically rural scenes; such as the iconic grass covered hills that roll into infinity in Alan Paton’s writings. This ‘empty land’ representation is not limited to landscape art, at its most kitsch, it is recognizable by the ‘acacia tree and the orange sunset’ combo, typified by the colonial gaze reproduced in African literature book covers.

As such, these landscape visions do not merely reproduce the ‘nobody’ of terra nullius, but they also cut out of view the urban environment as landscape, as a legitimate site of land dispossession. It follows that if we are to abide by the grammar of landscape visuality, then the urban setting is out of bounds. This stark differentiation between the rural and the urban is an old division which has shaped the black experience of dispossession in both mundane and in tragic ways. Even in the landscape images where we see human figures, they are often farmworkers who appear to blend into the natural environment. 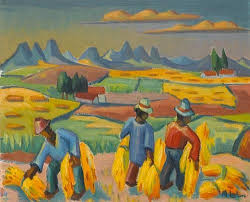 Depicted under a romantic yellow glow Maggie Laubser’s Harvesters (1932), appear so that even when we see them, we don’t really see them, they become invisibilized by their surroundings. Her farmworkers are typically depicted in servile postures, they are bending over, crouching or squatting, often performing physical back bending tasks such as picking, digging, lifting, reaching, humbly leaning towards the ground, stances appropriate for their lowly status. Laubser’s cheerful depiction of this backbreaking work echoes the happy native stereotype.

As soon as we shift our attention to black artists, such Gladys Mgudlandu, John Mohl and Gerard Sekoto, another layer of issues start to emerge. More significantly, these artists shift our attention away from the furtive possessive gaze assumed in early landscape paintings. 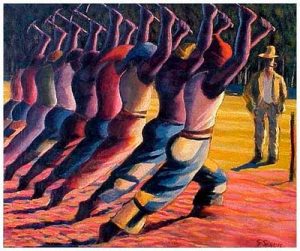 Gerard Sekoto’s iconic Song of the Pick extends the experience of dispossession beyond the rural farmland setting, it encroaches into urban industrial space, into mining, a labour structure ruthlessly designed to extract surplus from black workers. Painted in 1947, Song of the Pick carries a similar yellow harmony and the repetition of in Laubser’s Harvesters, only the power relations are exposed in Sekoto’s piece. Black men stand in a row with rounded backs that carry the heavy weight of picks in the air. A lone figure stands at a distance overseeing the scene; it is a white man smoking a pipe, wearing a plantation hat, with his hands idly resting in his pockets. The migrant system and the cheap labour that supply it, directly emerge as the consequence of land dispossession. These two aspects continue to haunt the black experience in urban settings and Sekoto brings this into our view. 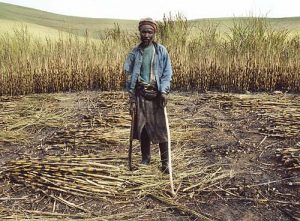 The convicted artist Zwelethu Mthethwa, in his Sugar Cane Series (2003) presents a dimension previously undetected in the tradition of landscape art. His subjects do not exhibit the bending over docility in the aforementioned landscapes. In Mthethwa’s photographs, the farm workers stand up right and meet the eyes of the camera confidently. In one instance, we see a man leaning on his machete slightly, with a knowing swagger.

While these performances are rare and refreshing they do not change their servile status in relation to the space, whereas in the past they were invisible, now in the present, the camera makes them appear in full sight as the subordinated subjects that they are.

Ah, but your land is beautiful

On the limits of landscape art and the land question

Pulling off a festival with a dream and empty pockets