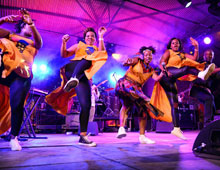 Bushfire: One of Africa’s Festival Musts

It’s not often you find a festival that hosts barefoot students, craft-beer drinking bearded hipsters, tourists, and moms who have their hands full with toddlers all in one go. Bushfire is it. With an impressive collection of music, art and food, the festival suits a range of budgets and comfort levels while calling festinos to ‘Bring the Fire’ by using art as a tool for social change.

With the explosion of the festival scene in South Africa, literally every major city and little dorpie has their own music and arts festival. The young and reckless stomp in the Limpopo dust at Oppikoppi; hipsters pack their 4x4s and head for the Karoo to test their endurance at Afrikaburn. Jazz lovers satisfy their annual craving at the Cape Town International Jazz Festival, while tiny festivals in little rural towns like the Rhodes-based Stoepsitfees promotes the simple yet dwindling tradition of sitting on stoeps and telling stories.

But there are a growing number of festivals in neighbouring countries (Malawi’s Lake of Stars, Zimbabwe’s controversial Harare Arts Festival, Mozambique’s AZGO to name a few) that are drawing South Africans across borders. A must-see is Bushfire in Swaziland, where festinos are asked to ‘Bring their Fire’ by enjoying an invigorating line-up of music while supporting local entrepreneurs and artists.

Just a four-hour drive from Joburg, the annual festival accommodates 20 000 people and offers a rich selection of theatre, poetry, dance, art exhibitions, workshops and music from all over the country. Now in its ninth year, Bushfire boasts a musical line-up spanning Afro-European neo-soul, Ethiopian funk grooves, African folk and indie-pop. With a variety of food options, four stages, an Open Mic Lounge and a marketplace stocked with exquisite local produce (jewelry, sculptures, clothes, pottery), it’s the music and so much more that makes this festival different.

Between acts, culinary options were plentiful. Hot wings and craft beer kept bearded hipsters happy in the marketplace. The older crowd enjoyed a view of the main stage from the comfort of the VIP section, complete with full service restaurant, little ones ran wild in the kids section amid blow-up slides and face paint, while students emerged from the camping grounds after sleepless nights and cold showers, to find ‘hair of the dog’ solutions alongside hot curries, boerie rolls and corn dogs in the main food stall section.

More than just a festival

But it isn’t just the energy or superb line-up of modern hip-hop, Afro-blues and jazz that makes Bushfire a bucket-list event. The internationally acclaimed festival has been credited with their social responsibility mandate, and has become known as an arts event that draws talent from across the continent in an effort to stimulate the local Swazi economy.

The festival is authentic in its approach and unafraid to bring up serious questions about the role that art can play in local development. It also provides space to educate festival-goers about safe-sex in an effort to curb the country’s high HIV/Aids infection rate, and it donates 100% of its proceeds to local charities. 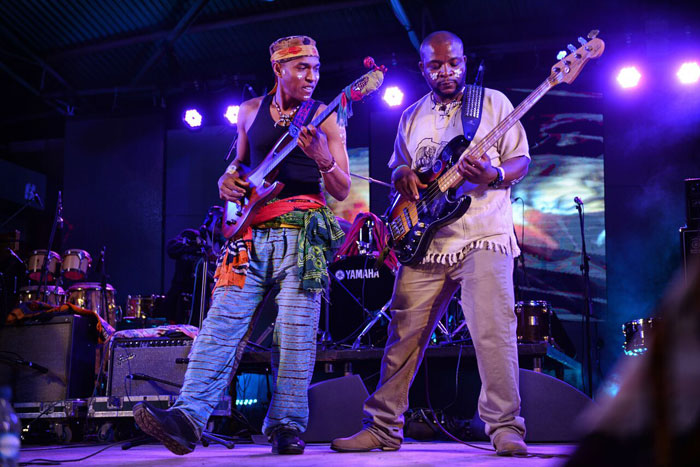 It is a refreshing move away from festivals that exist purely as piss-ups, where live-music acts as a soundtrack to all-weekend escapism in spaces where only the privileged enjoy the arts.

Bushfire aims to be a space not only of art and music, but engagement, providing a platform to interrogate the realities around who is able to access the arts and how creativity can be used for social change and economic development. Be sure to pack your passport and bring your fire next year.

Bushfire was announced this year by CNN as one of the “7 African music festivals you really have to see”. More info about the festival here.