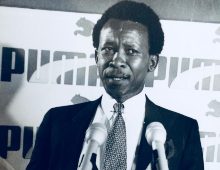 Zuluboy Arthur Molefe was one of a kind. Few scribes matched his pedigree, energy, curiosity and resourcefulness. He and others of this fast fading breed and generation, to borrow a bit of poetry, sparkle, even half seen, on the stretched forefinger of time.

Death being death, it has been unkind to us lately, first claiming aunty Juby Mayet, the activist and campaign journalist of her time, soon to be followed by the untimely death of the crafty and courageous photojournalist Bongani Mnguni. It was barely three days after Zuluboy, that we had the “Silent Assassin”, photojourno Herbert Mabuza leaving us. Someone is holding up a list up there, taking away from us these gems. It is happening with alarming rapidity.

Zuluboy, the boy from Skom, streetwise as he was colourful, man-about-town in his own right. The Pimville, Soweto, thoroughbred of the-tigers-don’t-cry war cry.

He loved his chosen craft above all, versatile and dynamic, a scribe with a scrupulously high work ethic, inspiring with confidence. He handled any journalistic beat under the sun and as he did, spoke so eloquently, so elegantly with his pen. He made it here, made it abroad, made it everywhere, he made us proud.

Jazz was his love. He wrote a book, co-authored with ace photographer Mike Mzileni, titled A Common Hunger To Sing, itself a tribute to South Africa’s Black Women of Song, of jazz.

When hardcore journalism beckoned, he waltzed away, drifting from the moorings of the entertainment scene and the jazz beats for the more serious and heavy political stuff, such was the dexterity and flexibility, or even dynamism of the man we called ZB, well-rounded artistically, a rare trait and a distinguishing attribute.

He was a man of books, lest we forget. He read up on any subject matter, omnivorously and insatiably digesting information. What he got in he would give out, and it showed in the quality of his writings. He never took his readers for granted, never for a ride.

I first met ZB at the banned World newspaper, a newsroom full of journalists with a cause, himself included. An intimidating, serious minded bunch wearing stern looks – Aggrey Klaaste, Joe Thloloe, Thami Mazwai, Sekola Sello, Mothobi Mutloatse, Phil Mtimkhulu and other crotchety characters of the old school who knew how to mix business with pleasure and had a few knocks to show for it, casualties of women, wine and dance. At the helm was Editor Percy Qoboza.

I learned classical journalism and the art of wordsmithing from this lot, from ZB who once took me out on an assignment, holding my hand. At the end I had my first lesson in practical journalism. I had grasped news-gathering techniques, swiftness, speed and accuracy. That was his other passion, a mentor who even in later years, continued to dedicate his time in nurturing the skills of young journalists. We thank you ZB.

He was taken into detention without trial for a long spell because of his work, reporting on the June 16, 1976 Soweto uprisings. The apartheid security branch police didn’t like ZB’s work, didn’t want the international community to know about the happenings in Soweto, so ZB and the others had to be stopped. The solution was simple, throw them in jail!

He re-emerged to take up his next high profile job as City Press deputy editor. He did not sit at his desk. No, he wasn’t the type who reduced able bodied men to gophers and errand boys, he led by example. He hit the road and brought us Driefontein and Saul Mkhize. The apartheid government had gone mad, at the time the South African geopolitical landscape was replete with stories of resettlement of black communities to create “White South Africa” and the black community of Driefontein, in the then eastern Transvaal, was in their sights. ZB was there, to witness visibly worried old men and women, outnumbered by armed policemen in camouflaged fatigues, who had gathered to resist the removal and destruction of Driefontein, led by Saul Mkhize. Mkhize was shot dead by a white cop and never lived to see his people triumph over evil. Driefontein was saved and ZB was there, the drama captured in the poignancy of his words and the power of the images. We thank him and those of his ilk.

Then there was Ingwavuma, even madder. In the middle of 1982 the apartheid government had announced its willingness to transfer two of South Africa’s land areas – Ingwavuma and Kangwane – totalling approximately 10 000 square kilometres – to the Kingdom of Swaziland, now Eswatini. This was seen by observes as a “reward” for the Swazis for kicking out the ANC and the PAC, thereby stopping the liberation movements from launching operations against South Africa from Swazi soil.

ZB and lensman Mzileni in tow, descended on a tense Ingwavuma. They had been warned that they were taking their lives into their own hands, that Ingwavuma was out of bounds to strangers, as they might be mistaken for Swazi trouble makers or spies. ZB triumphed and returned to tell us how they cried, laughed and shared the fears with the Ingwavuma people. They had brought the full glare of publicity to the attention of the world, graphically capturing the events in pictures and writings that found a mirror in every mind. Ingwavuma had triumphed too, again thanks to ZB and those of his sort.

The pen is indeed mightier than the sword. ZB’s courage and sword might have been struck by death, the paths of glory, in many ways, lead but to the grave. How dare we forget a man so heroic?

He called me Charlie. I called him Charlie. A name reserved for the street smart.

Now You Done Gone & Killed Me