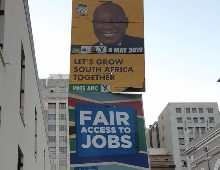 No South African voter under fifty years old can have any adult memories of Slegs Blankes notices and the rest of apartheid’s humiliations. The ANC will need to earn anew, every five years, the support of South Africans – or lose votes, writes Keith Gottschalk.

Now that the general election results are counted, we can reflect on a few important issues.

First, what does the future hold for the ANC? If one traces on a graph the ANC results in the general elections of 2009, 2014, and 2019, and should its rate of decline continue it can only win another two general elections before sinking below 50%, and becoming the Official Opposition.

On the other hand, if we plot the ANC’s results in the municipal elections of 2016 and the general election of 2019, we can argue that Cyril Ramaphosa has started the recovery of the ANC.

No South African voter under fifty years old can have any adult memories of Slegs Blankes notices and the rest of apartheid’s humiliations. The ANC will need to earn anew, every five years, the support of South Africans – or lose votes. Clearly, reducing unemployment is its most urgent task.

In democracies, no party has ruled longer than about half a century. Sweden’s Social Democrats, the Botswana Democratic Party, are such examples. Unless we imagine the ANC will set a world record, it must now be halfway through its first term of office as government.

Neither is the ANC guaranteed that after a term as official opposition, it will return to power. A decade after the ANC lost power in the Western Cape Province, its vote continues to shrink at every election. It has yet to demonstrate that it can turn this around.

2019 is the jubilee anniversary – the 60th year – of the Democratic Alliance being founded as the Progressive Party in 1959. It ties for a place with the Pan-Africanist Congress as the eighth-longest surviving party in Africa. But while the PAC barely survives with only one MP, the DA has thrived and grown from under 2% of the votes in 1994 to over 20% of the votes in 2019: it is the Official Opposition.

The DA faces its own strategic choices. Because it has not stood up for the Afrikaans language in schools and universities, and accepted the principles of affirmative action and preferential procurement, it lost in 2019 some white voters to the Vryheid Front Plus. But if it is to win more black votes, it will need to be seen to be more enthusiastic about AA and EE, or some workable alternatives.

Further, for an official opposition to look credible as a future government, it needs to double its votes to over 40%. DA activists claimed that the DA would win 30% in the 2014 election and get half the votes in 2019. In 2019, they claimed the DA would win the Western Cape, Northern Cape, and Gauteng provinces. The DA did indeed increase its votes in Gauteng to 30% in 2014, dropping a few percent in 2019. In both the 2014 and 2019 elections, the DA election campaign gave priority of resources and activities to Gauteng, and it relocated its head office to Gauteng, but still could not win over a majority of Gauteng voters.

Let us step back to survey a wider scene. The electorate slightly polarised, though not as much as in many European countries. The left-of-centre ANC lost votes to the more militant Economic Freedom Fighters. The right-of-centre DA lost votes to the right wing Vryheid Front Plus.

Historically, every faction that split from the ANC, or was expelled, shrank with every succeeding election – the PAC, UDM, and COPE. But the Economic Freedom Fighters have bucked this trend. They have increased their vote, so far, with every new election, now just over 10%. They also have a noticeably younger average age of their elected MPs, MPLs, and councillors. The ANC Youth League has not yet recovered from being disbanded, and restarted with an interim leadership. The EFF has seized this gap.

These parties are also evolving. The VF+ election manifesto pledged to fight “for the white and coloured victims of affirmative action”. The EFF election manifesto contained more Father Christmas wishes than any other party. Promising to double all social grants was merely one of many proposals, each of which would necessitate massive tax increases.

The VF+ received more votes than ever since 1994, which won it 10 MPs. The EFF vote continued to rise, including many student votes.

The next elections due are the local government elections of 2021 – municipalities and metros. We can already see that unemployment statistics, and the recovery of Eskom, are top of the list as issues. Others include getting back reliable and safe train commuting, and dismantling corruption and violent crime.

Keith Gottschalk is a political scientist from the University of the Western Cape.