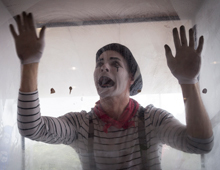 The Fest has ended but the memory lingers

The posters have been taken down, the artists have left and overnight Grahamstown has returned to being a sleepy town. The National Arts Festival may be over, but the buzz lingers and the dialogues continue with satire and freedom of expression being the main themes this year. The Journalist brings you the pics and videos that made this fest one to remember.

“The moment I find a black ventriloquist you’re gone dude,” Chester Missing said to ventriloquist and comedian Conrad Koch. A white guy using a coloured puppet to draw attention to the racial tensions that still exist in South Africa. It’s hard to imagine something more problematic. Conrad Koch talks about satire, power, and being an asshole.

“I wouldn’t leave the stage because the police were hanging around and I thought if you’re going to take me, take me in the light. It might be the best sketch in the show. If you’re going to shoot me, do it properly so that people can remember it,” said Pieter-Dirk Uys, a legend of the South African creative scene. He talks about satire in the ‘old days’ as “the clown with purple nose and green hair” and the role of satire today, in a democracy.

Portrait of myself as my father, choreographed by Nora Chipaumire and performed by the Tumbuka Dance Company, interrogates what it means to be Zimbabwean across time and space while celebrating masculinity, the black African body and performance. The piece, performed on a stage covered in red earth, is brought to life through its high energy music and dance moves.

Nora Chipaumire, the choreographer of portrait of myself as my father has been embracing and challenging stereotypes of Africa and the black African body for over 10 years. The dance looks at the African male through the lens of colonialism, cultural traditions, Christianity, liberation struggles and the way these ideas influence the African family and society as a whole.

The Last Attitude, pushes the boundaries and acceptable norms of ballet. Taking on themes of lightness and heaviness, strict movements and free experimentation, dancers switch effortlessly between the male and female roles. Mamela Nyamza and Nelisiwe Xaba sets out to explore the relationship between men and women in ballet, juxtaposing male and female, support and exploitation, they travel through a number of scenarios in which the typical dynamics of ballet are subverted.

“Jazz is a lot like life,” said Thandi Ntuli who grew up in a musical family “there’s no family gathering that does not end in singing,” she said. Ntuli is an up and coming professional pianist who’s making strides in the industry.

Just 22 years old, Benjamin Jeptha is already making a name for himself. The youngster treated the crowd to sounds from his debut album, Homecoming, which infuses gospel and Goema to make a unique South African sound. This young musician’s musical identity is constantly evolving, with his sound aiming to leave the listener inspired. Benjamin Jephta shared the stage with his quintet including Marcus Wyatt (trumpet), Sphelelo Mazibuko (drums), Sisonke Xonti (saxophone) and Kyle Shepherd (piano).

Combining song, dance and slam poetry 1606 revisits the fatal morning of June 16, 1976. It follows key role players like Tsietsi Mashinini and other unsung heroes who were pivotal in dismantling the apartheid regime. Winner of a Standard Bank Ovation at the 2015 National Arts Festival in Grahamstown.

“It is an honour to find myself directing a piece I helped to create some 30 years ago… It reminds us of the passion with which we demanded our freedom. It reminds us of how we have allowed ourselves to be side-tracked. How we quickly let down our guard when we thought freedom was achieved,” wrote Thoko Ntshinga director of Born in the RSA, which marks the 20th anniversary of the passing of Barney Simon, theatre legend and co-founder of the Market Theatre. The piece was first performed in 1985, and 30 years on, it’s still as relevant as it was all those decades ago.

Keep an eye on your local arts pages for performances coming to your city.