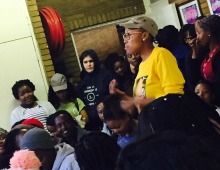 Students are making their voices heard in the call for abuse against women to stop. At the University of the Free State (UFS) the Student Representative Council (SRC) held a meeting with students, who expressed frustration and fears as violence against women continues. Nwabisa Timeni reports.

Abuse against women has always been a sensitive and crucial subject in South Africa and in recent weeks it’s dominated headlines. Statistics by South Africa’s 2016 Demographic and Health Survey states that on average, one in five women in the country over the age of 18 has experienced physical violence. One of the most recent cases that has shook the nation is the murder of Karabo Mokoena, allegedly killed by her boyfriend at the age of 22.

Mokoena’s case is one of many and incidents that violate the rights of women take place on a daily basis. Earlier this month police in the Free State urged the Bloemfontein community to remain calm after allegations of women being abducted in a local mall began circulating on social media.

The messages of women being kidnapped caused alarm and student leader, Mathlodi Leteane, who heads up the Transformation portfolio of the SRC at UFS called an urgent meeting to discuss the safety of women on campus.

Students voiced concern about the lack of action from the university with regards to crime on campus while others agreed that they feared for their safety on and off campus. Other alarming issues came up during discussions including the amount of pending cases of crime against students and the fact that there are only two investigative officers on campus.

Second year medicine student, Precious Malate (20), said that she usually studies until late at night and does not feel safe walking to and from campus after dark. “I walk with the thought that someone might just try their luck and kidnap me. The SRC and SAPS are doing nothing about it as students still fear for their lives”, she said.

Third year Bachelor of Accounting student, Nomathemba Tsolo (22), said she does not think the police are taking enough action and spoke out about the lack of patrolling around her area.

Saayman and Kaalsen said that the ‘lack of money’ from the university was one of the reasons that campus security was sparse and cases brought forward by students who are victims of crime are often not dealt with timeously. Students shot back and questioned why ‘lack of money’ was a factor regarding criminal activity when numerous security personnel are brought on to campus during student protests.

The behaviour of men also came up. “I am tired of sugarcoating things. These men should be raised to respect women. I cannot even go to Spar to buy bread without being scared, thinking if I will come back or not. It is time the university uses its operational funds to protect us. If things don’t change, we will change them,” said one student who preferred to remain anonymous.

At the meeting held by the SRC, Saayman and Kaalsen assured students that additional security measures will be taken on campus. However, some students remain sceptical about effective change taking place. Kelly Molatlhwe (19), a first year social work student, said that students are targeted when they draw cash from ATMs on and around campus.

“People have the perception that because our parents send us to university we must have money which is actually sad because our lives are in constant danger. What have the police done? Nothing…We still await to see whether measures are put in place,” she said.

Second year social sciences student, Ziyanda Mazibuko (19) was mugged last year and still suffers trauma from the event. She said students should be more vigilent and that the SRC should take the initiative and call a meeting to students’ concerns around safety.

My figure is not broken

A piece on body shaming

UFS students express frustration about safety on and off campus