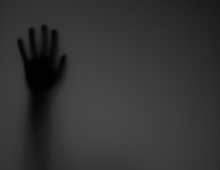 Lesupi, who regards herself as a victim-survivor, was raped last year. In this piece, she shares her thoughts on the anniversary marking her encounter.

I took a shower the next morning to wash away the shame, the filth, the worthlessness you inflicted upon me. But because I started bleeding, I realised it was pointless. I realised that it wasn’t just blood, it was the sluggishly dripping tears of my broken hymen, and my vagina was mourning the loss of its dignity.

As ripped and tormented as my soul was at that moment, I couldn’t help but blame myself. I blamed myself for the late-night walk, for the glass of wine I had earlier on, for wearing baggy shorts, for just everything. I stopped the shower and walked back to my room, I didn’t deserve something as pure as water to get into contact with this piece of undeserving structure.

Shapeshifting from paranoia to anxiety to suicidal thoughts and back to paranoia throughout the day deeply exhausted me. I couldn’t bear seeing the look on your face at the inter-res soccer tournament a few hours after our first encounter, the only face I recognised clearly out of the few that were there the previous night. All I could see was, “I would do it all over again if I had the chance, no regrets” and then you were my greatest fear, you and all your other mates. I lived in fear of seeing you, catching your unknown scent, hearing your unidentified footsteps, feeling your heavy presence and tasting your filth again.

I was later blessed with a two-minute lasting courage of getting tested and writing a trashed statement, but I gave up. I gave up on trying to shift the blame onto you by swimming through a crooked justice system. I gave up because everyone there gave me more reason to believe I was at fault. Even through the intensified paranoia and manic episodes, I still believe I somehow deserved all of it. You had red sneakers the next time I met you, I froze in front of you as flashbacks came flooding back. To my embarrassment, the act of you spitting felt like a stamp to the slutty portfolio I had just acquired. It took me 20 minutes after that to proceed with my fifth suicide attempt that landed me in a coma. I hated myself for waking up three days later.

A year later, I still feel like I am missing a piece of my soul. The wound of rape is unhurriedly starting to heal, but the scar will forever stay within me and it doesn’t help having encounters that project all sorts of triggers. On the eve of a new year of changed perception, I took that shower; I let it run longer this time. I wiped the fear of being off my face, washed the undying scent of your shameful soul off my hair, scrubbed the shame out of my body, shaved away the worthlessness and self-loath and felt the pureness of my soul again.

April last year I was raped, April this year I took back my body.

Lost and found: sexuality and identity at varsity

“This victory is not just for me”

April last year I was raped, April this year I took back my body