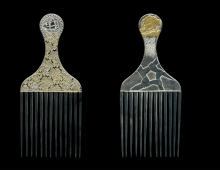 The sophistication of black hair

Black hair is as politically charged as any other aspect of black existence. Its meaning is hogged by black activists of varying stature in the same manner they would with any cultural commodity which might deliver them the support of young Black Revolutionaries. It is objectified; all abstractions banished, with no hesitation, in pursuit of a frail camaraderie perched on the verge of leisure.

Gutting this blood red comb through my hair. Laminating that Mandela-styled groove through the left side of my head with delicate swabs of Vaseline on my fingertips. This ritual often takes more time out of my day than preparing breakfast.

I assume that this hairstyle gives my face a neatly detailed look. There is less dandruff falling out at inappropriate moments. I also refrain from meddling with it for fear of ruining my appearance.

I used to not even bother with combing, let alone moisturising my hair. Instead, I would let the days’ worth of scratching off dandruff and picking scabs on my long-neglected scalp determine how my hair would shape out. This was my own act of revolt.

In my childhood, between sixth and nineth grade, such collateral activism would doubtlessly have been misinterpreted as disrespect towards my late father and grandfather who always had their heads cleanly shaved.

Still, this misinterpretation would be somewhat closer to my truth than the reaction of the white teachers and peers in primary school. A shaved black head, yes I mean exactly this, was strictly required by the school’s rules which also prescribed punishing a pupil or suspending them as a discipline against any transgression.

Even if none of these dreaded phantoms of disobedience haunted you there were other ways for the school to make one feel dirty and out of place because of the texture of one’s hair.

During a farewell ceremony in my seventh grade our class booked the athletic pool for an afternoon swim with some food. I hadn’t shaved my hair and it looked, as my cousin and I would joke, like “Rice Crispies”. It was against the rules and probably better for maintenance for one to enter the pool without a swimming cap on. The son of the school janitor and I sat together in the sunnier areas of the pavilion as the only two wild-haired blacks watching our peers fool around in the pool.

When two black players of the school’s soccer team entered the swimming area we assumed we might pass the time over by kicking around the soccer ball with them. Although their hair had been cut much more recently than ours they still had hair on their heads. Surely, like us, they wouldn’t be allowed in the water without their swimming caps.

But, after a quick word with their coach and some congratulations from the other teachers about their recent tournament victory, they were in. Honestly, I half-expected it.

Feeling left out yet knowing our inquisitive parents would want a break-down of the day, we spent the remainder of the day on the side lines with the white boys. They were familiar enough with swimming pools to know better than to stay in for too long.

Their caps were off and their hair gleaned in the sun all tints of light bronze hues. They dipped in and out of the pool irrespective of whether their hair was covered or not without so much as a warning look from the teachers.

I felt a bit envious of their hair.

I rage, today, at my envy but it was there, as true and clear as the shedding skin on my arms when I got home.

I eventually received my final school report with little else to show, by way of accolades, besides an average academic record and entered Wendywood High School for little more than a year before relocating to the “aerotropolis” of Ekurhuleni.

While possessing no pool or swimming team, Norkem Park High School had a small library and was surrounded by a wealth of other options. My favourite being the Tembisa Library. Here, I found literature which resonated with questions I had about the liberation struggle which I felt I was expected to know by heart after my reading of Orwell’s Animal Farm.

Unsure where to begin, I started with Western Philosophy whose canon I travelled widely, from Plato’s Socrates to MaryWollstonecraft’s Vindication to Descartes’ Meditations. These authors’ search for truth was very thorough and they either went on to enjoy a sort of martyrdom after their death or earned the title, in contemporary times, of having founded a “school of thought” – an attribute I craved back then.

I later picked up titles such as “How man can die better” and “Conversations with myself”. These works contextualised yet dismantled what I had learned from the West, easing me into the post-colonial and deconstructionist perspectives.

Today, when I participate in this ritual embracing the sophistication of my black hair, I am more lenient with how I judge myself as a black man. I do not need to be radical or militant to understand our history of oppression. I can determine who I will become regardless of who validates it. Shaven head or not.

The sophistication of black hair