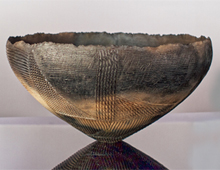 Song of the Soil: An exhibition by S’bonelo Tau Luthuli

Ceramicist S’bonelo Tau Luthuli’s work Ihubu Lengabadi (Song of the Soil) is currently on exhibition at the 6 Spin Street Gallery in Cape Town.

The exhibition opened on First Thursday, 5 November, and will run until 19 November.

Durban based Luthuli works in the tradition of the great ceramic artist Nesta Nala and takes inspiration from her, as well as Clive Sithole and Ian Garrett. Standing on the shoulders of these great South African artists, Luthuli takes pot making to a number of levels – spiritual and meditative, intellectual and philosophical – applying his personal journey as the pivot and pen of his narrative.

He skilfully uses every pot he produces to scribe a message, which he hopes reflects meaning in life. Their messages are inspired by African indigenous visual heritage, while demonstrating a progressive contemporary dimension, as well as showing a future with great possibilities.

The artist’s statement, an overview, plus detail for every pot, was written in isiZulu by S’bonelo Tau Luthuli and then translated into English by Sokhaya Charles Nkosi – all of which gives access to a rich, painful, but ultimately inspiring worldview and life experience.

“My work arises from a contextual and spiritual base that allows me to unravel, bring to the surface and navigate a path of creative impulses. These impulses draw their character from love, anger, hate, pain, resolve and happiness. Each work, as it is in process towards completion, is modelled with the spiritual powers that can be experienced by me (the artist). The work heals, endows and interacts with my mental, physical and emotional state of wellbeing. In this way my work reveals how I look at the spirituality underpinning life in general and how this has affected my own personal life.

What becomes apparent is that most works depict the painful path that I have trod and through which I have survived many challenges. The works reflect my history and that of indigenous people of Africa and life in general as people pursue the fight for survival. The critical part for me is the unbundling of the lies that one was exposed to when growing up and the truth that was not revealed to us. My depiction draws its content from religious, political, traditional practices, heritage, customs and aspects of the dynamics of life in general.

The enhancement of the work with texture and detail can be aligned to the ways our ancestors are recognised in ritualistic incisions and scarification on the body. This practice is preceded by an agreement, which is spiritually anchored, between the living and the ancestors. My ceramic work in this exhibition is aimed at bringing to the surface my personal reaction to every factor that has punctuated my life.”- S’bonelo Tau Luthuli

Luthuli, whose inspiration to be a pot maker came from a high school visit to the Durban Art Gallery where he saw Clive Sithole’s work, is the first young artist to be presented to the public as part of the Arts and Ubuntu Trust’s Travelling Art Institute, which is supported by the Mzansi Golden Economy Fund of the Department of Arts and Culture. He recently had his exhibition at the Irma Stern Museum from 10 – 24 October.

A gallery of his work shared by First Thursdays can be viewed here.