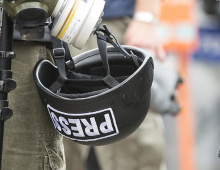 On 8 July 2019 Ethiopia’s Ministry of Defence announced plans to charge journalists and media houses for “publishing defamatory information about the Ethiopia National Defence Force.” According to Amnesty International, the Ethiopian government risks rolling back the great progress it made on media freedom last year.

Since taking office in April 2018, Prime Minister Abiy Ahmed’s government has overturned the repressive civil society law and released dozens of detained journalists and bloggers. By the end of 2018, not a single journalist remained behind bars, according to the Committee to Protect Journalists, and, in 2019, Ethiopia leapt 40 places up the World Press Freedom Index.

However, following a wave of arrests of journalists this month, the Ministry of Defence yesterday announced plans to charge journalists and media houses for “publishing defamatory information about the Ethiopia National Defence Force”.

“This new round of arrests is a hugely regressive move that risks rolling back the progress witnessed in 2018. All journalists arrested must be immediately released and all charges against them unconditionally dropped.”

Berihun Adane, Editor-in-Chief of the privately-owned Asrat TV and the weekly Berera newspaper, was arrested on 26 June, while Elias Gebru, editor of the Enqu magazine, defunct since 2014, was arrested on 6 July.

Both journalists have since been charged under the Anti- Terrorism Proclamation (2009), which was used by previous governments to bring trumped-up charges against its critics.

The latest round of arrests in the wake of the 22 June assassination of the army chief of staff and other high-ranking government officers, has also targeted activists and members of the opposition National Movement of the Amhara.

Toxic Hypermasculinity and the portrayal of gendered roles in media