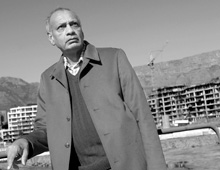 Life-long activist and journalist Bennie Bunsee passed away at the weekend, two weeks before his 80th birthday. University of Free State student, Keabetswe Magano, pays tribute to a “walking library” who left a lasting impression on her.

Two years ago I had the opportunity to meet and witness the brilliance of Bennie Bunsee, the man with 50 000+ books in his home. At first I thought we were meeting him in a small community library but it was his home. There were book shelves filled from left to right, from the first shelf, a few centimetres from the celling right to the last one just a few centimetres from the ground. They stretched wall to wall from the sitting room right through to his bedroom and even some in the kitchen.

He collected these books over the years as he travelled to various countries when he served as an active member of the then-banned Pan African Congress (PAC). The books ranged from Ancient history to UFOs, literally everything one could think of. He might not have read all the books but he knew all the ‘main’ books in each category clearly labelled on the shelves. Not only was this man living in a library, he was also a “walking library”. And now he is gone. He died last week after unsuccessful heart surgery, two weeks before his 80th birthday.

The level of insight that he had on African history could surely constitute a whole course on African studies at any University. What I learnt that day was all new to my ears. I had never been exposed to African history through my schooling years, well except for the typical basic Apartheid history of 16 June, Freedom day (based on the public holidays that we celebrate today).

Born in Natal to a working class family in 1935, he was constantly dissatisfied with what he was taught. He knew what he wanted to be taught because he had read so many books. He looked for an academic institution that would be able to educate him further or bring clarity to what he had read. Yet his wish was never fulfilled, therefore he dropped out of higher learning both locally and abroad and went on his own quest to educate himself. This is something that not many students would do because mostly we are convinced that academic institutions provide us with the best possible knowledge. Mr Bunsee made me realise that when coming to education there was no specific place where one can learn, we learn every day and everywhere. We should not only seek the learning opportunities but also challenge what is presented to us.

I was stunned by his depth and insight into African history. He hungered to educate the world on our history getting emotional and caught up in his anger when he shared his rich knowledge. I understood why he seemed so angry; he made me feel like the world is living a lie, or is distorting history.

He reflected on the importance of reading and how it could open up the world for us. The history that he shared with us that day changed my perspective on the potential of the black individual forever. He gave me confidence, made me believe in myself much more. For African history revealed the potential that we have, we are often made to believe that African people do not have the potential to achieve what others (Americans, Asians, Europeans…) have achieved/can achieve, it feels as though we are undermined in everything that we do.

He told us (we were a group of students) a story of hope, one that erased all the negative and patronising content often presented about Africa – a story that needs to be heard, does not start in 1652 and will give Africans millions of reasons to take pride in who we are.

He made me realise “the dangers of a single story”, and it’s potential to distort, disfigure and destroy any other.

His appetite to share his unique knowledge led him to transform his home in Wynberg into a research centre for post-graduate students and researchers. Forever the journalist, he established the Diop/Du Bois Institute and produced a small newspaper, Ikwezi, distributed several times a year.

I had just over 15 books under my ownership, and I thought I was doing quite well for someone who aspires to have a small library in her home one day. After paying a visit to Mr Bunsee, I was embarrassed and slightly ashamed of my progress let alone the types of books that I was reading at the time. He sent me home with a whole new outlook on education, the material that I should be reading and ignited a flame of pride in my life which has been burning ever since that day.

Rest in peace Mr Bunsee. I will honour your memory.

“I will honour your memory”

Expose yourself on TV (Part 3)