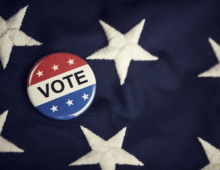 There is an old saying that it gets darker just before dawn. If current polls are correct, the 2018 Congressional elections in the United States may hand over the House of Representatives to the Democratic Party.

Democrats have a knack for snatching losses from the jaws of victory, but also Americans are generally not an educated electorate. Compliant Republicans who, so far, have not stood up to Donald Trump’s demagoguery, may just win again. There are some polls showing a tightening of voter ratings between the two parties. And if that’s not enough, here is a comment from one of the voters “Well, the economy is doing better, so I guess in order for the economy to work we have to sacrifice our civil rights and human decency.”

In the wake of recent incidents where home-made bombs were sent to senior Democrats and the October 27 deadly attacks on a Synagogue, will the arrest of a Trump supporter hurt Republicans in the midterm elections? According to the Washington Post, some Republicans are anxious that voters will connect Trump’s words about his former rival Hillary Clinton and former President Barack Obama with the bomber choosing to target them. But Trump seems worried about the fact that these incidents have slowed “momentum” for the Republicans.

The truth is Republicans have failed to uphold their constitutional responsibility of checking a president who is drunk with power. Throughout the country, minorities and young voters seem to be taking an unusually serious interest in the elections, prodded by Democratic and nonprofit groups that have spent millions urging them to see state and congressional elections as outlets to express their views.

According to a recent survey, 40% of voters under 30 years of age said they will definitely vote in November: 54% of Democrats, 43% of Republicans and 24% of independents. Enthusiasm has risen among both parties and is higher than it was ahead of the last two midterm elections. Trump holds just a 26% approval rating among those age 18 to 29 years. And two out of three likely young voters said they want Democrats to control Congress, according to the survey by Harvard Institute of Politics.

Still, there is some uncertainty about early predictions of a Democratic wave this year despite nearly 40 seats up for grabs. Republicans have masterfully stoked white racial paranoia and tried to convince voters through blatant lies and brazen populism.

Even if the House goes Democratic, the Senate appears likely to stay in the hands of Republicans, which is not good for the country.

Given the way the Republicans have molded themselves in Trump’s authoritarian, nationalist, white-rage image, it is hard to imagine what the next two years might bring. If Democrats win the House but not the Senate, they will, of course, have the power to subpoena and investigate Trump and his aides, they’ll be working with extremist Republicans in the Senate who survive, and who will be less likely to abandon their president in the face of incriminating evidence.

As political analyst Jonathan Chait of New York magazine says: if Republicans manage to hold on to both houses of Congress — something unlikely but not outside the realm of possibility — we would be led not by a party learning to reign in its unhinged leader but one nurtured by him, and the con job he has so far enacted on the people would swiftly come to completion. Imagine waking up on Nov. 7 to discover that scenario a reality. A darker dawn there could not be.

Africa improves in wealth creation but not opportunity

Democrats have a knack for snatching losses from the jaws of victory, but also Americans are generally not an educated electorate. Compliant Republicans who, so far, have not stood up to Donald Trump’s demagoguery, may just win again. There are some polls showing a tightening of voter ratings between the two parties. And if that’s […]

Jamal Kashoggi’s disappearance will not silence us

It has been another tough year for South African business. The euphoria around the change of political leadership diminished rapidly following an announcement that the Constitution may be amended in order to allow for easier expropriation of property without compensation, casting doubt on the future security of commercial assets. This naturally served as a significant […]

A Response to the Call for African Renaissance

A strong lesson a polarized world

“I thought he would end up killing me”