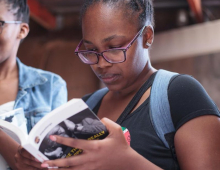 One for the books: Abantu’s bookstore and publishing house

Founder and director of the Abantu book festival, Thando Mgqolozana, spoke to The Journalist about the festival’s bookstore and publishing wing and the role they will come to play in the future of the growing book festival.

In 2015 at the Franschhoek Literary Festival, acclaimed novelist Thando Mgqolozana stood up and opted out, he brandished the festival a space that excludes black writers.

“I’m quitting what I call the white literary system in South Africa,” he said at the time while the predominantly white audience members shuffled awkwardly in their seats. “You can just turn around and look at yourselves – it looks very abnormal. In this country, it should never be like this”.

The book festival is not profit-driven but Mgqolozana remains cognisant of the need to grow the entity as a business enterprise and launched Abantu Publishing earlier this year. Since its inception they have published reprints of Mgqolozana’s previous works, A Man Who is Not a Man (2009), Hear Me Alone (2011) and Unimportance (2014). He considers that publishing house “part of the evolution of the Abantu entity”.

However, Mgqolozana contends that “physical printing is still very relevant but of course it has financial implications”.

On the other hand, the Abantu bookstore sells a wide range of books in all languages with the aim of catering for everyone. The bookstore replaced the designated booksellers which previously occupied the role of retailing literature at the festival.

Speaking to City Press earlier this month, Mgqolozana said the bookstore is a hit with attendees. “At the first edition, we sold more than 6 000 books in three days. Last year, it was probably threefold…The interesting thing about the statistics from the first year [of the festival] is that, contrary to popular belief, black people are buying fiction. It outsold everything else. I didn’t expect that,” he said.

Mgqolozana envisions the future of the bookstore characterised by an online presence that would enable access to the available stock beyond the festival.

Regarding the performance of the bookstore during the 2018 run of the Abantu book festival, Mgqolozana admits “I would have loved for most books to be bought but we sold very well and once we reconcile after closing that will give us an idea about the best way forward for the store”.

Mgqolozana further explains that no concrete decision has yet been made about the future of the bookstore adding that in addition to an online store, there should also be a physical shop established which could operate from Soweto, following in the tradition of the Abantu entity as a whole.

All images courtesy of Mmuso Mafisa and Abantu Book Festival.

Using literature to break down boundaries

One for the books: Abantu’s bookstore and publishing house

In 2015 at the Franschhoek Literary Festival, acclaimed novelist Thando Mgqolozana stood up and opted out, he brandished the festival a space that excludes black writers. “I’m quitting what I call the white literary system in South Africa,” he said at the time while the predominantly white audience members shuffled awkwardly in their seats. “You […]

The children’s faces light up when they see characters that look like them, with names that are similar to theirs

Selling books from the boot of a car

For the record: archivists abound at Abantu

I think more children must come to Abantu next year

Abantu Book Festival: nothing short of an introspective space

"Europe is irrelevant to our history"

Baartman cried out repeatedly to be taken home, and her cries have reverberated through the centuries

The law and dispossession from a black perspective

Land is a hot topic at the moment, especially on the fortnight of the upcoming national election. The Land Is Ours is a must read for anyone interested in how historical injustices and land dispossession affects the land question today. It tells the story of South Africa’s first black lawyers, who operated in the late nineteenth and […]

Born To Kwaito: Reflections on the Kwaito Generation

History needs to be revisited

The Journalist encourages its writers to find their own voices

"My feminism is rooted in my great grandmother, who was headstrong"

Coconuts can’t be trusted with the revolution

“This is my love letter to Zimbabwe; even if it’s biting”

Food is one of the greatest elements of culture

Abantu Book Festival: a safe space for black people to share their vision

And the book lovers did slay

Chigumadzi and Mohulatsi are at the event to discuss their new books. Chigumadzi’s These Bones Will Rise Again (The Indigo Press, June) combines reportage, memoir and critical analysis to “reflect on the November 2017 ousting of Robert Mugabe, radically reframing the history of Zimbabwe to include the perspectives of workers, women and urban movements.” Mohulatsi’s […]