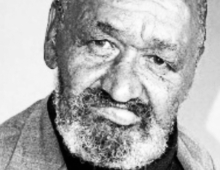 Not just another “dead Sowetan”

Michael Tshehla Phahlane, the man who gave Soweto its name back in 1963, slipped away quietly earlier this month without a single mention in local media despite the fact that he was the real doyen of black South African journalism and one of its finest wordsmiths.

Only the Sowetan carried a 31-word funeral notice accompanied by the standard black and white photo of Phahlane in the weekly In Memoriam section. He didn’t make it in the obituaries page. His huge significance in South African journalism in general and jazz writing in particularly was a fact that the paper’s editorial team was evidently unaware of. He was just another dead Sowetan.

The man nicknamed “The Indestructible” because of his legendary reputation for having survived a number of near-death experiences, lived most of his life in obscurity and died in oblivion, thanks to an uncaring, insensitive and oblivious society. He was the invisible man in the real sense because all South Africans simply refused to recognise the squat, forlorn figure who roamed the streets of Johannesburg as one of the city’s homeless people. He lived a hard and undignified existence, not out of his own choice but because as a country we failed him.

Born 26 March 1921 in old Sophiatown, in 1943 he joined Zonk, the first English language magazine for African readers. He covered a number of beats including crime reporting but distinguished himself as a jazz critic, definitely the first one on the continent. He wore his passion for this noble art on his sleeve and with his elegant but cheeky prose, championed its beauty and cause on the pages of the racy publication. Jazz introduced him to a young and lanky pianist from Cape Town. He loved the shy musician’s efforts on the ivories, but he didn’t like his name. Johannes Adolphus Botha didn’t have a ring of showbiz to it.

So he gave his protégé a new identity – Dollar Brand. The intrepid scribe reasoned that a dollar was the world’s most powerful banknote at the time and his charge was destined for bigger things in the US, a brand everyone wanted to experience its dream. Years later after he went to the United States as an exile, the protégé expressed his gratitude when he recorded Bra Timing From Phomolong, a tribute bluesy, meditative hymn that came straight from the soul of Soweto. It can be found on Abdullah Ibrahim’s 1989 album, The Mountain.

And the old timers will remember Heyt Mazurki, after the legendary 1977 encounter with saxophonist Buddy Tate. There’s also Tintinyana. Originally produced in 1971 in the Peace album, it’s an evocative tune dedicated to Phahlane’s daughter, Nancy, also known as Tintinyana.

She grew up to become a fine lady and brilliant medical doctor but sadly she passed away in the prime of her life. He also lost his only son, Dr Mike Phahlane. The US-based psychiatrist was killed in New Jersey during a road crash in 1986. He was 45. In the late fifties Phahlane Jr. had received a scholarship from the United States Information Services to study medicine at Harvard. His first love was law but the father, an ardent Sigmund Freud fan, convinced him otherwise. At the time of his death he was married with three children. In 1983, Phahlane Sr. was diagnosed with amnesia and confined to Sterkfontein Hospital, a psychiatric institution in Krugersdorp for the mentally challenged as a state patient. One of his inmates was Dimitri Tsafendas. Another one was journalist Basil “Doc” Bikitsha, best known among his acquaintances as Carcass.

When Prime Minister Hendrik Verwoerd was assassinated on 6 September 1966, Phahlane had quipped that Tsafendas had exterminated apartheid. The authorities never forgave him for that. His institutionalisation cost him enormously. He lost his Soweto house and other priceless belongings. “A vengeful father-in-law auctioned off my property just before the authorities sent me to Sterkfontein because I divorced his daughter,” he told me in a 2004 interview. Since his release from the psychiatric institution in 2003, Ntatemoholo Phahlane – as the indomitable nanogenarian preferred to be addressed in his twilight years – has been struggling to get an RDP house. He initiated a series of correspondence with the former Gauteng premier, Mbhazima Shilowa and the Gauteng Department of Housing. His pleas fell on deaf ears. “I’m so angry I could explode. I have just returned from the Department of Housing, at their new 1066 premises in Pritchard Street,” he told a journalist in the spring of 2005.

“Nothing seems to materialise concerning my two-year application for an RDP house near Kliptown railway station. I’m really homeless. As it is, I have no place to sleep. I do not have the slightest idea of where I will sleep tonight. Last night I slept in an open veld in Mzimhlophe. It was also raining. I’m a very worried man. I do not have anyone to turn to.

People I knew in Soweto are long dead and buried.” In his halcyon days he earned the nickname Mike Mazurki, after an American professional wrestler who distinguished himself in Hollywood playing tough characters ranging from bouncers to gangsters.

And true to his moniker, he feared no one – including Sophiatown’s dreaded gangs – the Americans, Berliners, Vultures as well as those in neighbouring Alexandra – the Spoilers and Msomis. An all-round sportsman, he had a flair for golf and in the square ring his hard-as-cement fists were reputed to have sent many opponents into early retirement after they sustained serious injuries. “They call me Mazurki because when I was a kid I was pretty fast with my fists,” he wrote. “Those were the good old bad days of Sophiatown – Magictown, I called it – before they pulled it down and built a place called Triomf, though that sort of triumph I’ve been trying to figure out ever since.”

A man about town, his penchant for the best attire on the market was peerless. “Mazurki dressed like a typical American newshound – broad-brimmed hat (Fedora they called it then), background or Widmark (mackintosh), sleek Florsheim, Robblee or Nunn Bush shoes and other US-made clothing he had a strong penchant for,” Bikitsha wrote in a Sunday Times column headlined My Adventures With The Don Quixote of Soweto. “He lived as hard as his American counterparts because he was nurtured in the Viking atmosphere of Sophiatown and Western Native Township. To a certain extent, he brought that element of toughness in his journalism. He did not fear man or god and was frequently on the receiving end of the stick because of his addiction to the white man’s ‘fire water’. Who was not at the time?”

As editor and columnist at Zonk, he penned a must-read column called Swingcerely Yours. There couldn’t have been a more apt name for a jazz column during the swing era. “I’m no ordinary rapscallion. That’s for sure. I’ve seen a few beautiful dolls in my time and run into a few stray hens,” he wrote in Mazurki’s Zuka, his other column in later years. “I’ve also seen the bottom of a few bottles although these days I am more sober than your average Joburg magistrate – and believe me, I’ve seen a few of them too! By and large, you could say I’ve drunk deep of the cup of life and it’s given me one helluva hangover.” Although Zonk was primarily about the performance arts and hardly political, it was only a matter of time before it caught the attention of the newly elected apartheid masters.

The constant scrutiny and harassment eventually forced owner, Ike Brooks to sell the magazine in 1958. Phahlane resigned in protest and urged his colleagues to do the same. “I was subsequently charged with incitement and intimidation and was involved in a sensational court case in which Nelson Mandela defended me pro bono (for free). I was acquitted.” Other publications he subsequently worked for included included Drum, Golden City Post, Rand Daily Mail and The World.

In 1959 the Johannesburg City Council launched a competition to find an appropriate name for approximately 22 black townships situated south west of the city. The winning prize was ten pounds. After four years of debates and deliberations, the authorities arrived at Soweto – a name Ntatemoholo Phahlane said he entered for the competition. He’s also credited with coining monikers for his neighbourhood (Kofifi), Dark City (Alexandra), Rockville (Moroka) and Kalamazoo (Steve Mokone, the country’s first soccer export). Ntatemoholo Phahlane was 97 – evidence of his legendary never-say-die spirit. Jon Qwelane, writing in the defunct Sunday Star in December 1985 captured his legendary reputation for being the proverbial feline with nine lives.

“Mazurki has been beaten up, stabbed, run over by cars, pushed in front of moving buses, stabbed with blunt instruments, scalded with boiling water and his skull cracked with a brick – he has been left for dead many times and still his physical constitution unbelievably tough, carries him along.”

Over the years a number of documentary filmmakers have shown interest in his colourful and intriguing life, but their projects came to nought due to lack of financial support. Hopefully his passing will rekindle renewed interest in a life that could have been lived with better recognition from society. He would have appreciated that.