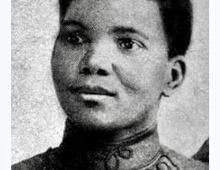 Long before Winnie Madikizela-Mandela and many of the Mothers of our Nation were born, there was Nokutela Mdima-Dube. Not only did she co-found what would later become the now governing African National Congress (ANC) in 1912, she also did an educational newspaper and began institutions still alive in present day South Africa.

Nokutela Mdima-Dube’s contribution to the liberation struggle of South Africa far surpass those of most men and women in history, yet her legacy has been shamefully neglected.

Nokutela Dube (1873 – January 1917)) was ahead of her time, she was the first South African woman to found a school. She was born to Christian converts at a missionary station at Inanda, near Durban. Her school, Ohlange Institute was founded in 1900 in Natal Province, the first school ever to be established by black teachers. It is still in existence today. A true legacy. She co-founded the Natal Native Congress (the precursor to the South African African National Congress) in 1900.

She was a visionary, who along with her husband, the first ANC President John Langalibalele Dube, co-founded the Zulu/English Ilanga lase Natal (The Sun of Natal) newspaper in 1903. The formidable pair co-wrote Amagama a Abantu (A Zulu Song Book), published in 1911, the book regarded as a milestone in the creation of a new type of Zulu choral music. The Dubes are credited with making Enoch Sontonga’s hymn/song “Nkosi Sikelel’ iAfrika” popular. It became part of the South African national anthem after Ohlange Institute’s choir used it. The choir sang it at the South African Native National Congress meeting in 1912. Nokutela taught music, cooking, housekeeping and tailoring, and also sang and played traditional instruments on fundraising tours.

From 1881, Nokutela was taught at the Inanda Missionary Station by Ida Wilcox, who was part of a husband and wife team running the mission. Nokutela was a star pupil and an essay she wrote was published in Ida’s home town in Minnesota USA as part of a regular report she made to the press. Nokutela’s essay was used to show how the mission was inspiring children to learn English.

John was the son of James Dube who was a minister at Inanda. The couple left South Africa in April 1896 and travelled to Britain, sailing for New York from Southampton in May 1896.

By November of that year, their story was being reported by the New York Tribune. Her husband was not the only black South African to visit New York, but Nokutela was unusual because she was female. The Los Angeles Times included Nokutela in their feature series “Women of note” on 13 February 1898.

The newspapers introduced them as Mr and Mrs John “Lindley” Dube, because they could not pronounce his Zulu name and described their “pleasing appearance, her ankle-length dress and her husband’s double-breasted suit”. (This adopted name was the same as that of the missionaries, Daniel and Lucy Lindley, who had established the Inanda mission.) The change in presentation was presumably made to assist American readers who might find John’s middle name, “Langalibalele” too difficult to pronounce. The papers reported that Nokutela would take a home-making course while her husband would train to join the clergy.

Her grace was taming

The couple continued their education at a missionary institute in Brooklyn, New York and John was ordained. She was “young, with blazing black eyes, smooth brown skin and handsome regular features,” says an article first published in the New York Tribune in 1898. “She speaks good English with a deliberation that is charming and in the softest voice in the world. Her manner is grace itself.”

While the Dubes were in the US they were inspired by the iconic African-American educator Booker T. Washington, but their main training came from the Union Missionary Training Institute where 30 to 45 Christian missionaries from Europe, Asia, Australia, Arabia, and in this case, Africa studied.

A legend in Minnesota to date

In this mid-western US state, the Dubes had studied in Minnesota where there were old records of their visit in the University of Minnesota’s library.

Professors at the Carleton College in Northfield, Minnesota discovered John and Nokutela’s story and set out to tell the world about this amazing woman. Her story was told to the world by a black, Mali born Professor Keita and not the “historians” of the ANC she co-founded.

When her estranged husband John Dube, then President of what would become the African National Congress, heard of her illness, he brought her to a house they owned in Sophiatown in Johannesburg for treatment. She would die of kidney infection shortly thereafter in 1917 at the age of 44.

She was buried in Johannesburg but her unmarked grave had no headstone – just a reference number, CK9753 – the CK standing for “Christian Kaffir” (a racist term for a black person, widely used at the time).

Her funeral over a century ago was attended by Pixley ka Isaka Seme and other prominent members of what was to become the African National Congress (ANC).

She is buried at the Brixton Cemetery in Jo’burg, where many residents of my own birthplace of Sophiatown are buried including my Mom’s Dad and her brother, my Grandfather Tatolo William Chalo and my Uncle Joseph Chalo. May she forgive the people she loved and gave her young life for, for forgetting about her with her grave lying in plain sight.

Proud and pleased to tell the story of this remarkable and pioneering spirit.