We, Afrikaners, have always understood journalism in a different way from other peoples. Just compare Die Burger with the Argus and Cape Times. … We, who write, are always aware of our readers. You see in front of you this one and that one, and you share with them things and discuss with them an issue. … In other newspapers it is not the case.”


M E Rothmann
- the first female editor of Die Burger’s women pages, assessing the journalism that existed for her in the early twentieth century

This could be regarded as a problematic viewpoint which could lead, as it eventually did, to a kind of journalism that blindly supported apartheid, but for me it also illustrated a deep desire to develop and practise a kind of journalism that would restore and lift up a devastated and downtrodden people. This much more of an issue today, when we are bombarded with fake news and anyone can spread their ‘truth’ as long as they have money to invest in marketing. How easy it is found a Facebook fanpage dedicated to whatever cause you wish, then get it some likes from The Marketing Heaven, and there you have it, you just became a sought after piece of news.

Maria Elizabeth Rothmann (writing under the initials M.E.R) was one of the first Afrikaner women to pursue journalism as a career, from 1920 – 1922 at the magazine for women Die Boerevrou in Pretoria, and then from 1922-1928 at Die Burger in Cape Town, where she began the era of professional Afrikaner female journalists as the first editor of the newly established women pages.

Born on 28 August 1875 in Swellendam, M.E.R. was also one of the first South African women to attend university, and received her BA degree from the South African College in Cape Town (later to become UCT). M.E.R was a teacher firstly in Johannesburg, then in Grahamstown, where she met and married Herbert Oakshott, a school principal, whom she divorced nine years later.

About her education she had this to say: In the South African College respect for “English culture and traditions were cultivated in us … from very young it was drilled into me that whatever is English, is good; whatever is Afrikaans, is less good… I learned to believe in British fair play, British justice, British honour, the English gentleman”.

What changed her life was the Jameson Raid, an inciting factor in the Second Boer War.

“It pointed in a lightning-like decisive moment where we had been led to – a denial of who and what we were, to exchange that with a fake who and what of a different nation, something false and useless. Upset, but preserved, we survived this time of stupidity.”

Initially she wrote short freelance pieces for Die Boerevrou that was of such interest and quality that she was asked to join the staff. Under the leadership of editor and owner, Mabel Malherbe, she quickly picked up the rhythms and conventions of gathering and preparing focused, interesting and accessible copy. One can say that it was here that she began to hone the simple, sparse but luminous style that was later to become her trademark and won her the coveted Hertzog Prize for Afrikaans prose forty years later.

When M.E.R. moved with her two children to Cape Town, the editor of Die Burger made it clear that the women’s pages should ‘stay away from politics’. Initially she agreed, because “nobody would regret (staying away from political issues), as one becomes so tired of the bickering…”, but subsequently she happily did the opposite!

Politics for her was a very wide theme that included women’s suffrage and understanding the different worlds of urban and rural women. She regularly ridiculed the notion of the weaker sex and often responded in the newspaper to public remarks aimed at women. After seven years she left Die Burger but continued for a decade to contribute articles in which she exercised what she called; “being partial to women” (vrouepartydigheid) and never flinched from taking on important men such as the beloved Afrikaans writer C.J. Langenhoven who once had to withdraw publicly ‘an unfriendly remark’ about women.

M.E.R. regarded her mother as the first feminist she knew. When her mother sent her daughters to university she was asked whether she did that so that they could get husbands, to which her mother responded: “No, I send them so that they can live without husbands, if they so prefer.”

Just as she regarded Afrikaner journalism as differing from journalism in English, so M.E.R. saw English feminism as something different from Afrikaner feminism. Her legacy was a feminism deeply embedded in the struggle of the masses of post war impoverished white families -many living in shacks at the edges of towns, cities and on desolate pieces of land.

Afrikaner women were apprehensive about feminism, she suggested, because the whole movement was “English in origin and sentiment”, while “we were busy with our struggle against impoverishment and degeneration, with our whole struggle for rehabilitation”. In this effort she accepted that feminism had a definite role, but in a different way from the movement propagated by English-speaking women who “cared little about the issues of vital concern to Afrikaners”.

Nationalism for Afrikaner women was a “simple thing …. Love for one’s own people and a desire to make of them a healthy, intelligent and honourable people; sadness about backwardness on any terrain over which these three characteristics should govern.”

Several scholars have shown how this insistence of being different from others by siding unequivocally with ‘one’s own’ had led to contradictions. For one, there was the disempowering concept of the ‘volksmoeder’ (mother of the nation) fuelled by the content of the women’s pages of Die Boerevrou and Die Burger. But to her credit, M.E.R. at least dared to ask in her column: “Are we not going astray if we think of the welfare of the Afrikaner or of the white population as our only task?” 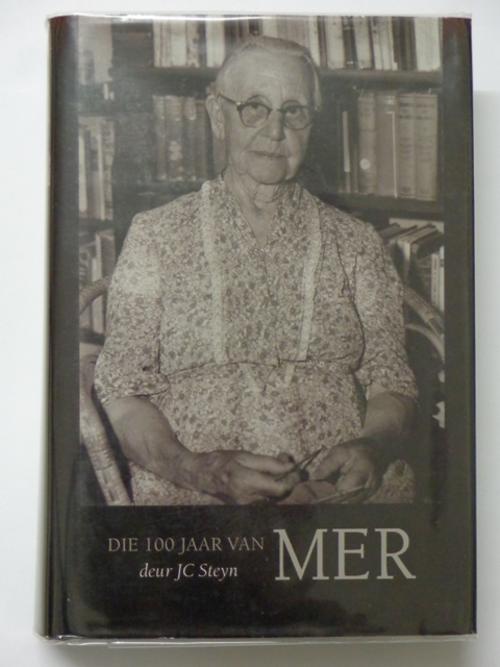 M.E.R.’s voice about social inequalities became so strong and articulate that in 1928 she was appointed organising secretary of the Afrikaanse Christelike Vroue Vereniging (A.C.V.V), and travelled the country investigating the “poor white problem”. Two years later she became the only female member on the Carnegie Commission which initially did not feature the question of women as a separate category. After her sociological study on the problems of mothers and daughters in poor white families, her report was published as a separate whole.