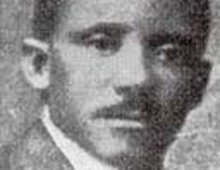 Daniel Simon Letanka, a politician and journalist, launched his own paper at the time of Union in 1910 and spoke out loudly against the injustices suffered by black people under English and Afrikaans colonial rule.

Daniel Simon Letanka was in the prime of his life when South Africa became a Union in 1910.

The then 36 year old newspaper man and politician strongly expressed his disapproval of an arrangement that was essentially designed to protect and advance white English and Afrikaner interests.

It was less than a decade after the Anglo-Boer war and the rights of black, coloured and
Indian citizens were greatly limited, where not completely absent. It was only in the Cape that franchise rights were extended to black people, but only to the few that owned property.

South African History Online describes the period that followed;
“Repressive measures to entrench white power were not long in coming – the Masters and Servants Act, the reservation of skilled work for whites, pass laws, the Native Poll Tax and the 1913 Land Act which reserved 90% of the country for white ownership.”

Letanka was born in 1874 in Saulspoort in the Rustenburg district of the Transvaal and went on to study in Grahamstown at the Native College. He was a proud Mokgatla (Tswana) man with integrity and a Setswana custodian. He earned respect from his peers and writers such as Sol Plaatje and Thomas Levi Mvabaza. He passed away in 1932 at the age of 58.

When he was born there were already Setswana newspapers existing. The first one was the pathfinder, Molekudi ua Bechuana (The Bechuana Visitor) that operated in 1856 and 1857. The second one was Mahoko a Becwana (The Bechuana News) which was a monthly review of current news and religious matters. The third one was Moshupa-tsela (The Guide) which was a missionary paper that was a monthly. The fourth one, Koranta ea Becoana (The Bechuana Gazette) was founded by Chief Silas Molema in 1901. It was an English publication and ran for seven years at Mafikeng.

Letanka’s life as a newspaper man

In 1910, Letanka launched his own paper, called Motsoalle (The Friend). He later changed the name to Morumioa (The Messenger). Morumioa was a weekly paper published and printed in Setswana in Johannesburg. In 1912 Morumioa was merged with Abantu-Batho of Seme. In October the same year the first issue of Abantu-Batho was published with Letanka aboard as the editor of the Sesotho section.

It was a Pan African paper that attracted him because it aligned ideologically with his own worldview. The paper was a mouthpiece for the SANNC (ANC), the party he became part of.

According to Tim Couzens, in A Short History of “The World” (And Other Black South African Newspapers), Seme persuaded Letanka “to merge his newspaper with the proposed company” to found “a strong national newspaper”. Seme, Letanka and Queen Labotsheni of Swaziland spearheaded the company as well as the newspaper. Abantu-Batho was launched in 1913 with Cleopas Kunene as English and Zulu editor while Letanka became a Sesotho editor.

He was a deputy president of the Transvaal Congress and one of the principal drafters of the 1919 constitution of the ANC. When the SANNC led the ‘bucket strikes’ of 1918 he was one of the leaders charged with incitement. The Bucket Strike was carried out by African sanitary workers, 152 of which were sentenced to two months imprisonment for breach of contract, under the Masters and Servants Act. The idea of the strike first arose at a meeting held at the African Club in Johannesburg in June 1918. The club that was launched in 1915 was used by Letanka and Abantu-Batho as a base ‘…for political and social meetings’, and was inspired by Seme who enjoyed club life in Oxford, in the UK.

Letanka, William Mhlongo, Horatio Bud-Mbelle, Richard Msimang, Thomas Levi Mvabaza and Ferdinand Mautu were present. All Congress meetings were also held there, including the 1915 big concert that was hosted to raise funds for the Congress.

Their meetings for recreational purposes after work were also a platform for them to discuss Abantu-Batho and the ANC as well as what is going on in the country at that time and what they could do to fight the empire’s repression. Letanka was totally against British imperialism.

The International of 8 August 1910 cited that Abantu-Batho later published the article titled, “Are We the King’s Subjects”. The article questioned the hypocrisy of the British King when he marginalised black’ rights when the Union was promulgated in 1910.

“Deputations…for the redness of constitutional grievances have been ignored with the usual hypocritical remark that the King is the protector of all his subjects. His Majesty did not even hesitate to declare before our countrymen in France that they and ourselves were his subjects equally…But it is nonsense for any King to speak like that at the time of fighting and then ignore the same people in the time of peace…Let him tell us we are no longer his subjects.” (Cited in The International, 8 August 1918).

Politics and Journalism for Letanka were inextricably linked. He could not separate one from the other because the former was the context and the latter was the methodology he used to make sense of the context. He could be described as a protest journalist. When he rested Morumioa he didn’t change his tongue but continued to be a custodian of Setswana under Abantu-Batho as the Sesotho editor, Sesotho as the umbrella term for Western (Setswana), Southern and Northern Sesotho (Sepedi).