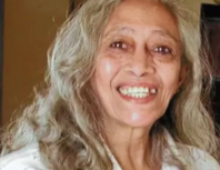 It is with deep sadness that we learned of the passing on of veteran journalist and media icon and writer Juby Mayet. We are thankful that she was exemplary in her selflessness and service through the word. May her soul rest in peace.

Veteran Drum journalist Juby Mayet was honoured for her role and contribution to journalism at the SABC. All she got was a bouquet of flowers and a travel bag as a present.

There were no award prizes nor certificates of recognition. No doubt there was a lot of love, warmth, admiration and respect in the room. But so-called black journalism has always been a thankless job. It exists to make money for shareholders and not necessarily to pursue the Truth.

As Professor Saths Cooper explained, it is a drug used to dull African minds. But the brave and courageous Mayet took to the field by joining Jim Bailey’s Golden City Press in 1957. She was one of the very few women to found commercial black journalism. In 1962 she joined Drum magazine until 1970. In 1974 she hopped to True Love to be a columnist. After 1976 she helped to launch The Voice. This was a political weekly that saw her detained and in 1978 she was “banned” for 5 years. She was prevented from working as a journalist and drifted to working as a cleaning floor supervisor, switchboard operator and legal typist for law firms.

Mayet was a qualified teacher from the Johannesburg Indian Teachers Training Institute. She did not matriculate and would not have been admitted at any “white” university to study towards a Bachelor’s degree. But this did not stop her from using her writing talent to feed the hunger for information and knowledge among African people.

She was born in Fietas (Vrededorp), a soul nourishing non-racial community that was destroyed by the Group Areas Act in the 1950s. Blacks were removed to Soweto while Indians were forced to relocate to Lenasia. The thing about Mayet and her generation is that they bore the brunt of the apartheid jackboot. It is correct to say they are the custodians of the soul of South African society.

She was there in 1955 with the adoption of the Freedom Charter. She witnessed the PAC breakaway from the ANC in 1958. She covered the Sharpeville massacre in 1960. She was part of the rise of Black Consciousness and was pivotal to the formation of the Union of Black Journalists. She was there in the time of the Soweto student upheavals in 1976. She saw the 1983 launch of the United Democratic Front. She witnessed the 1985/86 education crisis. She has lived through the release of Nelson Mandela et al that culminated in the rise of democracy and freedom.

She has been recognized by the BC NGO sector so to speak including getting the Steve Biko International Peace Award. But has yet to be noticed by the state for her role and contribution to journalism.

It is correct to say black journalists, especially women, have rarely been acknowledged and reaffirmed for their role in the media. For instance, Mayet’s columns can be put together into an anthology for student and society to judge her voice and role. She is one woman who used her intelligence and life to be a living example of what it means to be a true South African citizen long before 1994. She is one of a relatively small group of so-called coloured journalists who have transcended racial barriers.

She knows and understands what it means to live in peace with African people. She is acutely aware that for peace to prevail, there must be economic justice. The SABC must be commended for its unconditional support to recognize Mayet.

She has given her life to do a thankless job.

“The brave and courageous”

Meeting Juby Mayet, was like visiting with mom. Long white hair sitting at her waist, she came across like a mystic even though her oeuvre was journalism. The mysticism was warm and inviting – she was great company any time of day. She seemed to have been around when manners were still handed out at […]