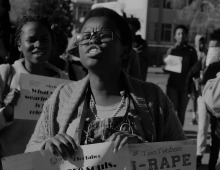 Strike a woman, strike a rock

August marked 61 years since the monumental women’s march to the Union Buildings. This month symbolises a time when women are highly celebrated in the South African community. Nwabisa Timeni reflects on how much violence towards women clouds this celebration.

More women experience sexual violence than their male counterparts. 71.3% of them, to be precise, according to a Victims of Crime Survey Data report released by Stats SA.

Violence against women continues to be a recurring subject in South Africa. This, despite the fact that Women’s Day is celebrated every year on 9 August. This day commemorates the approximately 20 00 South African women who marched to the Union Building to protest against the Pass Law Act of 1952.
But six decades on, how effective is our current generation in fighting against the gruesome abuse of women? How and why do our abusers get away with violating us?

The most recent incident to prompt public outcry was the attack by former Deputy Minister of Higher Education, Mduduzi Manana, and some friends who were accused of assaulting a young woman and two of her friends outside a nightclub in Johannesburg. The accused allegedly slapped the victim, leaving her with bruises and cuts. Later, Manana was granted bail of R5000 at the Randburg Magistrate’s court. He has since issued an apology and resigned from his post.

Violence against women has evolved to a point where the leaders of this country can beat a woman and walk away with no punishment worthy of their atrocious acts. Such heinous acts are the reason why women today have lost faith in men, especially the male leaders of our country. One of the only ways to vent our frustrations, raise awareness and fight back is with hashtags like #MenAreTrash.

Women are constantly reminded about how we are failed by society as well as the men that live in it. There are numerous complaints and crimes committed by men that are reported daily. Kate Chiloane, 30, was shot and killed by her husband in full view of her Grade 2 learners at Sedibasathuto Primary School in Bushbuckridge, Mpumalanga. Horrific reports have come from Pietermaritzburg where three men have recently been arrested after having allegedly raped and killed women before eating them. What do women, mothers, sisters, girl children do during this time when their basic human rights are being violated to such an extent? My generation of women have no choice but to rise against this status quo of violence against women.

Students at the University of the Free State recently held a gathering to draw attention to rape culture and sexual harassment as well as the lack of sexual harassment policy at the university. Many students participated in a march and conference to vent their frustrations and one of the organisers of the event, Tammy Fray, said she ‘felt positive’ about the outcomes of the day.

“The turnout wasn’t as great as we wanted it to be but the conference thereafter was really good because the audience had males and females in it which was really exciting for us because usually topics like rape and anti-rape culture only attract females. This issue is one of the most prevalent at the institution,” said Fray.

“We have no sexual harassment policy at the university…it will only be approved next year after seventy years of the university’s existence. I feel very excited about women’s month because it’s an opportunity for us to visit the issues we keep brushing off. It’s not having respect for a woman’s voice, its treating women like second class citizens and dismissing issues like rape and sexual harassment on campus that make this month so important,” said Fray.

Men and women are equal and we all have equal rights. Men in our society need to stop thinking women have no voice and no rights because we do. The question remains, Senzeni na? What have we done?