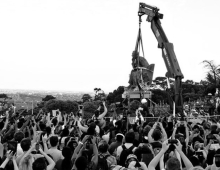 The call for the fall of the statue of Marthinus Steyn on the campus of the University of the Free State is not an effort by the students to take away parts of our history. It is, in fact, the direct opposite. The call is, when looked at earnestly, the students’ radical acceptance of the country’s history.

It all began with a dance a student had in front of a statue while holding a bucket full of faeces; a moment where art engaged art, where the course of history institutions of higher education in South Africa took a drastic turn. The student danced, flinging faeces at the statue. And once he flung the first batch of faeces on the statue of Cecil John Rhodes at the University of Cape Town, there was no turning back from the critical engagement that South Africans were about to have regarding the legacies left behind in institutions that they are proudly calling their own.

It’s been three years since that historic day at the University of Cape Town, and the engagements that have followed it have left in their trail of blood, sweat, tears, and death.

The student’s name was Chumani Maxwele. He was a fourth year Political Science student at the university, and his dance was a call for the fall of the statue on the campus. His call went beyond that, though. By flinging batches of faeces from portaloo containers from a nearby township at the statue, Chumani was also calling for a critical look at the current conditions of Black people in the country – tying them to the violent history represented by the statue upon which the faeces now rested. His action cut through the barriers of time, calling for a critical assessment of the past using the present and vice versa.

Little did Chumani know, as he flung the faeces on the statue, that his actions would spark a nation-wide movement calling for similar critical engagements with legacies left behind by the country’s violent past.

It’s now 2018, and a similar call for the fall of a statue is being made by the students at the University of the Free State. While not as theatrical as Chumani’s call in 2015, the call for the fall of Marthinus Steyn’s statue at the Bloemfontein Campus of the university also carries with it the same time-crossing critique of the conditions people on campus have to live under. It also carries with it something else, though. It carries with it a critique by some that it is nothing more than the students wanting to take away parts of South Africa’s history that are important to other people.

This is not true, and there are many reasons for this. In more ways than one, the call for the fall of the statue on the campus is not an effort by the students to take away parts of our history, like people claim it to be. It is, in fact, the direct opposite. The call is, when looked at earnestly, the students’ acceptance (a radical acceptance, at that) of the country’s history.

The call for the fall of the statue came as a result of the students’ deep scrutiny of the role that a symbol of its nature has on campus, and an evaluation of whether or not they would be okay with condoning such a role. After years of this scrutiny, the students realised that, by leaving the statue where it now stands, they are in actual fact condoning the violent and dehumanising history it represents. So, by calling for the statue to fall, the students are asking the university’s management and the student community as a whole to radically accept this violent history and act in a manner that condemns it. As a result, the call for the fall of the statue is not a call for the negation of the country’s history; it is, in fact, a radical acceptance of this history, and a call to those who have the power to, to condemn it in the highest manner possible.

This call brings to the fore another important question, though: what needs to happen to the statue after it is removed? Well, a possible solution was given by philosopher and political theorist Achille Mbembe, during a talk he gave at the Wits Institute for Social and Economic Research (WISER), University of the Witwatersrand (Johannesburg), titled “Decolonising Knowledge and the Question of the Archive”.

In the talk, Prof. Mbembe makes a suggestion that a possible solution to the problem of what to do with the statues after they are taken down would be to create “a new kind of institution, partly a park and partly a graveyard, where statues of people who spent most of their lives defacing everything the name “black” stood for would be put to rest.”

This solution, while being one of many, is by far the most practical and achievable. It is important because it also calls for the rejection of building museums for these statues – an act which, on its own merit, is a very problematic one. It’s problematic in the sense that, by building or putting these statues in museums, we would be memorialising them in a way that suggests that their symbolic meaning is something worth preserving; we would be suggesting that they deserve to be curated for the purpose of being viewed, or, more precisely, admired.

Our voices: Long may they be heard

“Until the lion learns how to write, every story will glorify the hunter”. ~ African Proverb The Journalist’s sub-section Kau Kauru, roughly translated to “making a noise with voices” in the /Xam language of the Bushman people of the Northern Cape, is home to the voices of students across South African universities. The pieces in […]

Voluntourism: Westerners playing saviour is dangerous to all

There are several flaws alongside the positive aspects about volunteering services. And the lack of critical reflection can create double standards and an industry which fails to understand its own consequences. I am an alumni volunteer and I participated in the South to North volunteering programme. The programme is basically an exchange programme, an African […]

It all began with a dance a student had in front of a statue while holding a bucket full of faeces; a moment where art engaged art, where the course of history institutions of higher education in South Africa took a drastic turn. The student danced, flinging faeces at the statue. And once he flung […]