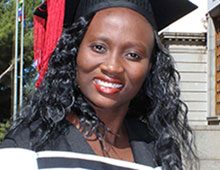 How to survive your first year

Adapting to life at a tertiary institution is not easy. At the University of the Free State (UFS) the Rector encourages the fresh intake by recounting his own failure to make the grade. A young student who is halfway through his first year, picks up on the Rector’s advice with a heart-warming story of perseverance.

“I failed my first year at University. The reasons were very complex – a language barrier, hunger and back and forth travelling,” says the Vice-Chancellor and Rector of the University Of The Free State Prof Jonathan Jansen.

When I heard this statement I was filled with disbelief. I felt a bit anxious. I could not believe that the very same man addressing a crowd of students had turned his life into a success even though he failed his first year. Perseverance, they call it.

University can be a very challenging environment especially for the newbies. I have first- hand experience. You arrive on campus and realise that the environment is totally different from the one you’re used to. There is a sudden shift from being spoon-fed to taking responsibility and from dragging your feet to having to adapt quickly.

Here is one example. I’m sure some will share my sentiments: Managing a monthly allowance as a student is at times a difficult task. Back in high school it was simple. Now we sometimes spend long hours on campus because of the work we need to do and end up spending much more on food and drinks. Anything to keep the energies high.

How do you cope? How does one survive? It is not easy but you’ll be happy to know that you aren’t alone and that there are people who want to see you flourish and succeed. Prof. Jansen is one of those Good Samaritans. He addressed first year students on ‘how to survive your first year’ and the guidelines he mentioned will be of great use to each and every student, not only us first years.

These are some of his guidelines:

1.There’s nothing wrong with you. Don’t be intimidated by the university. “I used to feel anxious all the time thinking that I’m not university material,” he said.

2.Don’t depend on notes. Attend class and make sure that you’re present all the time. No one spoon feeds you.

3.To really succeed, you need to work harder than anyone else. South Africans are in a culture of laziness. We often delay things, like Afrikaans idiom says; “Môre is nog ‘n dag”.

4.Move forward but keep an eye on the rear-view mirror. As you move forward, look backwards regularly. That should remind you why you’re moving forward.

5.Imitate successful students. Ensure that your friends are smarter than you and that they lift you up, not drag you down. Hang out with the clever kids. I’m not saying dump all your old friends. I’m simply saying think of yourself first at all times.

6.Beware of falling into victimhood, it will destroy you. We have issues such as xenophobia because people fall into victimhood. Louzanne Coetzee, a blind student at the University of the Free State received her degrees recently. Poverty, blindness, disability or a dead parent shouldn’t be the reasons for you not to succeed. Louzanne Coetzee’s story made me realise how fortunate I am and that I have no excuses.

7.If you fall, get up. Stand up with a different attitude. Patience is a virtue. So is perseverance and persistence. We need to teach ourselves that life is full of obstacles and adversities. One slip up doesn’t make you a failure or a loser.

Bad Semester Ends On A High

I’ve been at UFS for half a year now and I’ll tell you it was not a good six months for me. No, it’s been a very bad semester that ended on a good note. I took a gap year last year and throughout the first semester it was tough for me because I had taught my mind not to do anything.

I’ve had days when I did poorly in tests. Days when I skipped tests because I was intimidated. Days when I just wanted to give up. But I realised that in anything you do, you get what you give. After realising that, I worked harder and smarter and ended up getting good grades for all my seven modules.

I asked some of the other first years to share their experiences with The Journalist and this is what they said:

Werner Smith, a media studies and journalism student said: “It’s been such fun. But busy man. The work is different from high school. University is a world apart. It’s been hectic but fun.”

Anathi Nyandu, a third year media studies and journalism student said: “Lol… it was just cool man. But being in res had its ups and downs. All the uniform rules. Varsity is an experience in itself.”

Sometimes I worry about not passing or worse still dropping out. I think it’s in our nature as human beings to worry about failure. These thoughts aren’t pleasant at all, trust me. But the ultimate result rests with me as an individual. Whether I succeed or not is really up to me. In plain English, it’s do or die. At least that’s what my father always tells me. He says that my success is in my hands. Judging from the talks I’ve had with him, if I were ever to mention failing or dropping out, he would look at me as if I’m crazy.

We all have aspirations and one of Prof. Jansen’s aspirations is to make sure that students don’t drop out but pass and graduate. That’s going to help me get through the rest of this tough year.