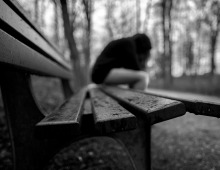 Confessions of a suicide survivor

According to a report by the South African Depression and Anxiety Group (SADAG) in 2014, there are as many as 23 suicides per day in South Africa, and two thirds of all suicide victims are aged between 20 and 39. The NGO stated that these statistics could be higher due to stigma associated with depression, suicide and self harm. Statistics are hard to come by as there is no organisation or government department formally collecting data on suicide rates. However available data indicates that teen suicide is on the rise with one in four South African teenagers having attempted suicide. Despite these shocking numbers, suicide as an issue remains hidden from society. In this piece, Boikanyo* ends her silence and speaks out about her own suicide attempt.

Today was no different from any other day but yet, the void and emptiness within, grows deeper and my world keeps on getting darker, day by day. I walk down the corridors of school with the hopes that someday someone will notice me, accept me, appreciate me or even take note of my presence. I feel so invisible and unloved.

But I believe I should blame myself. Why?

As soon as I leave my room, I put on the biggest smile and my energy levels increase to 100% , which may give people the impression that everything is “all good” but it isn’t.

Monday-Sunday, I wake up, walk, talk, sleep, sing and even dance with the thought that “I AM NOT GOOD ENOUGH”, but I’m sure you’ve already picked it up from previous entries. It is nothing new, and I always sit and wonder, when will things change? When will it be different? Different in my favour. I want to be popular, I want to be seen and taken seriously. I want to be told I am beautiful, I want people, old and young to look up to me the way I look up to them.

Lately, I’ve been having thoughts of ending it, the pain and hurt. I have been contemplating committing suicide. I feel like the place that I might end up in would be so much better than here. Other people can enjoy living in this world, they enjoy it so much that they do not want to leave anytime soon, but not me. I am tired and want to be re-united with my God, well I hope I will be.

These feelings are not new. At 15 years old I wrote an sms and tried to commit suicide:

“Mama and Daddy, thank you for all that you’ve done for me. You took me to the best schools, bought me the best clothes, you basically gave me a very comfortable life, and for that I say thank you. But it just was not enough. I am not happy. Everything else in my life is not perfect … I am tired of this life, this world … I LOVE YOU both so very much”

The day I wrote that message I woke up that morning as if it was any other day, however, that particular day felt weird. Although I could not pin point why it did. I got out of bed, bathed and got ready for school. I was the last one out of the house and got yelled at in the car for making the rest of the family late for work and school.

At school, it was a regular day. I behaved in a manner that I usually do always talking, singing, laughing, and making unecssary remarks in class, making people smile, making them believe that life is great, but little did they know.

Five o’clock eventually struck. I was picked up from school and we headed home. I went upstairs straight to my bedroom, changed into my pajama’s, and felt heavy, depressed. I got into bed and slept right away. 20h00, my alarm rings. I ate supper, watched all the soapies starting first with Generations and ended with Muvhango. Around 21:30, my family went to bed, the time I knew I would be alone, alone with no disruptions whatsoever.

As I laid there on my bed, thinking about everything that was wrong in my life, I felt a strong pain in my chest and then the tears just started rolling down my cheeks. It started off slowly but the more I pondered, the more I cried. I cried so much that I began to feel so tired, both mentally and emotionally. I was tired of life, tired of feeling the way I did. Then the thought clearly appeared in my mind, just end it.

I thought about the “paradise” that people always spoke about after death. I too wanted to go there, to be happy, to feel joy, and to be loved by all. I wanted to go to that place where there was no more pain, no more hurt and no more violence. I decided that it was the next destination for me. I took out a few prescribed pills, some of which were my dad’s and the others were over-the-counter pills, and placed them on my desk with a blade beside them. I took out my phone, and sent her my “farewell” SMS and immediately switched my phone off.

A few minutes passed, and before I did anything, my parents abruptly walked into my room. They were shocked. They sat down on the edges of my bed and looked me into my eyes that were puffy and full of tears, and asked me what was the matter. I told them that I was not happy, even though I smile and laugh every day, there are so many things that make living seem so unbearable. They tried to comfort me and concluded that later that week, I was to consult a psychologist. Of which I eventually did a few days later.

According to the South African Depression and Anxiety Group (SADAG, a mental health and advocacy group that supports many individuals with various mental disorders), suicide rates among teenagers belonging in the age group of 10–14 has almost doubled in the past 15 years.

One must detect the signs early (if applicable) and if you or someone you know may be suicidal, act quick, and contact someone or an organisation that can assist you or that person.

*Not her real name

Confessions of a suicide survivor

Lindiwe Bartman: Women must be bold