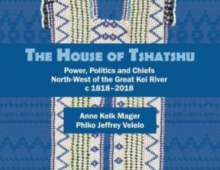 The House of Tshatshu: Power, politics and chiefs north-west of the Great Kei River

The House of Tshatshu: Power, politics and chiefs north-west of the Great Kei River is written by Anne Mager and Jeff Phiko Velelo. In rural South Africa today, there are signs that chieftaincies are resurging after having been disbanded in colonial times. Among these is the amaTshatshu of the Eastern Cape, which was dis- established in 1852 by the British, and recognised once more under the democratic ANC dispensation, in 2003. The authors are both closely associated with the land and the people of the amaTshatshu. One is a historian, who grew up on their land, and the other is counsellor to the chief. As such, they bring their knowledge and respective skills to bear in this book.

‘In Africa, the encounters of the past are very much part of the present’. This is a story of conquest, dispossession and un-naming. It begins in the mid-1820s when Bawana, descendant of the Thembu chief, Tshatshu, and a group of about 3 000 followers crossed westwards over the Tsomo River, the northern tributary of the Great Kei River, into Bushmanland. Their move was a planned migration from the Mbashe River where hordes of newcomers had led to congestion and conflict. They were followed by several minor Thembu chiefs. Bushmanland offered a vast expanse of grazing; it was sparsely populated by the Khoesan who roved the area in hunting bands. To the Khoesan, the abaThembu were known as the Tam’bou’ci. Unable to articulate the clicks, the trekboers pronounced it Tambookie and this form entered the written text.

While there were no recognised boundaries, Bushmanland was understood to stretch from the Stormberg in the north to the Amathole mountains in the south, the boundary with the Cape Colony. To the west, isolated boers grazed their cattle on the upper reaches of the Fish River where the town of Cradock was established as a frontier stronghold in 1814. Over the next three decades, large numbers of abaThembu crossed into this territory and drove the Khoesan to the margins as they moved westward, thereby opening a new frontier for the expansion of Thembuland. Bushmanland became known as Tambookieland.

In the 1830s, they came into conflict with the British as the territory became a frontier for colonial expansion. By the 1840s, the abaThembu west of the Tsomo River numbered over 40,000.

We use the terms Tambookie frontier and north-eastern frontier interchangeably: Tambookie frontier indicates the westward expansion of the abaThembu into Bushmanland and the creation of an ‘external’ frontier that extended Thembuland. This westward move was countered by the British seeking to expand in a north-easterly direction from their colony south of the Amathole mountains. External frontiers occurred in African contexts when people moved outwards from the centre to get away from local problems or to take up new opportunities. In imperial discourse, the idea of frontier implied a boundary, a limiting zone that separated spaces and people from one another.

Colonial frontiers were created in the process of conquest so that imperialists sitting in Britain and those sent to colonise the frontier might define and shape these spaces. They did this both by cartography (drawing physical maps) and by attempting to impose control over the social and political domains. Scholars prefer to see these colonial frontiers as zones of indeterminate, unstable authority and shifting boundaries.

Across the frontier zone, the British used racial, cultural and gender markers to identify themselves as superior and to distance themselves from indigenous ‘others. Constantly challenged, this process of imposing supremacy was never complete, and the frontier zone remained highly unstable and politically volatile. From the 1830s, violent encounters characterised the Tambookie frontier. Most violent were the wars between colonists and Tambookies, but conflict occurred within and between groups of abaThembu as they sought out choice grazing and water points, settled scores and accumulated cattle in this new zone.

This internal conflict or ‘interstitial frontier conflict’ as Igor Kopytoff calls it, was a feature of external frontiers and occurred between those connected by name, history and sometimes descent. The degree of autonomy enjoyed by Thembu subgroups meant that they were accustomed to tensions, competition and shifting alliances. What was different on this frontier was that internal conflict was intertwined with colonial encounter, and with attacks against the indigenous Khoesan. Violent clashes complicated Thembu politics and weakened anti-colonial resistance. It also compromised the leadership of the Tshatshu Thembu chief, Maphasa, who took over on the death of his pioneering father, Bawana.

In 1852, towards the end of the Eighth and bloodiest Frontier War, the colonial governor Sir George Cathcart issued a devastating proclamation against the amaTshatshu declaring that ‘The name and independence of the tribe of Maphasa will cease … the remnants of his almost annihilated tribe will be dispersed among others’. A few months later he gloated, ‘I have broken up and banished his tribe, and forfeited his land … The wreck of his people has mixed and merged with other tribes.’

Over 3 000 standing men and their families, the largest group west of the Tsomo River had been cut down by colonial scheming and the flourish of the governor’s pen. They were removed to the newly created Tambookie location where they resided alongside various smaller Thembu groups. A century and a half later, South Africa’s democratically elected government revoked Cathcart’s banning and recognised the House of Tshatshu (ubuzwe bamaTshatshu) as a sub-house of the Thembu nation (isizwe sabaThembu). Their official namelessness and enforced obscurity came to an end in 2003. But the political and personal consequences of an obliterated history cut deep, with the wounds appearing in later generations as scar tissue. By the dawn of the 21st century, young and old were clamouring to find out more about their past: Who are we? Where do we come from? What is our history?

Questions came from cities and towns across South Africa and from the rural villages where Maphasa’s followers had been ‘mixed and merged’ so long ago. In 2003, a group of amaTshatshu established a website so that those in search of their past might link up with one another. A few years later, Aubrey Velile Somana published a preliminary history of the amaTshatshu.

Ethnicity-making was not their motivation. Rather, these leaders were informed by a deep sense that history creates a sense of belonging and that story-telling identifies who one is in relation to others, in the past and the present. They reached out for historical narratives that might tell about the past, facilitate its interpretation and provide an understanding of the way it had shaped the present. They were motivated by an awareness that people laid claim to power, resources and identities through their stories about the past; and that silencing people, and annihilating their ability to tell stories, put an end to the claims that they might make. Cathcart’s decree was an act of epistemic violence; it ruptured their lives, scrambled the way they perceived themselves and proscribed the stories that they might tell in the making of their own history. While the amaTshatshu were the only group west of the Tsomo and north-west of the Great Kei to be proscribed in this way, their story needs to be told in relation to other groups and to changing power relations. Repeatedly dispossessed, removed and relocated, they were not removed from society but reinserted in disconcerting and uncomfortable ways alongside others.

At the forefront of power and politics on the north-eastern frontier in the first half of the nineteenth century, their subsequent obscurity in the twentieth century is striking. As a result of their proscription, they were relegated to living on the margins of political and economic life from the mid-nineteenth century. Their struggle for restitution provides a window into the changing character of chiefly authority, power and politics — from colonialism to the present.

This book is concerned with what it means for people to have their name obliterated and with the struggle to regain dignity, identity and a sense of empowerment through its restoration. It also explores broader questions. Ending the proscription of the Tshatshu chieftaincy raises questions for real politics. What are the implications of recognising ethnic naming and hereditary chieftaincies in a young democracy? How did the idea of western Thembuland emerge; to what end was it constructed; who fits into the different versions of this concept and how? More broadly, it raises questions that go to the core of the postcolonial dilemma: What is to be done about chiefs and indigenous institutions distorted by the colonial past? What does it mean to be disfigured by colonialism? Can institutions marked by a cruel past be brought in line with the Constitution and the Bill of Rights, the foundations of South Africa’s democracy? What if they are structurally unreceptive to reform?

Find out more about The House of Tshatshu.

The House of Tshatshu: Power, politics and chiefs north-west of the Great Kei River

A story of conquest, dispossession and un-naming

Where is “fanatical capitalism” taking us?