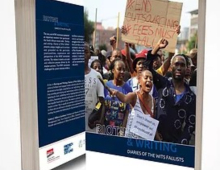 Rioting and writing: Diaries of Wits Fallists, the book about #FeesMustFall written, managed and led by student activists, is now available for free download. This is the forward to the book, written by Professor Nelson Maldonado-Torres from Rutgers University, USA.

Fallism will pass to history as a major earthquake that moved the foundations of South African consciousness and society, but also as a project that brought back the idea of decolonisation as an incomplete project in full force to South Africa. In this, Fallism is not alone, as decolonisation movements and projects have been growing world-wide. But Fallism has unique contributions that this book helps to identify and make clear.

This book is an extremely valuable and much needed contribution to the emerging literature about Fallism. One of its main virtues is that it is not simply a book about Fallism or about decolonisation written by academics who have remained largely marginal to the movement.

Rather, this is a book written by a great majority of student-activists themselves who, as a collective, considered the significance of decolonisation in multiple areas, including in the task of writing itself.

Rioting and Writing: Diaries of the Wits Fallists sheds light on the high degree of complexity and richness in a movement that seeks to transform the bases of South African society by identifying the multiple ways in which apartheid continues in the country. Instead of aiming to represent the entirety of the movement, this book helps to advance the goal of making possible and available more expressions and analyses by student activists themselves from Wits and other universities.

The text shows the high degree to which thinking and action often come together in social and epistemic movements like Fallism, leading to a better appreciation of the multi-layered dimension of this and similar movements. This text is an essential reading for anyone interested in Fees Must Fall, in the transformation and decolonisation of the university, and in decolonial movements today.

The book was developed through a collective and creative process driven by protagonists of the struggle, and consists of stories from different perspectives, addressing a variety of issues, and presenting critical personal accounts. It provides a unique perspective on a movement which challenged the power relations with in a neoliberal University in a post-colonial context. Jointly published with SWOP, it is a must read!