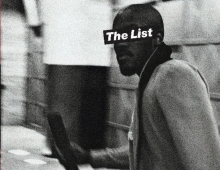 With his latest book, The List, journalist and author, Barry Gilder has taken the first step towards possibly becoming South Africa’s John Le Carre. Britain’s Le Carre is known for his fascinating stories of espionage and counter espionage against the backdrop of British governance.

What Gilder has done with The List is to take the reader into contemporary South African governance providing insights into what could be going on behind the scenes in the murky spaces of national and international politics. Not only does he do this, he also provides scenes that take us back to pre 1994 showing some of the spy activity that had taken sides on both sides of the conflict.

He may continue to claim that The List is fictional but it is without doubt based on similar moments that he himself or others have lived through.

There are a number of other non-fiction books relating to the underground struggle that confirm several threads that run through this story.

For the reader interested in making comparisons, it would be useful to read Shades of Difference by Padraig O’ Malley, Reflection of an ANC Cadre by Charles Nqakula, Askaris by Sipho Dlamini and The Honour to Serve by James Ngulu.

The List is a page-turner. It is also educative in that it introduces the reader to the heady world of politics and governance demonstrating that nothing often is as it seems. It tells a story that gives credence to some of the facts that have emerged about the framing of Winnie Mandela. Finding ways to influence and often distort events leading to loss of life forms part of the experiences of some of the characters.

Recently, there have many credible books written by authors who participated in the `underground’ struggle, but this `novel’ has a special place of honour.

It is also a must read for those who suspect that there remains groups of apartheid sympathizers who continue to operate clandestinely to disrupt democratic South Africa.

It is time that South Africans become familiar with state machinations so that they can better assess political developments as they unfold. Gilder is best placed to describe accurately some of what goes on behind the scenes and succeeds in telling a racy story.

This `novel’ has a special place of honour

Ndinethemba: My Hope. My Strength. My Progress, written by Eyethu Mfazwe from the Eastern Cape, is the story of the black female experience, told through beautifully crafted poetry. Women of colour have predominantly been omitted from many historical accounts and swept from the books of history. It is for this reason that we should encourage […]