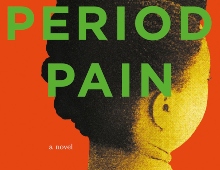 In 2007, South African writer Kopano Matlwa burst onto the literary scene with the publication of her debut novel Coconut, which went on to win the European Union Literary Award. Spilt Milk was her second novel, which won the Wole Soyinka Prize for Literature in 2010. Our books editor, Kay-Dee Mashile, reviews Matlwa’s latest novel, Period Pain, which was recently shortlisted for the Sunday Times Barry Ronge Fiction Prize.

In Period Pain, Kopano Matlwa begs all South Africans to ask where we are going and what we have become. Matlwa captures the heartache and confusion of many South Africans who feel defeated by crime, violence and the social ills that affect us directly and indirectly on a daily basis. Matlwa introduces us to the character Masechaba, whose story allows us to reflect on and rediscover our humanity in an attempt to move South Africa forward today.

Period Pain is a novel about Masechaba, who we meet as a teenager who has just gotten her first period. Matlwa takes us through Masechaba’s story in a way that makes it seem like you are having a deep conversation with your newly found best-friend over WhatsApp into the early morning hours. At the very beginning, she draws vivid images of Masechaba’s struggle with “the issue of blood” that the reader can almost feel the embarrassment she felt, especially when she stains the seat of her brother’s new car.

One can easily empathise with Masechaba, even without being able to relate to her pain and it is so easy to find yourself drawn into her story. The book addresses a number of themes including how xenophobia exists within households and institutions even today.

Matlwa looks at how South Africans discriminate against foreign nationals and how South Africans are largely seen on the continent: as mentally enslaved and spoiled, when, in essence, all Africans should treat one another as equals. It is during a fight against horrific xenophobic attacks that Masechaba is “correctively” gang raped and pushed to breaking point. Matlwa, once again gives us the privilege of walking in Masechaba’s shoes, seeing her life through her own eyes.

The book also delves into mental health challenges, not only from the point of view of those seeking help, but also the professions who strive to fully assist their patients. At one point, Masechaba wishes that the more critical patients would die so that she could better serve and help those who still have a chance at life. This is only one example of the realness depicted in this novel. I actually often had to wonder if Masechaba wasn’t Kopano’s middle name and if she didn’t accidentally allow me to read her journal.

Reading the book also made me reflect on many experiences when I witnessed subtle xenophobia and kept quiet, or times when I stood up for or against something and those closest advised to rather leave things be. As a woman and an activist, the book really felt personal. It brought humanity back to heroes, it reminded me of all the horrific stories my activist friends would share, heart-breaking experiences of being raped, assaulted or both, often remaining silent.

Period Pain is a great book. It reads quite like a diary entry rather than a novel. This, at least for me, made it read like somewhat of an introduction throughout. I am still deciding how I feel about that, it made me read through it quite fast- constantly waiting for it to actually “start”. I hope there will be a sequel!

Kopano Matlwa gets South Africans to ask the important questions

The biography of Onkgopotse Abram Tiro

“Azania! Hear the cries of your children”