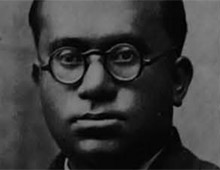 The first black journalist to work on a daily and to be a correspondent for well-known papers in India, Dhanee Bramdaw, was born on October 5, 1901 in Pietermaritzburg, Natal, to Dabee and Poola Bramdaw. His parents ensured that he got good education at the time when there were less opportunities for Indian people in South Africa.

During his time at Fort Hare University in Alice, Dhanee Bramdaw discovered his love for words and usage of language as a form of resistance. He edited the college magazine, South African Native College (SANC). At 25, in 1926, Bramdaw was taken under the wings of Debi Judgeon (circulation manager) as a librarian in the editorial library of one of the biggest newspapers in Natal, The Natal Witness.

While working as a librarian, who was tasked with sorting and filing news clippings, he further contributed articles to the Indian World, a division of The Natal Witness. He developed himself as a journalist through contributing daily columns in the Indian World until he was appointed editor, thus becoming the first Indian in the country to be part of the editorial staff of a daily newspaper.

Since then, he continued to reach greater heights. He was a South African correspondent to Indian newspapers such as Hindu Madras, Madras Mail, Lucknow, and The Pioneer. Numerous daily newspapers including The Sunday Times, The Daily News (formerly known as The Natal Advertiser), The Rand Daily Mail and The Natal Mercury also enjoyed his writing prowess as well as the UK-based international news agency, Reuters. In 1934, he became an acting editor-in-chief of Africopa News Agency in Cape Town.

Bramdaw penned several books including the one he co-edited Sastri Speaks. This book comprises a collection of speeches and writings of the Agent-General of the Government of India, Srinivasa Sastri during his stay in the country. Sastri visited South Africa for about two years between 1927 and 1929. His arrival in South Africa was because of the sitting he had to be part of in the Round Table Conference between the Government of India and the Union of South Africa’s government in December 1926. Because of his great admiration of Sastri, he edited the book to pay homage to him.

In 1935, with the help of The Natal Witness staff, he penned the second book titled, Out of the Stable. The book is about the concise history of Indian people in South Africa from 1910 to 1935.

A year later, Bramdaw wrote a Mweli-Skota equivalent (Skota was considered a human encyclopedia of African intellectuals), called the first South African Indian Who’s Who and Commercial Directory. He would produce two editions before the Second World War, however would not be able to complete the third edition due to to his ailing health.

Limited newsprint and space for Indian news in a white newspaper (due to the effects of the Second World War) and the growing literacy rate in the Indian population in South Africa created a vacuum Bramdaw would later fill.

The itinerant Bramdaw started his own newspaper on Saturday November 30 1940 – The Leader. The Leader’s uniqueness comes from the fact that it did not target a specific readership group – unlike Indian Opinion and Indian Views – but the entire community. The former printed mostly in Hindi, Gujarati and Tamil and the latter in Gujarati only.

His newspaper won the hearts of many people and was printed in English by the Natal Witness in Pietermaritzburg and published by Central News. It sold for two pennies a copy on the streets of Durban.

Its founding father explained the vision of the paper, “by news it hopes to interpret all those facets of community life and development that should prove of interest to all its readers”, wrote Meer in Reminiscences in the Struggle for Liberation and the Role of Indian South Africans, 1924-1958.

Bramdaw would die on July 4 1952. After his passing, his wife Saraswatie Bramdaw ran the newspaper making it one of the few family-run newspapers in South Africa.