‘Where were they when the auditorium was burning?’ 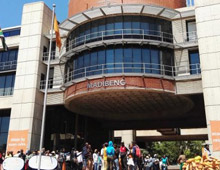 [intro]At the University of Johannesburg (UJ), private security guards are stationed outside the institution’s library and search students who enter the site. The decision to hire private security was presumably implemented at UJ following protests last year, which turned violent when demonstrators threw petrol bombs at the main campus library. Just last week, however, the university saw a group of arsonists attempt to burn down the main auditorium with a petrol bomb. The Deputy Vice Chancellor, Mpho Letlape stated that the perpetrators will be ‘identified and handed over to the police.’ However, students continue to feel uneasy about being searched.[/intro]

Like many in the academic community, who have debated whether private security is necessary on university campuses, UJ students have expressed concern about being searched on campus, despite the arson attack that made headlines last week. Phathu Neswiswi, a BCom Honours student, said that the issue of security is two sided.

“I do understand that this is being done to ensure that we are all safe. But there is a lot of miscommunications. I think the university can find other ways to protect us,” he said.

Brenda Linda, an education postgraduate student at UJ said the use of private security was understandable, especially considering the protests.

“Students are not happy. Following protests last year, they are still demanding change and if their voices keep being oppressed and the university does not address student demands, [these] acts are still going to take place,” said Linda, adding that she does not want to be searched by private security.

“I have been requested to open my bag to be searched. I feel like when someone looks into my handbag, they are invading my privacy. Like a cell phone, bags are private”, she said.

Mandy Sayenda, a student at the Department of Anthropology, expressed her discomfort when it comes to being searched.

“I avoid going to the library. If needs be, I access the library without anything on me just so that I won’t be searched. I think there are a lot of issues revolving around this matter, but I feel like my privacy is being invaded and I feel as though I am treated as a criminal,” she said.

Nicholas Hattingh, an engineering student, had a different view. He said that the institution was exposed to dangerous acts from protestors.

“I think it is necessary for security to search on university premises. It is for the better that they do so,” he said.

Recently, the university attained a court interdict ‘to ensure the safety and security of all its stakeholders and property in the wake of recent acts of arson and wanton behaviour on its campuses.’

“Irrespective of anyone’s ideological or political orientation, students’ rights to actively initiate, organise and participate in lawful activities of any academic, political, religious and social student organisations are promoted and shall be protected at the University,” said Tumi Mketi, Senior Executive Director in the Office of the Vice-Chancellor, who insisted that the arson attack had necessitated the move by the university to approach the courts to obtain an interdict.

Takalani Mutshari, an interim member of the Student Representative Council (SRC) raised a concern about the hiring of private security, mainly the cost. “[Private security] is no longer wanted because a lot of money is being spent on paying them. It is a waste of money. The money could be used for far more important things like renovating student residences and helping those who cannot afford with their tuition,” he said.

Despite students voicing their concerns, private security continues to be a presence on campus. Earlier this month a group of workers staged a protest demanding that the university dismiss the private security it had employed.

One of the workers, who wished to remain anonymous, said that the hiring of private security was doing more harm than good and guards have been known to assault female demonstrators. “There are many inappropriate things that security do on campus. We do not want these bouncers here anymore,” she said.

Another worker, who wished to remain anonymous said that there were allegations that guards recently assaulted a female colleague.

A document that outlines the university’s security policy, signed by the Vice Chancellor and Principal, Professor Ihron Rensburg, was circulated around campus and states that the university is “committed to safety excellence and will conduct business with care in order to ensure as far as reasonably possible an environment that is safe and without risk.”

“The university will meet all statutory requirements as determined by the Occupational Health and Safety Act, and other relevant legislation; conduct training, awareness and induction programmes; to provide guidelines to address safety with the view to minimise risk and to implement and maintain effective emergency procedures,” the document says.

Concerns from students, however, remain. Hape Moloi, a strategic communications student said private security is ‘not the way to go’.

Inno Lidiga, pursuing Social Impact Assessment said that she supports private security on campus. “They bring order on campus and I do not mind being searched. This happens at other universities like Wits and University of Limpopo where I have been before. It really does not matter to me”. However she questioned where they were during the arson attack.

“Where were the bouncers when the university’s property was burning? They are seen everywhere on campus, sitting in their black uniform, but on that day, where were they? I find them useless and think that they deserve to be fired”, said Lidiga.

Mosimane Walaza, a business management student offered her opinion. “I think we need to begin where this whole thing began. So much happened during last year’s protests and the need for safety then became a priority. If we understand that, we are likely to be less critical about the need for private security on campus,” she said.

“[I]t remains possible for students to participate in public protests, demonstrations and meetings as long as they do so in terms of the University’s student regulations. 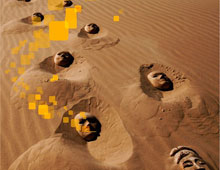 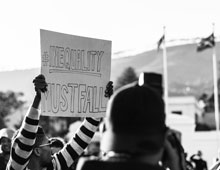 Lessons of Fees Must Fall 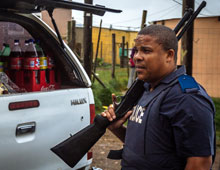 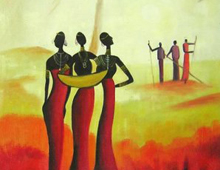