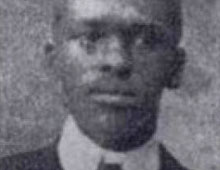 Jeremiah Dunjwa was described by his fellow writers as a man with many talents. During his lifetime he left a mark as a leader, writer and teacher of African people. He plied his trade as a court interpreter, teacher, politician and a newspaper editor. It was T.D. Mweli Skota who described him as a ‘distinguished writer and historian’.

Jeremiah Dunjwa was born towards the end of the 19th century in Beaufort West, and later in his life he became a Wesleyan. He completed his education in Healdtown Institution, a Methodist church boarding school based in Fort Beaufort, in the Eastern Cape. It was in Healdtown that he rubbed shoulders with the doyen of isiXhosa newspapers, John Tengo Jabavu. This encounter encouraged him to pursue a career as a newspaperman when he moved to the Transvaal.

He first worked as an interpreter in the Supreme Court in the Cape but in 1904 he moved to Johannesburg. Four years later, in 1908, he taught at Pimville Primary School in Soweto, a school administered by the government of the day. It was the only school the government provided for Africans in the Transvaal.

While teaching in Pimville he interacted with Levi Thomas Mvabaza who was also a resident of Klipspruit and started to edit and write for Umlomo wa Bantu-Molomo oa Batho(Mouthpiece of the People). The newspaper, a weekly English/isiXhosa/Sesotho publication, was formed in 1910 by Mvabaza and Saul Msane in Johannesburg. Mvabaza edited isiXhosa columns while L.N. Ramosime edited the Sesotho section. And by 1916 they were based at 10 Kruis Street, Johannesburg.

In 1913, a year after it was formed, he joined Abantu-Batho as the isiXhosa editor. By September 1916 the merger of Umlomo wa Bantu-Molomo oa Batho (Mouthpiece of the People) with Abantu-Batho materialised for ideological similarities. Umlomo aimed at ‘… unifying all African tribes into one people, and further to improve and expedite the education of the African children,’ says Limb.

While he was an editor he went undercover and visited mines to experience the conditions black miners underground found themselves in. The writing he produced inspired him to be a bit more pragmatic thus his political activism had a big place in his heart.

As a politician he participated in civil matters by mobilising African people and advocated for their rights by becoming their voice when he acted against the Natives’ Land Act. During the 1924 Bloemfontein elections of the ANC where Z.R. Mahabane succeeded Sefako Makgatho as President General, he was announced as the General Secretary of the congress.

In 1919, he acted as Secretary of the Transvaal Native Congress (TNC) in the place of Thema who was in Britain at that time. In his 1921 Industrial Commercial Union (ICU) conference speech, he responded to Umtetheli, which had reported that Africans are the cause of the problems that occurred around the labour recruitment issues.

Dunjwa, then a Pimville resident and prominent figure, was part of the affairs affecting the area. Pimville township was formed in 1904 as Klipspruit and by 1934 the name was changed to Pimville in honour of the Deputy Mayor of Johannesburg James Howard Pim. Around the early days of Pimville, its residents commuted by train and could not reach Pimville from Johannesburg by train as the railway went as far as Nancefield.

Dunjwa and other community leaders of Pimville successfully persuaded the government to extend the railway from Nancefield to Pimville terminus. It is no doubt that the Pimville Advisory Board was graced with his wisdom and leadership. He was a father of six, two daughters and four sons, in his marriage to Emily Kayane.

Unfortunately he died a year after Klipspruit was changed to Pimville in 1935, a township that became his home throughout his career and a place of his final rest.