Learning from the Past : The October 19th Message

For the month of October The Journalist has focused on the status of journalism in South Africa. Our original thought leader and responses from prominent professionals provided the spark for a nationwide debate that culminated this past week in the commemoration of October 19th.

On 19 of October 1977, the National Party government banned The World and Weekend World newspapers as well as nineteen black consciousness organisations. They also banned and detained scores of journalists, including Editor Percy Qoboza. This followed a cabinet decision taken to issue a proclamation under the Internal Security Act that authorised these acts of repression.

The clampdown came just over a month after the death in detention of Steve Biko, leader of the Black Consciousness (BC) movement. The apartheid state, fuelled by a fear of the awakening that BC and Soweto 1976 signaled, moved into its darkest era.

Biko and Peter Jones were arrested on 18 August 1977 in a police road block under the Terrorism Act No 83 of 1967. They were interrogated at Port Elizabeth’s Sanlam Centre by the notorious security policemen Gideon Nieuwoudt and Harold Snyman. The building stands as benign now as it must have appeared then. Like so many other state headquarters – John Vorster Square in Joburg, Caledon Square in Cape Town and Vlakplaas – the name alone became a synonym for terror.

Biko was tortured in detention and died after being transported naked and manacled for more than a thousand kilometers in the back of a police van, only covered by a thin blanket.

To practice our Craft with integrity and make sense of the present we have to know our history.

After the 1994 democratic elections, October 19th was declared South African National Media Freedom Day. And this year South Africans – those in the media and outside – took part in a series of activities to observe this day.

The Journalist kicked off with a debate on journalism after 20 years of democracy. Zubeida Jaffer, Kaizer Nyantsumba, Antjie Krog, Jimi Matthews and Canadian media trainer Tim Knight all shared their reflections and. An interesting array of comments has followed this debate on The Journalist’s News pages.

A turning point in history

“It was a day when the state admitted it was powerless […] we found ways of really telling the story.” He added that he has called for the day to be institutionalised.

Recently the second State of the Newsroom 2014 report by Wits Journalism has been released. The report called Disruptions Accelerated, tracks changes in newsrooms across the country. This year’s edition is divided into the following chapters:

Right to Know, Right to Communicate

On Saturday 18 October The Right to Know Campaign marked a National Day of Action for Media Freedom, Diversity and the Right to Communicate in Durban, Cape Town and Johannesburg.

This coalition of civil society organisations including trade union federation Cosatu and SANEF marched to the offices of the major newspapers in the country to deliver a memorandum of demands calling for the right to communicate as enshrined in Section 16 of the Bill of Rights to be respected and enforced.

An online report about the protest states:

“South Africa is still a land of immense poverty and suffering with little pockets of great wealth. When it comes to receiving information we see that the richest 16% of South Africans have a  wide choice of media and the freedom which fast internet gives them, while the majority of South Africans (65%) have little media access, relying on one under-resourced community radio or newspaper, one or two SABC radio stations and eTV and SABC TV.”

Access to quality information remains a burning issue in a society with such huge disparities between rich and poor. 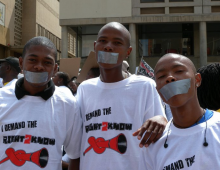 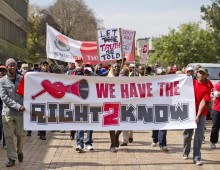 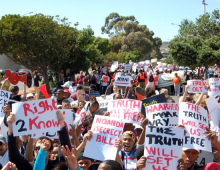 Are the media helping us find our voices?

On Monday October 20th SAfm’s Forum@Eight hosted a debate on 20 years of democracy. The focus was whether the South African media was helping us to find our own voices.

The show was hosted by Sakina Kamwenda with guests Filmmaker and Editor of The Journalist Sylvia Vollenhoven, Executive Director of SANEF Mathatha Tsedu and Editorial Trainer and Author Pippa Green.

The discussion triggered a buzz and flurry of comments on social media and a variety of calls from listeners. Among the issues discussed was self-censorship by the media houses including the SABC, as well as pressure from political and commercial interests.

Vollenhoven recalled how she bunked her official classes at the Argus Cadet School and was taken under the wing of The World journalists where she met Percy Qoboza and the leading black professionals of the day. She said that these kind of encounters meant a lot to her:

“That influence of spending time at publications such as The World, stood me in great stead for the rest of my career.”

She said that “the influence of our elders, of mentors and the people who have gone before” was vital. This kind of experience could not be gained only in classroom and academic situations.

A podcast of this discussion is available. Beyond the podcast and these cyber-pages, the conversation about whether the media is helping us find our voices continues.

I do a lot of training and I have had to keep pace with what is happening in IT. My stint at the SABC where I spent quite some time also helped me to come to terms with the technological tools that assist me professionally. Too many people of my generation and even younger are completely unaware of the wonders of the digital world and what it offers and also how seriously it impacts on journalism and what we do as journalists. The Journalist which I edit is done in collaboration with the University of the Free State and it was interesting to see that in so many cases the young journalists – the students themselves – are way ahead of their lecturers and their trainers when it comes to IT. If we are not keeping pace we can’t understand how the digital age is really influencing our profession and we can’t react to meet its demands.’ Sylvia Vollenhoven

It’s not only technology it’s also the economic margins that’s been a very negative influence on reporting in the last 20 years. According to the State of the Newsroom report produced by Wits Journalism School nearly 600 print journalists have been retrenched. I’ve been in newsrooms recently where reporters do seven or eight stories a day and most of these they do by phone. I think what we have to distinguish is the importance of new platforms with the importance of content. And my concern is that a lot of media organisations aren’t getting to stories in communities and we aren’t getting to read public documents well enough so that we can tell stories about the economy or stories about social change, or stories about social problems, and we’re quite reactive. So in spite of the new technology there are fewer reporters today doing more stories and not actually getting out into ordinary communities where we can tell a story of South Africa, particularly rural communities. Pippa Green

The role hasn’t changed. It remains the responsibility of the media to inform, to educate, and to entertain. I hold the view that the South African media is meeting the demand that the South African nation makes of it. Sometimes people like me who wear a grey beard and are dinosaurs tend to romanticise our own time when we didn’t have the kind of beard that I have now and say that was very good. We live in a different time, the journalism that was demanded of us by South Africa at that time was very different from that which is demanded of the media today. And as such it becomes difficult to make comparisons between the past and the present. As you were saying the manner in which people consume news today is completely different. There is a growing trend towards digital so a lot of people have smartphones and they are reading their stuff there and they listen to the radio on the phone and not when they get home or in their cars. So the manner in which those stories are written has to take cognizance of the time demand that consumers have on what you are trying to say to them. And my view is that any South African who wants to know something is able to find that information in one medium or another in this country. Mathatha Tsedu