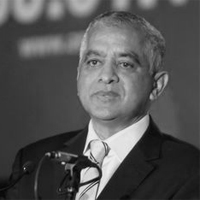 Patron of The Journalist Moegsien Williams is a consummate newspaperman. Starting as a cadet at the Cape Argus in 1977, he has risen through the ranks to the position of editor of The Cape Times, the Pretoria News, The Star, the Saturday Star and the New Age. He is presently editor-in-chief of the 24-hour TV channel, ANN7.

He had the privilege of working as night editor at the Sowetan and then Managing Editor under the illustrious editorship of Aggrey Klaaste. He has been consistently committed to building organisations within the profession. He was a founder member of the Media Workers Association of South Africa (MWASA) as well as the community newspaper, Grassroots.

Like many journalists working in the eighties, he spent a lengthy spell in solitary confinement in 1985. When the country became a democracy in 1994, he was elected to the board of the Vienna-based International Press Institute (IPI) and in 1996 was a founder member and second chairperson of the SA National Editors Forum (SANEF). In 1998 he was elected as chairperson of the IPI, representing more than 1,300 editors and publishers worldwide.