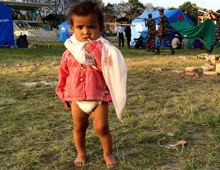 This week a fresh round of tremors ripped through the foothills of the Himalayas. Delhi-based photojournalist Showkat Shafi has been covering the devastation wrought by the earthquake in Nepal just the other day. In a Google hangout with the Daily Vox managing editor, Faranaaz Parker, Shafi details the struggles the Nepalese people face, his interactions with affected people in Kathmandu, and why photography is so important in disaster situations.

I’ve been to Nepal before, and I like that place. It was very hard to get there after the earthquake. Nepal has just one small international airport and, normally, they get very little flights every day. After the earthquake, many countries came to help, flying from their countries to Nepal. I tried for two or three days to get into Nepal by air and it was very hard, because there was so much air traffic and the flights were very chaotic. But finally I landed.

I couldn’t imagine why the roads were empty, but I eventually reached a relief camp on an army ground in Kathmandu. I met the colonel who was in charge of the camp and I asked him:

“Where are the people?”

He said once the earthquake hit Nepal, there were more than 15 000 people on that single ground and there were rumours that any communicable disease could break out in Kathmandu. So the people escaped to the villages.

The camps were like any other refugee camps you see in other countries. There are small tents and there are too many people in one tent. There’s a shortage of water, shortage of food, shortage of almost everything.

All the history, all the heritage and all the old buildings are gone. We will not be able to see them in the future. There were certain people who were not affected by the earthquake and they are helping others now. The new buildings are okay, there are no problems with them, but right now, the situation is that the man who has lost his house has nothing: he has lost everything and many others have lost their lives. 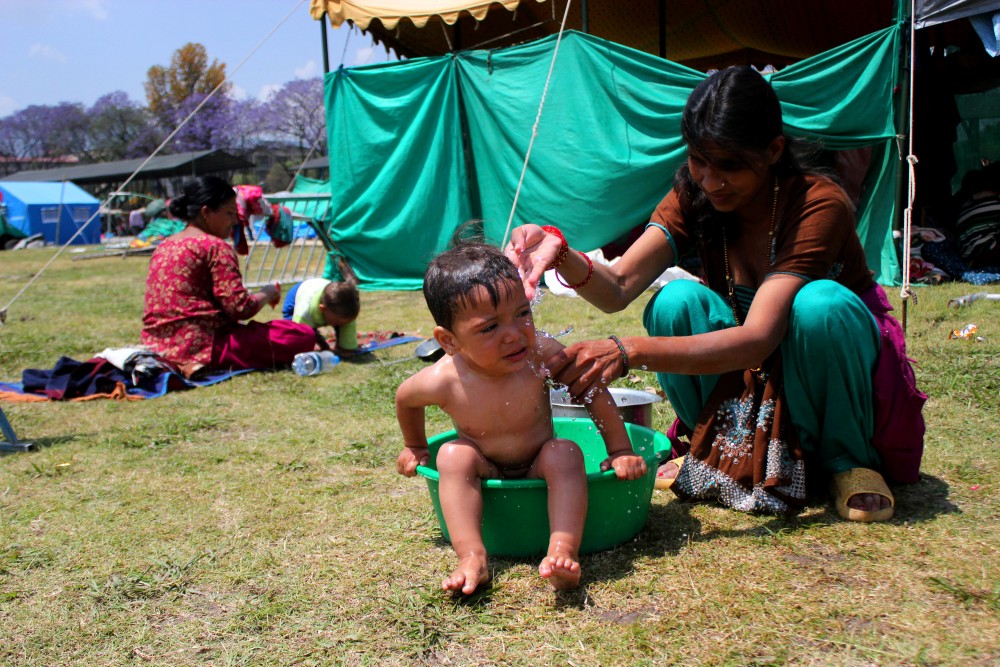 A mother bathes her baby at a Nepal relief camp.

I remember meeting a 96-year-old man standing outside his house. The house looked fine from the outside.

“Yes, I look fine from outside, but I’m destroyed inside. My heart is no more working,” he said.
“The same has happened to my house. The outer walls are intact, but inside my house is destroyed.”

He took me inside the house, but we couldn’t really go inside because all the walls had fallen. It was really heartbreaking.

The situation is difficult for the Nepalese people, and getting aid isn’t easy. Every year more than 10 000 girls are trafficked from Nepal and they are sent to different brothels around the world. The chances of that happening has increased because the traffickers can act as aid-workers and try to get more girls. People have a sinking heart. They are afraid of big NGOs as well, because they don’t know who to trust. At the same time, there is no food, so they have no choice.

When I first decided to go to Nepal, I wanted to volunteer for NGOs who were helping people, but then I found that there were many people helping out, so I thought it’s better for me to do my actual job so that more and more aid can come to Nepal.

I’m in a situation where I’m alone in an area and a guy needs help, I will definitely help. But if there are other people who are helping that guy, I’ll prefer to take pictures, because I’m a photojournalist, and my work is to report. I would like to take the pictures so that the world will know what is actually happening.

Respecting the privacy and dignity of people depends on the journalist. It varies from person to person, depending on the consciousness of the journalist, how he takes pictures, and how he speaks to people who are living in those tents.

I’ve been back in Delhi for the last two days, but I feel like my heart is there in Nepal. It’s hard to go back to normal life.

As told to Faranaaz Parker. All Images By Showkat Shafi courtesy of the Daily Vox.