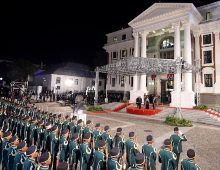 Our political economic challenges, driven by those people who may have benefitted most from the Zuma years, could be the undoing of the Ramaphosa presidency and place the Sixth Administration on a different trajectory than the one outlined in last week’s SONA.

South Africa is a few weeks into the Sixth Administration of the democratic era – and there is a palpable sense of anxiety in the air. Measured by sentiments across the media, in public and in private conversations, in the corridors of political and corporate power, and in the offices of social movements, cautious optimism trades places with deep senses of despondency, exasperation and pessimism. This is the cumulative effect of a type of nuclear shadow that the Zuma years have left on South Africa. For better or for worse, Cyril Ramaphosa is expected to pull the country out of this shadow.

After Zuma’s election as leader of the ANC in December 2007, the growth and macro-economic stability that was achieved in the preceding decade, was squandered. The National Treasury and South African Reserve Bank did what they were supposed to; they secured growth, macro-economic and financial stability. Under the steady hands of Trevor Manuel and the management of Pravin Gordhan, South African Revenue Service became one of the most respected tax collecting agencies in the world. With that achieved, it was now up to other departments and agencies of government to do their part, and distribute the gains of growth. They failed – miserably. It has become clear, over the past several weeks of the Judicial Commission of Inquiry into Allegations of State Capture, Corruption and Fraud in the Public Sector including Organs of State that whatever gains were made until the rise of Zuma, ended up in the wrong pockets and bank accounts. One sign that Ramaphosa was pulling the country in the right direction would be the actual prosecutions of people implicated in corruption during the Zuma Years.

And so, in the midst of this gloom and doom, what can South Africans expect over the coming five to 10 years? The short answer is: Not much. At least not until the country steps out of the nuclear shadow of the Zuma years. The political, administrative, political economic and legal processes may drag on for a while, and there are signs that a pro-Zuma faction has started a serious fightback. There is, also, every possibility of a tactical merger of forces among disaffected groups that include Ace Magashule’s pro-Zuma faction in the ANC, the Economic Freedom Fighters (EFF), Irvin Jim’s National Union of Metalworkers of South Africa (Numsa) and smatterings of small formations with little or no political significance. Let us reflect, briefly, on the toxic legacy of Jacob Zuma.

Most people who follow current affairs may know, by now, that there was a rise in prebendialism, nepotism and cronyism during the Zuma years, when the state became a vital source of money, power and privilege. This has been covered in the media extensively, at least since the release of the Gupta files. What has become clearer, through testimonies to the Zondo Commission, is that the Zuma years left a very deep shadow on the country. Moving out of this shadow could make or break the Ramaphosa presidency, and whatever hopes and expectations South Africans may have for the long term future of the country.

The threats to the Presidency, and to the Sixth Administration, are ideological and political. They come from within, in the sense that Ramaphosa has to deal with revolting factions within the ruling alliance (the ANC, SACP and Cosatu), while keeping the official opposition (Democratic Alliance), and the populist far left EFF and Numsa away from the control panels of the economy. While DA members seem to be fighting among themselves, at the moment the threat from them can be mitigated. It is from “the left” – mostly from the ANC’s friends and allies – where Ramaphosa’s main challenges may come. To them Ramaphosa represents a threat to the sources of money, power and privilege that had been acquired during the Zuma years. All together these sources of money, power and privilege, mass scale looting, corruption and maladministration (the near complete absence of service delivery across the country, and under-development of places like the Eastern Cape), state, institutional and cognitive capture across the political economy make up the contours of the nuclear shadow left by the Zuma years. It is all of these that Ramaphosa has singled out for reversal, and the restoration of faith in the government.

Rejection of the National Development Plan

In last week’s State of the Nation Address, Ramaphosa pledged a return to the National Development Plan (NDP), and especially its emphasis on establishing credible institutions with capable people to focus on the state’s developmental objectives. This focus on the NDP and on a professional and capable state, has caused considerable angst among members of the ruling alliance, and among rueful public intellectuals, smarting over their loss of power and influence in establishing a good old fashioned Marxist-Leninist dictatorship of the proletariat.

The electorate may have rejected the Socialist Workers Revolutionary Party (the party received 0.14% of the vote in last May’s election), but its founder, Irvin Jim and the National Union of Metalworkers of South Africa (Numsa), remain a potentially destabilising force.

Along with other trade unions and small groups of influential public intellectuals and academics, any political economic restructuring may strengthen the fightback and undermine reform of the public sector. As it goes, Numsa’s ideological sympathies are near perfectly congruent with those of the EFF: they share Marxist-Leninist beliefs, pockets of increasingly influential intellectuals in academia and arriviste think tanks populated by comrades from the ruling alliance, who now present themselves as honest brokers. One of the things that brings together this, seemingly disparate group, is their ideological opposition to the NDP which is conveniently dismissed as a neo-liberal or “a DA” plan.

While the NDP was accepted by Parliament in August 2012, it was ideological dogmatic. Cosatu, Numsa and other die-hard communists stalled successive progressive iterations of the Plan. The other brake on the NDP was a public service which owed fealty to the ruling alliance, that were emboldened during the Zuma years and became either unwilling or incapable of carrying through whatever early gains could be had from the Plan. It does not help that for the better part of two years government has been in somewhat of a limbo because of uncertainty in and around the Presidency, while state institutions and agencies (SABC, SAA, Eskom, SARS and Prasa, among other) have been coming apart. Reshaping the public service is one of Ramaphosa’s stated objectives, and to the extent that it includes shedding staff it is fair to say that Cosatu, will be joined in ideological embrace by other Marxist-Leninists, like the EFF and Numsa to oppose the shedding of public sector jobs.

While Ramaphosa has to fight his friends and allies the economy is nowhere close to producing the kind of growth required to distribute any gains more equitably across society in order to address the worst damages, and to ease the social tensions caused by inequality, poverty, unemployment and maladministration. Two immediate issues that are rising in confrontation of Ramaphosa’s attempts to rescue the economy are land reform and attempts to nationalise the South African Reserve Bank, with a contiguous attempt to abandon the policy of keeping inflation pegged low (inflation targeting), and encourage printing money (quantitative easing). A key point, here, is that the same internal characters who oppose Ramaphosa are the main proponents of quantitative easing, of nationalising the SARB and unshackling inflation – and who promote expropriation of land without compensation.

Already Ace Magashule, the ANC’s secretary general – the person who has been identified as the biggest threat to Ramaphosa – has won a major battle by nominating Zuma loyalists to head parliamentary portfolio committees, notably Bongani Bongo, Faith Muthambi and Supra Mahumapelo. It was reported last week that Magashule’s nomination of “tainted leaders who held senior positions” in the Zuma Government placed the Ramaphosa camp on the back foot.

To sum up, then, we can close the link between “internal” resistance to Ramaphosa and “external” threats especially the economy, which is in a desperate state. These political economic challenges, driven by those people who may have benefitted most from the Zuma years, could be the undoing of the Ramaphosa presidency and place the Sixth Administration on a different trajectory than the one outlined in last week’s SONA.

South Africa does not have another 10 years to add to Zuma’s wasted decade. Ramaphosa needs time, more than what the Sixth Administration may provide. And he needs space, more than what his alliance members and other political forces may give him.