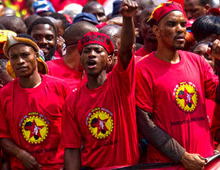 Before the dawn of democracy when South Africans were fighting to make their voices heard, building strong trade unions became top priority. It was a given that these unions were aligned to the liberation movements to fight a common enemy. And so Cosatu was born at the height of apartheid excesses in 1985. But now as the ANC dominance declines, its main alliance partners are coming apart. The seismic spasms in the labour movement and the cracks in the once mighty Congress edifice is the fallout from the battle for the heart and soul of our democracy.

And, the fallout runs like a raging torrent through South African politics; a force of nature that has moved in to fill the vacuum left by the absence of strong leadership. It wasn’t long before it reached the shop floor, with warring factions holding mass meetings to defend their actions and in a bid to win over workers this week.

In the past few days the headlines said it all: Has the giant fallen? asks the Africa Is A Country website. NUMSA expulsion could end in train smash, says analyst Terry Bell. Amandla Magazine writes about Reclaiming Our Unions.

But what does all this really signify? Are we merely experiencing the cut and thrust of political changes in a nascent democracy or is the shambles in the labour movement indicative of something deeper? After almost three decades of being in the vanguard of the fight for workers’ rights, has the Congress of SA Trade Unions (Cosatu) reached a dramatic mid life crisis.

The current crisis has some of its origins in the historic Special National Congress the National Union of Metalworkers of South Africa (NUMSA) held last year this time when it was decided to recruit workers from other Cosatu unions and break all ties with the ANC – of course also splitting with the tripartite alliance of labour, the Communist Party and the ruling party. Eight unions backed the Numsa stand and 10 others supported the Cosatu President. 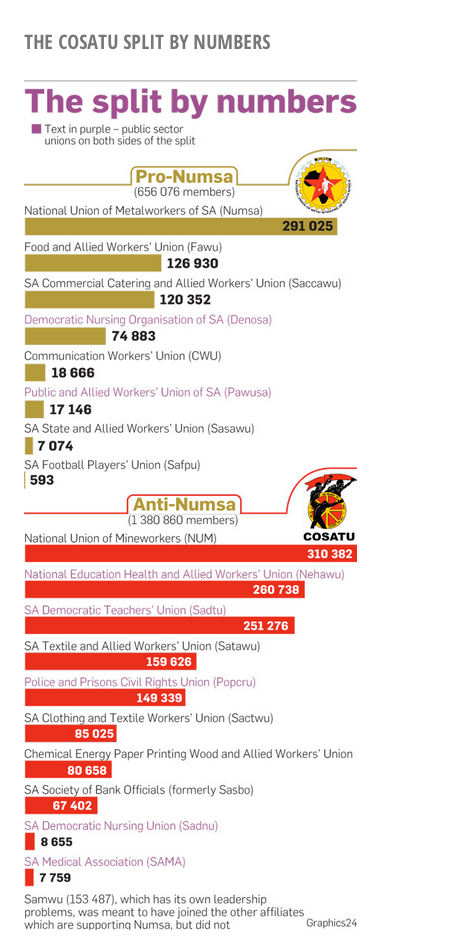 But this is South Africa and so adding to the intensity of the sea changes in the labour movement, are the personal dramas of its leadership. Earlier this year Numsa reiterated its call for a Special Congress to elect new leadership and review Cosatu policies. And that’s when the rumours started that Numsa could be expelled. Cosatu President S’dumo Dlamini said the Special Congress demand did not have wide backing. Ironically he said at the time that it could threaten Cosatu unity.

But just over a week ago that unity was in tatters as Numsa was expelled from Cosatu by a vote of 33 to 24… after wrangling, arguments and discussions that went on until the early hours of the morning. Said Numsa General Secretary, Irvin Jim:

“We remain resolute, that we’re going to fight for the unity of workers because this federation belongs to workers, not individuals. As a worker controlled organisation, we are going to convene a constitutional meeting and mass meeting to develop a programme on how we move forward and how we continue to raise our voices on working class struggles.

Cosatu is both a shield and a spear in the hands of workers.”

Several years ago the leaders of the ‘spear’ roundly criticised former unionist and academic Sakhela Buhlungu for a paper he wrote for the South African Labour Bulletin (SALB) titled Flogging a Dying Horse: Cosatu and the alliance. This week writing for the online publication Africa Is A Country, he says:

“I have observed developments in Cosatu for the last 22 years since I left the employ of one of its affiliates and I am now convinced that what we have before us is not a mere expulsion of an errant affiliate. What we are witnessing is a split of the federation taking place in slow motion. The expulsion of Numsa was merely the spark that ignited an already highly combustible situation that had been building up since Cosatu’s last congress where nifty last minute negotiation averted a toe-to-toe contest for leadership positions. By ignoring calls for a special congress and instead expelling Numsa, Dlamini and his allies succeeded in drawing the battle lines between the two factions and forcing the current split. We now know that seven other affiliates and Cosatu general secretary Zwelinzima Vavi have openly revealed their game plan by supporting Numsa. In addition, significant sections of the unions on Dlamini’s side – Sadtu, NUM, Ceppwawu, Satawu, etc, support Numsa and Vavi.

The decision by the seven unions to boycott Cosatu structures, Vavi’s refusal to sign the Numsa expulsion letter, his public distancing from the CEC decision and his boycott of the press conference called by Dlamini to formally announce the expulsion have served to confirm the split once and for all.

“Recent developments in Cosatu have been nothing short of extraordinary and cataclysmic. It is now commonly accepted that the ‘giant’ whose arrival was so evocatively declared by (now South African Deputy President and then mineworkers’ union official) Cyril Ramaphosa in 1985 is on its knees. On top of that, all of its dirty linen is now on public display for all to see and scrutinise. The so-called expulsion of Numsa was supposed to be a show trial aimed at asserting the authority of leaders allied to what has been until now the hegemonic ANC/SACP political current within the federation. But the significance of these events is much greater than was intended by those who staged the show trial. This has left many in a state of shock and sadness, with analysts and journalists scrambling for ways to explain the implications of the ‘expulsion’ of the federation’s largest and best resourced affiliate.”

Buhlungu says he “took a lot of flak” for the paper he wrote for the SALB as well as for a subsequent book called A Paradox of Victory.

“Some in Cosatu never forgave me for the things I wrote. But union developments over the last two years have been extraordinarily sad and even tragic. This is not the time to spend settling scores or gloating about who was right.”

“It is no exaggeration to say that South Africa is in the midst of the most important political development since 1994. The decision by the majority of the Cosatu executive to expel Numsa started a process that is in danger of becoming a train smash which could seriously damage our fragile democracy. As Cosatu general secretary Zwelinzima Vavi noted in a letter to the Cosatu executive released on Tuesday night, ‘the magnitude of the decision is not only of historical importance but has momentous implications’.”

So what does it mean for ordinary South Africans if the tripartite alliance is in tatters and the biggest trade union federation has expelled its biggest member? An image compiled by Graphics24 adds up the numbers to indicate that in union membership terms the pro Numsa faction is smaller. But the expulsion of Numsa means Cosatu could lose hundreds of thousands of members if the problem isn’t resolved and aggrieved affiliates decide to leave the federation.

In the broader political scenario South Africa has a comparatively weak opposition. The unions fill the gap to keep a powerful ruling party in check. Reading from a joint statement drawn up by the Numsa supporting unions, the Food and Allied Workers Union (FAWU) General Secretary, Katishi Masemola, said:

“Without credible Cosatu leadership, the ANC Government was able to disregard our demands to ban labour brokers, to place a moratorium on e-tolls or the youth subsidy, and many other matters. Our objections to legislation to increase state secrecy, or measures to tackle corruption at all levels, including defending the Office of the Public Protector have been largely unheeded. Addressing the disaster of unemployment and inequality through a radical economic programme has failed to materialise. Instead, we have a neo-liberal NDP [National Development Plan].”

Masemola added later: “There can be no Cosatu with Numsa.”

Under the headline of “Reclaiming Our Unions”, Amandla, a magazine produced by the Alternative Information & Development Centre (AIDC), focuses on the troubles in the SA Municipal Workers Union (Samwu) as indicative of the “continuing fight for democracy”.

“The crisis in Samwu – just the latest of several major corruption scandals in recent years involving some of South Africa’s largest and most influential unions – must also be understood within the broader crisis in Cosatu and the broader political shifts and realignments, with Numsa’s call for a ‘movement for socialism’ occupying the focal point.

Accusations of corruption are relatively widespread throughout South Africa’s union movement and across political alignments. The speed with which one of South Africa’s most respected and most militant unions has reached a point of such serious crisis should point to the need for a far-reaching struggle to entrench workers’ control and democracy in the progressive trade union movement.

In a country where the resources are controlled by a relatively small group and historic imbalance is far from being addressed, these schisms and the accompanying leadership crises are the openings radical forces need to power up a movement away from a slow, moderate pace of transformation. 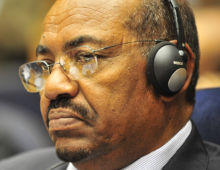 Academics have shaped Sudan’s political history, and may do it again 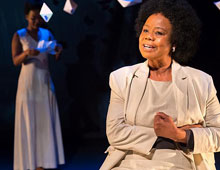 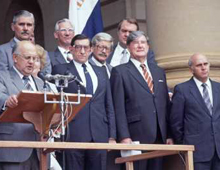 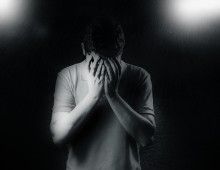