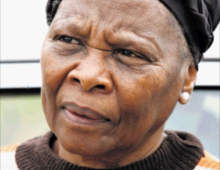 Sophie Tema Mosimane may have been known for having scribed the story that was accompanied by the globally recognised and iconic Sam Nzima’s June 16, 1976 image exposing Apartheid brutality. But her portfolio of work exposing the erstwhile regime’s suppression of black people was impressive, albeit it having fallen through the cracks of history. Tema, worked for The World, Post, Rand Daily Mail, City Press and Business Day among others.

When Sophie Mosimane nee Tema passed away on 26 April, 2015, her exit was hardly registered as a major loss of a great life that contributed to hoisting the might of women journalists’ body of work, that pushed the envelope to agitate for the collapse of apartheid as a system, and the ousting of the National Party’s government.

No half-mast flying country flags flew for a woman who endured the gravest human violations ranging from inhaling teargas, seeing and stepping over dead bodies, carrying near fatal youth to clinics and worst still, being hurled in front of the grueling Cellier Commission on September 1976 to give an account as an eyewitness to the Soweto Uprising. What remains indelible is that her reportage gave gravitas to Nzima’s photograph, it was published in The World in 1976.

While Tema Mosimane would have preferred to become a lawyer, her father’s persuasion was strong as he had suggested that journalists are more credible and ethical. This appealed to the young Tema Mosimane who was sent to an Afrikaans- medium mission boarding school to get an education in the Free State. After her father’s passing in 1962, Tema Mosimane got a job as a switchboard operator at the Afrikaans-owned and managed newspaper for Africans, Elethu Mirror, in Johannesburg.

Elethu Mirror, afforded Tema the space to contribute copy between manning the telephone, and she would write tit bits of humour and gossip columns. At some point while employed at Elethu Mirror, she tagged along with a journalist to a beauty contest. Her colleague drank himself silly, could not scribe an article and instead requesting her to write a story. That was her launch as a journalist.

When her colleague from Elethu Mirror, Humphrey Tyler became editor of The World newspaper, he invited her to work on the women’s pages. However she wanted to work on hard news, this is what led to her covering the 1976 march.

On June 15, 1976 she had been informed by a man who had not identified himself that students would be marching against Afrikaans as a medium of instruction in black schools the next day. She had revealed the Cillié Commission of Inquiry which was tasked with establishing the extent of casualties. During this time she had recalled that one of the student leaders had stopped and addressed the students saying:

“Please brothers and sisters I plead with you, remain cool and calm. A report has just been received to say the police are coming.”

Tema Mosimane had recorded her apprehension as she watched the police arriving: “I had seen at Turfloop on 25th September 1974, how the students were attacked with batons and teargas by the police even before they showed signs of hostility,” she was quoted as saying.

Tema said she witnessed a policeman throw what she thought was a tear gas canister into the crowd. She and photographer Sam Nzima saw unarmed children wearing their school uniforms who had died from police bullets. During the frenzy they saw Mbuyisa Makhubo carrying the dying Hector Pieterson, who was around 13 years old and his sister – Antoinette Sithole running besides them, it was the press car VW Beetle that they had been using, driven by Tema Mosimane herself, that ferried young Pieterson to Phefeni Clinic who was unfortunately certified dead upon arrival. The story and the iconic picture published in The World newspaper would expose the brutality of the apartheid regime to the world.

When The World was banned in 1977 by the then apartheid Minister of Justice Jimmy Kruger, most of her colleagues such as Percy Qoboza and others, were detained. She then moved to the newly formed Post and Weekend Post, and when it too was shut down, she joined The Sowetan in 1980 when it was launched. She was later offered a job with the Rand Daily Mail and was there until it closed its doors. She then moved to Business Day and while there was offered a job at City Press where she stayed until her effective resignation in 1993 to care for her ailing mother. After her mother’s passing she decided never to return to the newsroom. A factor that influenced her decision was that in her experience, women were not promoted and were underpaid. “After nearly 30 years in journalism, I was not promoted to anything more than journalist. I realised this was a waste of time,” she was quoted as saying in the Rhodes Journalism Review.

She would spend the rest of her hours working with maximum security prison inmates through an NGO she initiated called the Learn and Earn Trust, whose aim it was to rehabilitate and help inmates to focus on life skills, handicraft skills and HIV education. Through this programme for which she designed the curriculum, the Leeuwkop Correctional Facility inmates were also trained in home-based care to take care of terminally ill inmates.

Her colleagues honour her

Mourning her at her low key send off, the late Nzima had described her as a fearless journalist dedicated to human rights who had contributed to political change in the country, and that that gesture should forever be remembered.

Just after her passing Veteran journalist Nomavenda Mathiane described Tema Mosimane as frank to the core and took no nonsense from anyone.

“She was a trailblazer for women at a time when we were in the minority in newsrooms,” Mathiane had said to Victor Mecoamere of Sowetan during an interview for Tema Mosimane’s obituary in 2015.

A few years ago, she was honoured with a lifetime achievement award at the Vodacom Journalism Awards.

Tema Mosimane was 78, at the time of her death. She passed on from cardiac stress and was cremated. Tema Mosimane was married to photojournalist Moroe “Moore ” Mosimane, who had also worked for several publications and together they had two children – a daughter and a son.