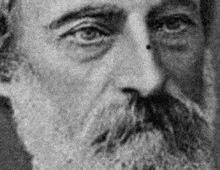 This Scottish missionary and physician came to South Africa in 1861 and was involved in an impressive range of initiatives that included printing and publishing, mentoring young journalists and establishing a medical school.

Reverend Dr James Steward (1831 to 1905) was a missionary, physician, educator and the founder of a hospital in Lovedale.

He was also a writer and publisher, started a medical school and developed the “founding scheme of the South African Native College, now the University of Fort Hare.” (Wikepedia).

He was involved in a range of missionary publishing ventures that brought him into contact with a range of African intellectuals at the time.

Most, including the crème de la crème of early black journalism – Walter Rubusana, Elijah Makiwane and John Tengo Jabavu amongst others – were his protégés who started out working as translators of the bible, writers of indigenous language religious literature and printing assistants. They later were to hold their own as independent publishers.

His scholars were just as multi-faceted as he was. Stewart could not be described by boxing him into one profession. Apart from being a clergyman – a missionary and minister of the Free Church of Scotland (now United Free Church), Stewart was an explorer who interrupted his medical degree studies at Edinburgh University to travel to Central and Southern Africa. When he eventually became a medical doctor, he started a medical institution in Cape Town where he taught indigenous people medicine.

A Scot in South Africa

Stewart did take an arts course while studying at St Andrews between 1852 and 1854, but his main interest was in science. There was no doubt that he would follow the sciences as his interest in Botany yielded two short treaties – ‘A Synopsis of Structural and Physiological Botany, presenting an Outline of the Forms and Functions of Vegetable Life'(n.d.), and ‘Botanical Diagrams’ (1857), both of which were long in use as school and college text-books.

Around the time that his botanical works were published he was also studying Theology from 1855 to 1859 at New College, Edinburgh. After completing his studies he toured through Europe, including Greece and Turkey, later, visiting North America, crossing to the Pacific coast. In 1859 he began the study of medicine at Edinburgh University which was however interrupted by his sudden announcement in 1860 that he it had been his desire to establish a mission in Central Africa.

He reached Cape Town in 1861 and went on to explore the Zambezi, returning to Scotland to complete his medical degree in 1864 at Glasgow University. After he received the degrees of M.B. and CM., with special distinction in surgery, materia medica, and forensic medicine in 1866, he returned to Africa. He reached Lovedale in 1867, near the eastern boundary of Cape Colony, and northeast of Cape Town.

In 1841 Scottish Presbyterian missionaries had founded Lovedale. At the beginning of the 1870s it became the most influential institution – a Christian school and theological seminary that enrolled ‘natives’ solely to train them to become evangelists.

When Reverend Dr Stewart joined Lovedale in 1867 it rose to prominence, due to his efforts. In 1870 when the first principal of Lovedale, William Govan resigned, Stewart was elevated to the helm. His vision was that of an industrialist particularly when he introduced printing and book-binding and enrolled a large number of students from Eastern Cape and all over the country. The school grew from 92 pupils in 1870 to 336 in 1873 and 460 in 1876.
Under his leadership and tutelage Stewart greatly extended Lovedale operations. Though supported financially by the Free Church of Scotland, Lovedale, under Stewart’s rule, became a non-sectarian centre of religious, educational, industrial, and medical activity.

He built technical workshops, initiated a mission farm of 2 000 acres, and founded a mission hospital, the first in South Africa, where ‘native’ nurses and hospital assistants were trained and a medical school begun to operate.

Stewart founded and owned a bilingual newspaper – The Kaffir Express. Six years later, in 1876, the Xhosa pages were published independently as Isigidimi Sa maXhosa (The Xhosa Messenger) under the editorship of Jabavu, while the English edition became known as The Christian Express. The newspaper ran content that excluded politics. In November 1870, Stewart wrote in his second editorial of the Kaffir Express:

“Our aim is to scatter ideas in the moral wastes and desert places of human ignorance and to aid general missionary work in South Africa.”

By 1888 Kaffir Express ceased publication and would be replaced by the Christian Express, the latter would continue running as a missionary newspaper. However competition mounted with the introduction of the secular Xhosa newspaper, Imvo Zabatsundu in 1888 in King William’s Town which was established by Jabavu, the former editor of Isigidimi.

The Kaffir Express had endeavoured over the years of its existence to disseminate information and embrace threatened values and to showcase its concerns for the “dispossessed, the poor and the powerless” says Brock.
It had symbolic significance to Africans because of its lasting association with Lovedale and survived political adversities. Its many volumes gave substantial record of South African political and social history from the perspective of missionary institutions that were seen as the reason behind the interaction of African and the European culture. The publication was later known as the Christian Express until 1922 when it again changed its title to South African Outlook.

In the 1880s, when legislation threatened the rights of African people, Stewart gave rise to African voices by using his editorship and Kaffir Express as their platform. Since 1870 most contributors wrote about changes in industrial relations, liquor and race relations, land and labour problems as well as education. Obituaries, biographies and personal notes were published, considering they gave context to the conditions of Eastern Cape coupled with race relations between blacks and whites.

Stewart died at Lovedale on 21 December 1905, and was buried on Sandili’s Kop, east of Lovedale.