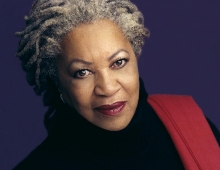 Toni Morrison, the African-American novelist, essayist, editor, teacher, and professor emeritus at Princeton University, died at the age of 88. The author of Beloved, The Bluest Eye and Jazz won both a Nobel and Pulitzer prize for her fiction and was the giant of African American literature. Morrison was the first African American woman to be awarded the Nobel Prize, for “novels characterised by visionary force and poetic import, gives life to an essential aspect of American reality.” We’ve pieced together a collection of some of her best interviews. Hit play and soak in her knowledge and wisdom.

“[It’s] as though our lives have no meaning and no depth without the white gaze. And I’ve tried my whole writing life to make sure that the white gaze was not the dominant one in any of my books. And the people who helped me the most were African writers: Chinua Achebe, Bessie Head. Those writers who could assume the centrality of their race.

Toni Morrison speaks about her first book, The Bluest Eye (1988)

“The very first book I wrote, called The Bluest Eye, I was not really thinking about publishing or reviewers or other readers, it was a book I wanted to read and I couldn’t find it anywhere. So I began to write it and it took forever. It’s been useful for me to think about it as a reader because it gives you distance and your ego is not all entangled in it you’re not just thrilled with it… I call myself a writer [now] because I only write when I can’t not do it.”

Toni Morrison Talks About Her Motivation For Writing (2008)

“When I wrote The Bluest Eye… I was deeply concerned about the feelings of being ugly, just how it feels. You’ve got the most vulnerable people in the world – children, female children, female black children who had never held centre stage in anything”

“That’s what writing is for me, it’s control. Nobody tells me what to do. It’s mine. It’s free and it’s a way of thinking. It’s pure knowledge.

Hit play and soak in icon’s knowledge and wisdom

A step towards normalizing homosexuality through a stage play