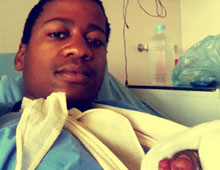 The Pain of an Unequal Society

South Africa is one of the most unequal societies. It’s an assertion we hear often. In the recent Nelson Mandela Memorial Lecture, French intellectual and international cause célèbre, Thomas Piketty highlighted this once more. But what exactly does it mean? A young postgraduate student at the University of the Free State spells it all out in painful terms.

I am a Journalism graduate and a researcher. I’ve been taught a healthy respect for the facts and the stats. But behind the cold figures of inequality are the stories of real people. So I want to tell you a small part of my own story.

Sometime ago my father, a mineworker, was retrenched. My mother has a meagre income from a government grant. I am lucky. I’m the second last child in a family of eight. The only one with the “privilege” of going to University.

After graduation I got an internship at the University as a Research Assistant. Finally I could let go of the state grant NSFAS (or the National Student Financial Aid Scheme). I receive a modest remuneration. 71% of it goes to rent and the rest to cover my fees.

My parents still have to send me money for food, clothes and day-to-day expenses.

Since being retrenched my father does ‘piece work’. He’s currently a labourer on a farm in Pretoria. But somehow my mum and dad manage to send me money to keep me going.

I used to live in a really cheap communal house. Only R 1 500 a month. But saving money almost cost me my life.

The place is about 2 km off campus. But that’s not the drawback.

One day we were in the kitchen cooking. We heard a loud crashing noise coming from the front door. Robbers were trying to smash through the door to get into the house. Instinctively we all ran to our rooms.

But once in my room I felt trapped. I didn’t want them to find me there. So I tried to jump out of the window. These student communal houses are cheap because the landlords don’t care and don’t bother with maintenance. Ours was rundown. The window was broken.

As I tried to jump out I cut my arm. The injury was serious. The glass cut across veins, arteries and into the tendon and muscle. A housemate rushed me to hospital. I almost bled to death.

The clerk at the hospital could see the state I was in but she didn’t care. The housemate who took me to hospital started quoting the constitution. My friend refused to move. I couldn’t move. The doctor came and agreed to stabilise me. No more.

The ‘stabilising’ turned out to be a bit of bandage that cost me R 2 500. My whole month’s rent. With the expensive bandage I left for the public hospital down the road. Things were no better there.

Without even a local anaesthetic they stapled my flesh together. The pain was unbearable. When I complained I was told:

“Keep quiet! You probably tried to rob someone.”

I explained what happened but they were not interested. Eventually they took me into the theatre and stitched up my arm… with a local anaesthetic this time.

But when it wore off the pain was so bad, I couldn’t sleep for a week. They gave me Panados and said the hospital did not have any money for stronger painkillers.

For months my work lagged behind as I could not type or do much. With occupational therapy, my hand is now almost back to normal. But I am beginning to think that I will never have full use of my arm again.

I moved out of the affordable house with the broken windows and now pay two thirds of my income, a thousand rand more, in rent for a decent place.

Capitalism Is To Blame

My experiences – these were just some of them – have helped me understand that capitalism, yes capitalism, lies at the heart of inequality and the entire crisis that confronts humanity today.

The problem is this maximizing of profit. A tiny section of the population accumulates all the wealth at the expense of the majority. This greed results in the unequal distribution of wealth and income and real pain for the people at the bottom.

The system concentrates wealth in the hands of the few. I read somewhere that 85 people in the world have wealth equal to half the world’s population. How can that be allowed to continue?

In South Africa, the wealth of just two people — Johan Rupert and Nicky Oppenheimer — is equal to that of half the population of the country… a website tells me.

In 2012, executive directors in the mining industry earned in one year what an average mine worker would earn in 325 years. In the same year, it was reported that over 400 000 workers belonging to COSATU earned less than R2 500 a month and over a million workers earned below R5 000 monthly. Recently it was reported (by Mergence Investment Manager) that CEOs earn 725 times more than their average employees.

What effect does this extreme inequality have on students?

Many low paid workers like my parents have to look after family members — primarily the unemployed, pupils and students. In 2013 ten million people relied regularly on others for income.

The figure of the ‘reliers’ does not encompass the unemployed only, which is overwhelming today in South Africa, but includes the students whose main source of sustenance at campuses – if they are without bursaries and other forms of financial assistance, (for accommodation, food, etc.) – is poorly paid workers. Most often their parents or other family members.

More than two million students enrolled in 2012. Whilst the student aid programmes are an issue for another debate, their funding disbursement delays create financial burdens for the families of the students. For those poor students not funded by any bursary scheme or NSFAS, the costs of their education has to be entirely covered by their working class parents. These costs basically include, but are not limited to: expensive tuition fees, expensive accommodation rent, expensive books, etc.

The lowest qualification at the top 5 universities in South Africa costs about R27 750 in fees. This fee amount is…

Let’s not even talk about the workers at the bottom of low paid category. The implications of this reality means the children of these workers, cannot afford to further their education in these institutions.

The conclusion is that education is for the rich. It is certainly easier for my fellow students who drive to campus in safe cars and live in comfortable accommodation where their lives are not endangered.

Given the fact that black people constitute the highest number of low paid workers, this further reflects how the apartheid slave wage system has not been dismantled.

I heard recently about a fellow student who was gang-raped and killed on her way home from university. My friend was mugged just the other day on his way to campus. They beat him up and took his cell phone.

How are we supposed to thrive and take up our positions as the future leaders of society when we have to engage in daily battles just to keep alive or stay safe?

South Africa is an unequal society. The University is a microcosm of the world we have created. I guess my experiences in Bloemfontein are merely preparing me for what’s out there.

I hope and pray our generation has the courage and the ability to bring about real change.