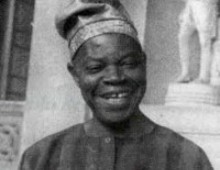 For many years, Amos Tutuola, the Nigerian author who was born in 1920 and died in 1997, was despised, ridiculed and made to appear exotic and primitive. He was dismissed by his critics as a relic of a dying and forgotten past of a dark continent that was awakening and harkening to the call of Europe’s colonising civilisation.

But something has shifted in the two decades since his death. His work, including novels like The Palm-Wine Drinkard (1952) and My Life in the Bush of Ghosts (1954), are increasingly influencing younger generations of storytellers and filmmakers. New editions of his works are surfacing.

I have given numerous talks about him at universities and research institutions across the continent. If these are anything to go by, scholars of different disciplinary backgrounds, students and intellectuals from other walks of life are keen to locate and read his books.

In an introduction to the latest edition of The Palm-Wine Drinkard Nigerian Nobel laureate Wole Soyinka suggests that Tutuola appears to be enjoying a “quiet but steady revival” both “within his immediate cultural environment, and across America and Europe”.

In my latest book I explore why this might be the case. I also examine why Tutuola’s work could inspire those at universities across Africa who want the decolonisation and transformation of higher education.

There is almost total discontinuity between the idea of knowledge in African universities and what constitutes knowledge outside universities and in African art and literature. The student-driven ferment wants popular “homegrown” forms of knowledge to be recognised and integrated into teaching and research. It agitates for ways of knowing informed by African experiences and predicaments, and especially by the continent’s frontier realities. These are realities, as Tutuola as a frontier author teachers us, that aren’t about zero-sum games of dominance and conquest.

This approach makes him best placed to point us in the direction of more truly inclusive, solidly Africanised systems of higher education on the continent.

A closer look at the universe depicted by Tutuola suggests it has a great deal to offer Africa and the rest of the world. His novels are not just works of fiction. They are founded on the lived realities of Yoruba society, which are shared with many other communities across the continent. They depict home grown knowledge systems that are very popular in Africa. The stories he recounts are commonplace across the continent.

Tutuola had only six years of frequently interrupted formal education. Elite Africans dismissed this as a modest and less than intellectual education. Yet Tutuola has contributed significantly to the resilience of ways of life and worldviews that could easily have disappeared under the weight of extractive colonialism, globalisation and the market economy.

Tutuola’s universe is one in which economies of intimacy go hand in hand with a market economy. Pleasure and work are expected to be carefully balanced. Balance is also expected between affluence and poverty, nature, culture and supernature. Tutuola draws on popular philosophies of life, personhood and agency in Africa. The principle of inclusive humanity is celebrated as a matter of course. The supremacy of reason and logic are not to be taken at face value.

Collective success is emphasised. Individuals cannot consider themselves to have succeeded unless they can demonstrate the extent to which they have actively included intimate – and even distant – others in that success.

It is not just his stories but his use of language that sets Tutuola apart. He writes in Yorubanised English. He forces the English language to accommodate Yoruba syntax.

As a lingua franca, English (domesticated and otherwise) gave Tutuola an opportunity to bridge ethnic divides. It’s an opportunity other Nigerian writers have grabbed too. Through it they are able to explore the possibilities and challenges of nationhood. They use it to seek recognition and relevance in an interconnected and dynamic world.

If Tutuola was an incidental writer, he was no less of an accidental intellectual – and an accidental postmodernist at that. We see this in his resolute refusal to live a lie by sacrificing the rich complexities of the Yoruba universe of which he was a part. He refused to let his culture be disqualified and defined out of circulation by a Eurocentric index of modernity.

Tutuola depicted the popular articulations of reality as honestly as he knew them. He revealed that the future was to be found in the impurities of blending and blended encounters with diversity. It involved reaching out, embracing and bridging difference, and facing up to the challenge that there is often much more – or much less – to things than meets the eye.

The lives of Tutuola’s nimble-footed, border crossing, adventurous guest-narrators show that transgression and contamination are experienced and indeed, welcome. He recognised and provided for the fact that the world and its inhabitants are both fathomable and unfathomable. Knowable and unknowable. Complete and incomplete.

So how does this all apply to the frontier reality of many an ordinary African caught betwixt and between exclusionary and prescriptive regimes of being and belonging?

I argue that nothing short of convivial scholarship would do justice to the legitimate quest for a reconfiguration of African universities and disciplines of knowledge.

A truly convivial scholarship doesn’t seek to define and confine Africans into particular territories or geographies, racial and ethnic categories, classes, genders, generations, religions or whatever other identity marker is in vogue.

Convivial scholarship confronts and humbles the challenge of over-prescription, over-standardisation and over-prediction. It is critical and evidence-based. It is a scholarship that sees the local in the global and the global in the local. It brings them into informed conversations, conscious of the hierarchies and power relations at play at both the micro and macro levels of being and becoming.

Like Tutuola’s universe, convivial scholarship challenges us – however grounded we may be in our disciplines and their logics of practice – to cultivate the disposition to be present everywhere at the same time. It’s a scholarship that cautions disciplines, their borders and gatekeepers to open up and embrace differences.

With convivial scholarship, there are no final answers. Only permanent questions and ever exciting new angles of questioning. Tutuola is precisely the sort of author to help generate those questions.

Zakes Mda on his new book, ‘The Zulus of New York’

“I write historical fiction to tame the past”