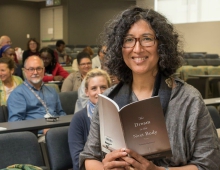 Renowned South African poet and academic, Gabeba Baderoon, is currently working on her fourth poetry collection, Axis and Revolution whilst in residence at the Stellenbosch Institute for Advanced Study. She read poems to a packed audience at Stellenbosch University which encompassed very personal depictions of love and betrayal, her family and home, and the power of photographic images.

“Poetry does something unusual. It makes time collapse. I can’t tell you how often poetry has helped to close the distance across thousands of kilometres and several time zones,” said Baderoon. Her latest work is drawn from her experience over the past decade and especially over the past six months where she has “been listening to poems in isiZulu, Sesotho and isiXhosa, pouring over translations, talking to poets. The breath of so many writers is in my ears. From them has come the inspiration for new poems,” she said.

She read some of her new poems including ‘I forgot to look’, which is a poem about how her mother entered the medical profession, and ‘Old photographs’, which looks at the power of images to remind us of those we love who have had a profound impact on our lives. “Poetry allows you to say what you cannot utter,” she said.

The prize-winning poet lives between South Africa and the USA, where she is an Associate Professor of Women’s, Gender and Sexuality Studies and African Studies at Pennsylvania State University. She started writing poetry 18 years ago and said she always feels like ‘a terrified beginner’ but is adamant that ‘poetry happens all over’.

“One of the most poetic lines I’ve ever read was scratched into the back of the plastic seat of a Golden Arrow bus that I read in the 1980s when I was attending university,” she said.

Baderoon’s work has taken her all over the world but her heart remains on the African continent. She was born in Port Elizabeth in 1969 and grew up in apartheid South Africa, a brutal and violent time where segregated schools, hospitals, busses were the norm. She spent her formative years in Athlone, a suburb of Cape Town, where her experiences shaped her as a writer and literary scholar.

“My family arrived in Athlone as a result of the forced removals in South Africa. So the 28 years in which I had grown the deepest, most solid roots in a place coincided with the time that my mother’s sense of home was abruptly cut off… History is one of the ways in which we remember the past but history is full of erasures. It’s the novelists, playwrights, singers and poets who have drawn attention to these absences,” she said.

Baderoon’s writing is precise, evocative, visual and often very, very personal. It provides a way for readers to explore complex ideas of identity and belonging in the contemporary world. She started writing poetry almost 20 years ago after attending an evening class.

“I started to write poetry when I was taken away from everything familiar. I took an evening class in 1999 a month after leaving South Africa on a fellowship. A few days before I left, my father died. That sense of disjuncture and tearing away was the birth of poetry for me. I was writing to all of those absences,” she said.

During this time, as her journey into poetry began she was not writing ‘so that other people could read it’, which she said was freeing. “Being set free from a sense of obligation to an audience has been good for me. Although in the broader sense I care very deeply about representing South Africa, addressing questions of race and injustice and politics – all of those things are part of what I think of as necessary for thinking and being in the world,” she said.

Her writing is influenced by her experience as a black South African under apartheid, as well as the fight and strength that came with liberation, however, she embraces a global audience.

“I don’t think of myself as writing specifically to a South African audience,” she said. “I think of myself as writing about a situation that is intricate and complex, and sometimes difficult. Whoever reads it has to do the work of receiving that difficulty and intricacy. It is possible to read difficult things and be enchanted. That enchantment should be what people bring to reading African poetry as well.”

She added though that poetry is not about pretty words. “As a literary scholar it took me a long time to understand that. Part of my mind had to learn what it meant to write poetry. Only eventually – through my teachers – I learnt that poetry is not about making words attractive. It’s about remembering when words do something you cannot forget… Poetry is not always pretty but sometimes it brings us close to beauty.”

Her work is deeply important in capturing both the past and addressing issues facing the modern world.

“Imaginative work asks us to reflect on why we are looking here and not there. It allows us a powerful, evocative way to look at the grounds for understanding what truth is. I think poetry has a very important role to play but there is also risk – poets are not soothsayers – anybody unquestioned is in a dangerous situation. But poetry and other creative arts should be alongside truth-telling areas like science and journalism and all the other ways in which we reflect on the complexities of the world.”