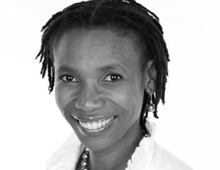 The writer began her media career at the age of 17. She is now an honoured journalism fellow, lecturing at many institutions including the Media 24 Journalism Institute.

The Pioneers section of The Journalist fascinates me. Why? It resonates with my world as a media practitioner. By all accounts I am an accidental journalist. Many black intellectuals became journos through force of circumstance.

The Pioneers section takes me back to the innocent age of 17, when I wrote my first publishable piece. A letter to the editor to the Sowetan. When I first saw my contribution in print, accompanied by the then editor-in-chief’s Dr Aggrey Klaaste’s response, I felt honoured. I was instantly catapulted into the world of social commentary. My 120 word piece was decrying the inhumane manner in which necklace victims suffered at the hands of the perpetrators and onlookers who stood by helplessly, unintentionally becoming accessories.

My account of that experience made a call to action to the publisher to play a mediatory role. By this time I had repeated matric twice due to the unrest. I Had had two experiences with mob psychology and a brush with mob justice. On both occasions, while sitting for Accounting and Afrikaans exams respectively, our question papers were violently ripped out of our hands and burnt to ashes, in our witness. It was horrible. Anyone who ever resisted was assaulted along the way. So, I took refuge in my own arms. A pen and paper vented my frustrations.

Later on, when a friend introduced me to an entertainment editor at the Sowetan, I was given an opportunity to experience life in the typewriter era newsroom. Aggrey Klaaste who was an icon of peace brokering at the time, took me under his wing. My regular visits to his office opened me to a wealth of the political and economic history of the media. It introduced me to a class of African intellectuals who pioneered the resurgence of the early black press.

Klaaste’s impeccable storytelling ability consistently drew me to his office where I would find him in the company of his peers such as veteran Poet Don Matera. During their intellectually charged conversations I would harvest a list of African press pioneers.

The black press emerged in the mid-1840s and was influenced by the missionary colonial education. This era produced giants such as Tiyo Soga, the first black literary figure, co-translator of the Bible and Pilgrim’s Progress into Xhosa. Soga was associated with the magazine Indaba (1846) whose object was to stimulate the study of English amongst Africans. In Soga’s words the newspaper would help stabilise society. In between there were many other publications that were controlled by missionary or European influence.

The transition between the colonial missionary media and the emergence of the Independent Black Newspaper proprietors 1884-1932 showed signs of protest press by Africans. It was John Tengo Jabavu’s Imvo Zabantsundu that would break the mould in 1884. It would claim its place as the first independent black newspaper published in Xhosa and English. Allan Kirkland Soga and Walter Rubusana’s Izwi Labantu was a counter to Jabavu’s Imvo.

While there were many Tswana publications prior to Solomon T Plaatje and Silas Molema’s purchase of Koranta ea Becoana, a Tswana/English newspaper from George Nathaniel Henry Whale in 1901, it was this newspaper that would be the first ‘native owned ’ Tswana paper. Plaatje was the editor. It was however, forced to shut its operations amid disputes with its white initiators and eventual bankruptcy, around 1908. Plaatje, the first African South African to have had a novel published, Mhudi, translated Shakespeare’s works into Tswana. He was committed to ensuring that the Batswana remained players. He published a Tswana/English newspaper in 1910, Tsala ea Batho.

H S Tlale played a major role in founding the first Sotho newspaper Mochochono (The Comet) in Basutoland, now known as Lesotho, in 1911.

Then there was proprietor and editor Francis Zacchaeus Santiago Peregrine, well-travelled and educated from West Africa who was one of the people that was embroiled in the Koranta controversy. He had now moved away from Kimberly to Cape Town and there he launched the South African Spectator, out of curiosity. In the early 90s Levi Khomo became an editor of Leihlo La Sechaba (The Native Eye) the first African-owned newspaper in the Transvaal, that served the black clergymen’s interests.

Maake Mangena Mokoena and J M Dwane had broken away from their white-controlled churches and the publication was seen as a threat to the existence of Christianity. Official of the Native Commissioner’s Office targeted its editor and victimised him. It drove him almost nuts. A mounting debt worsened its fate that is unknown beyond 1905.

When the Columbus and Oxford Universities educated Pixley Ka Izaka Seme and three other lawyers – Alfred Mandena, R.W. Msimang and G.D Motsioa – founded the African National Congress (ANC), he conceived the idea of establishing a newspaper that could be used as a mouthpiece of the organisation. Abantu-Batho was launched in 1913, a merger between Molomo Oa Batho and Morumia, with C Kunene as English and Zulu editor and D S Lentaka as Sotho editor. As an effort to undermine Abantu-Batho, the Chamber of Mines launched Umteteli Wa Bantu. Umteteli was meant to educate black and white, equally pointing out their respective and common duties at a time when the native press was bitterly anti-white in policy.

This era taught me one thing that establishing an independent black publication was not easy. I learnt that most of the early black press was a reaction to the missionary press and was unfortunately thwarted by the Bantu Press Pty Ltd that sought to commercialise black media consumption, introducing the Bantu World.

Being with The Journalist at this moment where I am in the good company of the Pioneers feels like I have come full circle. In this section, we promise to profile the history of known Pioneers and some of those who may have been lost in the cracks, not only as journalists but as literary figures.

Most, became journalists by default. We now know that literature and journalism were in South African literary history, Siamese twins, as Couzens aptly wrote. This section is therefore important as we collectively contribute to the preservation of the history of South Africa. The Journalist has already covered some of the Pioneers referred to earlier, and promises to examine the commercialisation era, the Drum era and women Pioneers in no particular order.