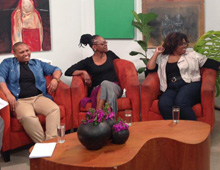 The role and representation of women in our media will come into focus in a three-part TV magazine to be broadcast on Community TV in December.

A television documentary produced by Accidental Films and TV called Engender is set to open dialogue on the manner in which the media portray women.

The television magazine programme takes its name from the verb to engender. Its title plays with the meaning of the word through its goal to engender a more equal and just world with regards the valuing of women and men in society; and through its specific focus on gender, the last two syllables of engender.

This dynamic hour-long programme uses vox pops, inserts, animated text, graphics, and presenter facilitated studio discussions to explore and expose gender inequalities in South African society with a view to engendering an understanding of feminism and its goals.

According to Accidental Films and TV founder, Tina-Louise, the aim of this pilot programme is to make feminism more accessible in society.

“We have been living in a democratic society for over 20 years now and we were promised freedom and equality. We believe that gender rights are human rights and that everyone who believes in equality, is at heart a feminist,” she said. “Our three-part pilot examines society and argues that feminism is still needed in a country hailed for its progressive Constitution, and in a world where we can communicate instantly with friends in different time zones. Despite policy and technological advances, we struggle to advance into a lived experience where we are treated equally regardless of where we place ourselves on the gender continuum, where boys are not discouraged from pursuing ballet, or girls are allowed to be raucous, where men may express their vulnerabilities and women may be confident without being called aggressive, feisty, or bossy.”

Episode 2 of this 3-part pilot programme examines the way media represent people through a gendered lens that normalises stereotypes based on perceived genders and sexualities. Panellists in discussion are Women’s and Gender Studies lecturer at the University of the Western Cape, Professor Desiree Lewis, AllAfrica.Com Managing Editor, Juanita Williams and SWEAT Media and Advocacy Officer, Lesego Tlhwale.