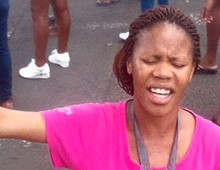 Following the violence at Shimla Park the Christian Revival Church (CRC) held a prayer service dedicated to peace, love and unity. Ace Moloi takes a critical look at the role of the church in combating racism and social injustice beyond idealistic symbolism; and considers what it would really take for religion to play an active role in the fight for equality

The church’s approval of colonialism

Addressing the World Consultation of the World Council of Churches (WWC) on the role of the church in combating racism in Holland, June, 1980, Oliver Reginald Tambo remarked: “Pursuing its purely evangelical mission, the Christian church continued to hold out the promise of the good life to the poor, the suffering and the despised, but only after death. By refusing by and large to do anything about the life of these poor masses before death, it got itself further involved in what looked increasingly like a conspiracy to convince our people to bear their earthly tribulations patiently and submissively in the hope of a better future in the world to come.”

O.R. Tambo further characterised the history of the Christian church in South Africa as one of “a faith betrayed”, saying, “the church continuously refused to recognise the fact that the fulfilment of its black congregation lay in their liberation both from colonial domination and from what the church describes as sin”. To elaborate on the latter point, he explained: “While denouncing as sinful the coveting of their white neighbour’s possessions by the black people, the church did not condemn as sinful the reduction of the black by the white into homeless and propertyless beggars. While issuing injunctions of forbearance to the black, urging them to eschew violence, it avoided condemning colonial State violence against the black people.”

The decolonisation movement in SA universities

South Africa is currently experiencing a revolution aimed at overthrowing colonial and capitalist systems in institutions of higher learning. True to the dialectical nature of every revolutionary process, systemic feathers have been ruffled by these decolonisation movements, creating tensions that transcend institutionally established colonial arrangements and affect social relations. Therefore, the battle becomes not only that of changing systems, but rearranging the positions of human beings in relation to the very same systems facing a revolutionary fate. The decolonisation project in universities entails the destruction of colonial symbols such as statues, the renaming of buildings from divisive apartheid villains to champions of human solidarity such as Robert Sobukwe, achieving free education and doing away with all socio-economic prejudices, reclaiming the dignity of workers in universities by ending outsourcing, offering living wages to cleaners and guards, etc.

Based on the above-mentioned, Christian values and principles leave the Christian church with no option but to join the masses of students and workers in their fight for these noble objectives in their lifetime. I learnt with astonishment that following everything else that has been happening at the University of the Free State – whites beating up black protesting students and workers at a rugby match, rising racial tensions and continued #EndOutsourcing protests – the Christian Revival Church (CRC) held a prayer service dedicated to “peace”, “love” and “unity”. Of course, viewed independently, there is nothing shocking about a prayer service aimed at the attainment of “peace”, “love” and “unity”. However, given the context, the CRC and the Church at large has a far more meaningful role in combating racism and social injustices than idealistic symbolism and opportunistic PR stunting.

To begin with, the Church was nowhere to be found when students and workers began their protests. It was only when black students stood up for themselves after the Shimla Park incident that the Church returned to its colonial imperative to “bless the arms of the oppressor and to damn the oppressed for bearing arms in the struggle for liberation” as O.R. Tambo stated in his speech. Such is the ubiquitous nature of white supremacy, which rears its arrogant head in programmes of the Church.

Considering the size of the Christian community on campus and in surrounding areas, Christians should actively participate in the struggle against outsourcing, not organise a self-serving parallel public display of holiness. Believing, without a doubt in their collective anointing, the so-called “prayer warriors” should have joined the protesters with full confidence that their very participation in the protest would result in peaceful proceedings and unity of anti-slavery purpose. Christians betrayed their faith when they failed to give it a practical assignment, especially since such an assignment would lead to human fulfilment, social justice, love and human dignity. When protesting workers get in-sourced, the standard of living in their households will improve for the better. They too will have benefits like other university employees. No Christian should prefer mass prayer over actual mass solidarity in this matter. Besides, when the prayer services end, the rich go back to their suburbs driving in cars, while the poor return home to depend on the miserable wages earned by their exploited working class mothers against whose justified anger they were praying.

If the Christian church truly is the first contact point with the Kingdom of God, it needs to marry faith with actions in its response to pressing social ills such as racism, inequality, financial exclusions, exploitative labour practices and the pursuit of social cohesion. It must be an advocate of the poor and oppressed. Rather than urge the poor to “bear their earthly tribulations patiently and submissively” until Thy Kingdom Come.
These protests are about right and wrong, good and evil. They afford the Church an opportunity to right its wrongs and play a role in correcting the colonial damage it caused on indigenous people. We are where we are, fighting these battles, because of the Church’s approval of colonisation as “a civilising mission”.

“Colourblindness” and the act of self-absolution

In response to the arrogant racism and violence by whites against blacks during the rugby match, CRC embarked on the self-absolving and anger-neutralising #colourblind bandwagon. Bowing to its in-house class conflicts, it aspired to make its white congregants feel better about their unearned privilege, while subtly bullying into submission the pain of its black followers.

There is everything wrong with the #colourblind slogan. In South Africa, the triple challenges of inequality, poverty and unemployment are advertised on black faces. To not see colour is to not recognise black suffering. To not see colour is to make beneficiaries of apartheid, itself a universally declared crime against humanity, feel absolved from injustices.

It is sad that even today the Church is failing to confront injustices while, as per O.R. Tambo’s statement, “issuing injunctions of forbearance to the black, urging them to eschew violence” but not “condemning colonial state violence [racism, exclusion, exploitation, racially motivated violence, police brutality] against the black people”.

With or without the Christian church and its self-righteous members, young people will overcome their “earthly tribulations” in their lifetime, not “in the world to come”, despite the Church’s ulterior motives to separate one from the other, “the temporal and the sacred, the material and the spiritual”, as O.R. Tambo lamented.

We at The Journalist wish to salute former Capetonian and student at the University of Free State Wayde van Niekerk for his astonishing achievements on the athletic tracks of the world. This young man has become the first person in history to run the 400m in under 44s, the 200m in under 20s and a […]

What is the future for The Black Child?

A student reflects on her shattered reality

“We have dreams for our children”