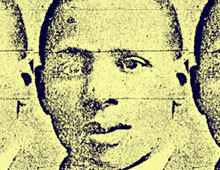 Various members of the Msimang family were important movers and shakers in the 19th and 20th century. Father Joel Msimang was a founder of the Independent Method Church and his son Selby was a key political figure and writer. Today we focus on Selby’s brother, Richard who was active in politics and journalism and was a Master of English Jurisprudence.

Richard William Msimang was born in Edendale in 1884. He was a brother to Selby Msimang. Both were sons of a well-known preacher and founder of the Independent Methodist Church, Joel Msimang and his wife Joanna.

As a young person, he led a wonderful life. As an adult he became one of the first pupils to co-found Ohlange Institute in 1901 with John Dube. Then later he went to the Eastern Cape to further his studies at Healdtown Institute before spending a decade in Britain and later practised law at Queens College, Taunt, in Somerset. He mastered English Jurisprudence and became the first African from South Africa to be a Solicitor of the Supreme Court of Judicature in England.

In November 1910 he opened his private firm of attorneys in the Transvaal. His love of politics saw him become a one of the co-founders of the African Native National Congress (SANNC) for which he was appointed as a legal advisor after the passing of Alfred Mangena. In 1919 he chaired the committee that penned the constitution of the ANC.

When the Natives Land Act 1913 became law he and Sol Plaatje traversed rural areas to document effects the Act had on Africans. Msimang compiled a list of evictions including details of the individuals and their livestock.

On the Explanation Notes on the Natives Land Act of 1913 as per Ntongola, Masilela in The Historical Figures of the New African Movement,  Msimang wrote, “[t]he immediate purpose and object of compiling together few instances-for they are comparatively very few instances of actual cases of hardships under the Natives Land Act 1913 – is to vindicate the Leaders of South African Native National Congress from the gross imputation by the Native Affairs Department, that they make general allegations of hardships without producing any specific cases that can bear examination. In other words, the charge is, they make wild statements of existing hardships which they fail to support by concrete facts.”

He made significant contributions to newspapers such as Tsala ea Batho of Sol Plaatje. He wrote an essay focusing on how Africans were affected by the Medical Law called Medical, Dental and Pharmacy Act of 1928 in Umteteli wa Bantu. The article was titled, The New Medical Act, published on December 22 and 29 in 1928 and again on 5 January 1929. Msimang was instrumental in merging Umlomo wa Bantu of Saul Msane and Thomas Mvabaza with Seme’s Abantu-Batho in 1916 thus maintaining his association with the paper. Even when Msane and Robert Grendon were fired by Seme, they brought a lawsuit against the paper with Msimang in charge of the process.