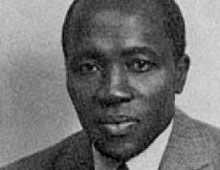 AC Jordan was a novelist, poet and academic who became the first African to receive a PhD in phonological and grammatical study at the University of Cape Town (UCT).

Archibald Campbell Mzolisa Jordan, a novelist, an academic and author, was born in 1906 in Mbokothwana Mission Station near Tsolo in Pondoland (now Eastern Cape).

Jordan went to St Cuthbert’s Primary under Mbokothwana Mission. After finishing his primary school education he went to Alice to further his education at Lovedale College where he got a Junior Certificate, also known as Standard Eight (now Grade Ten).

At that time, Imvo Zabatsundu had already established itself as one of the household brands in the printed word industry. And Jordan would build his legacy as his poetry would be published in the newspaper with one of his Xhosa poems about the invasion of Abyssinia by the Italians under the stewardship of Benito Mussolini.

He would go on and publish a novel, Ingqumbo Yeminyana (The Wreath of the Ancestors), described as a “tragic epic about conflict between Western-style education and traditional beliefs”, wrote Verwey in New Dictionary of South African Biography Volume 1.

Jordan was more than a novelist, he was an academic of note. After obtaining a BA degree in 1934, aged 28, he was awarded an MA in 1944 by the University of South Africa after completing a thesis on the phonetic and grammatical structure of the Baca language.

In 1945, he accepted a post as a lecturer at Fort Hare University’s Department of Bantu Languages following the retirement of Davidson Don Tengo Jabavu.

In 1956, Jordan became the first African to receive a PhD in phonological and grammatical study at the University of Cape Town (UCT). This achievement was followed by a lecturing post he also accepted at UCT. Jordan passed on Sunday 20 October 1968.