Manenberg: Gun Shots Any Time of the Day

[intro]This week in our Spotlight section we carry the story of a brave group of young girls hoping to make a difference in Manenberg. Recently the government’s Operation Fiela, a nationwide anti-crime initiative, boasted impressive results. But little changes for the people who live there. This report was originally published by GroundUp at www.groundup.org.za[/intro]

Recently in gang-plagued Manenberg, a number of shootings took place. Residents said it was one of those “worse weekends”.

Driving through the area, the neighbourhood appeared quiet with a few people walking to the local spaza shops. One would never know that just a few hours before, bullets were flying.

At Downeville Primary School, not far from Kathleen Heights where most of the gang shootings take place, GroundUp spoke to two grade seven school kids about the constant violence here.

One of the pupils, a 12-year-old, told us about her experience two weeks ago when her grandfather was shot right in front of her.

“My grandfather and I were on our way to my grandmother who was at a private clinic with my sick brother. As we were walking, they shot him through both legs. We were caught in the crossfire.

“He fell to the ground. I ran away to get help and I came across my grandfather’s friend, who immediately came to help him.

“If I hadn’t gotten help, the gangsters would’ve come to finish him off, because that’s what they do; they don’t want to be identified. It happened on a Saturday at around 1pm. I was very lucky.

“I study under the bed or in the toilet just to be safe and to not hear the gunshots. My grandfather is in hospital now. It’s very tough around here, sometimes we can’t even go to school because when we walk to and from school, they are not scared to start shooting right in front of us. I’ve seen them many times shooting at each other,” she said.

The pupil says she has also seen the gangsters shooting at police on patrol in the area.

Another Grade 7 pupil said she lost an uncle in January.

“We didn’t know that he was a gangster because when he was with us he was a different person. He was our uncle. He never did any gang related things in the house. He was shot. He was 28 years old.

“I don’t leave the house because I’m scared I’ll be shot. They shoot anytime of the day here. I only leave the house when coming to school and go back home from school. I stay indoors and do my schoolwork. Sometimes I study under the bed or in the toilet just to be safe and to not hear the gunshots. 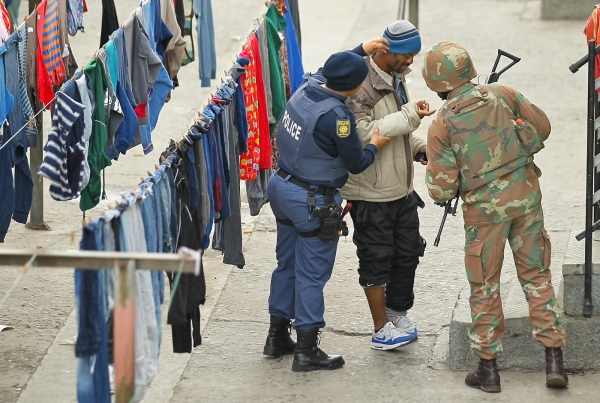 “The police or the army should come in and collect all the gangsters in their houses and keep them in jail … It doesn’t mean that just because their lives are messed up they should mess up our lives. We have a future,” said the pupil.

“The lock-down operation yielded significant results as 20 suspects were arrested. Eight suspects were arrested for drug related cases; two for possession of dagga and mandrax tablets; and five for possession of illegal firearms. Three firearms, 50 mandrax tablets, 35 tik packets, 18 “stoppe” dagga were confiscated during the operation. The search and seizure operation was followed by patrols on the streets in Manenberg and along local schools in the area,” said Rwexana.

But community leader Roegshanda Pascoe says the operation didn’t help because the gangs were aware of the police plans and were prepared for it. She said a day after the operation happened, the violence started again.

This past weekend, the Manenberg Safety Forum of which Pascoe is a member marched against gangsterism to Parliament to handover a memorandum. 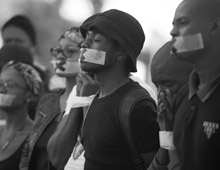 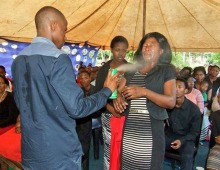 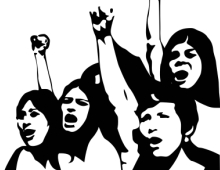