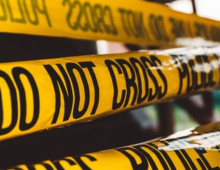 Crime on the rise in Free State’s Matjhabeng Municipality

The City of Welkom falls within the Free State’s Matjhabeng Municipality and suffers from mining-related crime and electricity theft, but Welkom’s current crime issues should not be a scapegoat for its governance failures, writes Tshiamo Malatji.

There is a shocking crime wave that is spreading through the Welkom area of the Free State. This is according to Senior Sociology Lecturer at the University of the Free State, Dr. Sethulego Matebesi. “Mining areas across South Africa are vulnerable to several social challenges, including crime,” he said. “However, the general breakdown or weakening of formal agencies of social control such as the criminal justice system, contributes to high levels of crime. In Welkom, the mining industry seems to be attractive to criminals who no longer have other means to satisfy their needs.”

Welkom has experienced a sharp socio-economic decline, which represents a greater issue of crime in the Matjhabeng Municipality. In December 2017, the Sunday Times reported on multiple mine closures, enormous municipal debt, economic slowdown, illegal mining and the killing of Simphiwe Kubheka, regional manager of the Harmony Gold mine. On 29 October 2018, Fernando Paulino Mungoi, a Harmony Gold shift manager, went missing ten days after his house was robbed and vehicle stolen. On 5 November 2018, Charmaine Botha, the wife of Harmony Gold plant manager Johnny Botha, was abducted for a ransom of gold bars. On 10 November 2018, a video went viral of armed assailants who shot and killed Shai Mikia Mohapi, the Chief Safety Officer of the Sibanye-Stillwater mine, in a parking complex before stealing his car.

While these criminal activities are shocking, there are concerted efforts to respond to these incidents. The Directorate of Priority Crimes Investigation (Hawks) arrested nine people in connection with Botha’s kidnapping on 9 November 2018. Two days prior, she had been successfully rescued. On 12 January 2018, the Hawks, acting off information from Interpol, arrested six people believed to be involved in a human trafficking operation in Welkom, rescuing up to 11 people. Local police also arrested four people on 14 November 2018 in connection with Mohapi’s murder.

However, recent efforts by government authorities to resolve crime in the region will need to undo years of negligence. This is no easy task, as evidenced by the region’s current electricity woes. Eskom has threatened to interrupt the power supply in the Matjhabeng Municipality from 10 December 2018 if it does not honour payment obligations toward its R2 billion debt by 3 December 2018.

With this impending crisis, the easiest scapegoat are illegal miners and residents who fail to pay their electricity bills. Certainly, a major contribution to this debt is the theft of electricity. The findings of an audit of the municipality’s meters were revealed in a hearing by the Select Committee of Public Accounts (SCOPA) in June 2018.

“Consumers were stealing from the municipality through illegal connections,” states the SCOPA hearing summary. “It was found out that even those who can pay are stealing electricity.”

However, crime alone cannot explain how the municipality’s debt to Eskom has steadily increased without any meaningful intervention from the municipality. In February 2013, Matjhabeng owed Eskom R145 million. The municipality now owes R2 billion. Moreover, with sufficient pressure, the municipality was able to meet some payment commitments along the way. The 2015 Eskom Integrated Report states “Judgement was issued in February 2015 against Matjhabeng in the Free State, with a six-month sentence being handed to the municipal manager, suspended on certain conditions that centred around payment of their electricity account. Matjhabeng has since made some payment with their equitable share”.

Electricity theft only partially explains this narrative. Welkom’s governance has certainly contributed to its current woes. In June 2011, media outlets were already reporting on wasteful expenditure in Matjhabeng, dubbing the municipality, “One of the country’s worst-run municipalities.”

The 2010/11 local government audit revealed that the municipality contributed to 38% of the Free State’s irregular expenditure which the audit blamed on “total disregard for SCM (supply chain management) policies and procedures” and not making efforts to collect money owed to the municipality.

Matjhabeng was again the primary contributor of irregular expenditure in Free State in the 2016/17 local government audit contributing R327 million of the total R675 million. The report states that the municipality’s sanitation project was “an example of poor project planning and management due to plumbing errors and irregular contractor appointments.”

Matebesi claims there is a link between governance and crime. “The issue of weak governance structures, lack of ethical leadership, and the political will to deal with the issue of crime is affecting SA as a whole,” he said. This is evidenced in the recent municipal workers protest over outstanding payments from the municipality which was initiated on 14 November 2018. The local government’s financial mismanagement is cited as the cause of the protest.

Although Welkom suffers from mining-related crime and electricity theft, attention should be paid to the governance which has overseen the rise of crime in the region.

“The issue pertaining to Welkom is, why has our crime intelligence agencies not been able to crack such criminal activities? The residents of Welkom are naturally living under strenuous conditions due to the recent crime wave. Only a state who does not care will allow its citizens to be kept prisoners in their own homes,” Matebesi said.

National attention has been granted to Mohapi’s murder and recent arrests reveal an urgency by authorities to resolve the crime. However, Welkom’s current crime issues should not be a scapegoat for its governance failures.

Investigative journalism in a dystopian present

Collaboration rather than competition is the lifeblood of the craft

Crime on the rise in Free State’s Matjhabeng Municipality