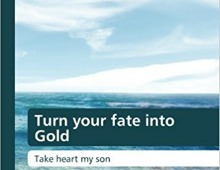 Mfuneni Barnabas Mabunda hails from a village in Mpumalanga and is the author of “Turn Your Fate Into Gold: Take Heart My Son”. The novel portrays the many struggles faced by black South Africans through the character, Topson Makhandla. Magnificent Mndebele talks to the writer about being inspired by real life experiences.

Topson Makhandla is an intelligent young man who passes high school with flying colours. But he fails to secure a bursary for tertiary education and enters the working world instead as a Magistrate Clerk that barely earns enough to feed his family.

With very little money in his pocket, and looking to make a quick buck, Topson gets himself involved in bomashonisa (loan sharks) in order to please his wife, Letta, and support his son, Jabulile. The story links very closely to the writer’s own life.

“I was inspired by my life and the magistrate clerk life. I worked for seventeen years as a magistrate clerk,” said Mabunda, who started working in 1984 and resigned in 2001.

“Similarly to Topson, I was not satisfied with the salary I was getting. I know how it feels to [earn a meagre salary] and to be hunted by mashonisa, all those things I have a real experience of,” said Mabunda.

The book is well written and gives you insight into the psychological strain of constantly being under financial pressure, as well as the desparation that causes people to go as far as committing suicide. Topson is eventually offered a well-paying job, but the gig on offer had a catch. His job was just to be a translator in an illicit deal of exchange of emeralds as there was a language barrier between the buyers and a seller of the emeralds. Such temptations are hard to resist especially when you are heavily indebted.

The aftermath of this part-time job led to Topson Makhandla losing everything he cherished and valued: his job, his family and happiness. To make matters worse, he is robbed of R5 000 and a precious watch he had won while in high school.

Questions nag at Topson after his ill fate and he finds himself hospitalised as he collapsed on the spot where the robbery took place. He is ashamed to face the world again and death seems to be the only solution after the fate brought about by scoundrels.

But the hero’s situation quickly turns around and soon, great things start to happen for him.

Great things were yet to happen for Topson after he had lost everything. One night in a dream, he hears the following words: “Don’t panic, for what is befalling you is the pregnancy of blessings. It is a bridge towards your crown. Don’t impair yourself with worry. Be strong and courageous.”

As the dream prophesised Topson’s fate soon turns into gold. What would make an author craft such a novel? “Writers are inspired by true events that happened in real life…” reads a quote near the end of the novel.

Take a moment to read this extraordinary novel, inspired by true events.

Buy the book on Amazon.

Hunted by bomashonisa, hit by depression and eventually turning the tide

Review: A History of The Iziko South African National Gallery