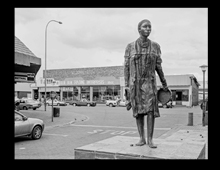 Goldblatt’s small frame stands among the powerful black and white images. With a slight and wrinkled smile he leads the group of visitors at the Johannes Stegmann Art Gallery, though his photography exhibition that explores our history and future through statues, monuments and structures.

With the removal of the Cecil John Rhodes statue at UCT earlier this year, statues and memorials around the country have begun to play an important role in how we remember our history, and transform and build our society moving forward. Renowned South African photographer, David Goldblatt, has been travelling around the country for more than three decades, photographing sites and structures heavy with historical meaning. His latest photo exhibition, Structures of Dominion and Democracy, in the Johannes Stegmann Art Gallery, at the University of the Free State, is a taste of his extensive collection and looks at the statues and people who have shaped our country.

During the dark days of apartheid, Goldblatt photographed structures around the country that spoke to the domination and oppression exerted by white settlers such as Jan van Riebeek and the oppressors of the apartheid regime. The dawn of democracy has seen him capturing new structures that have been erected, with the understanding that what we build plays an essential role in the construction of our ideals and principles as a nation.

“I have photographed some structures that are eloquent of our still nascent democracy. In the belief that in what we build we express much about what we value, I have looked at South African structures as expressions and declarations of values. They speak of our ethos,” he said. 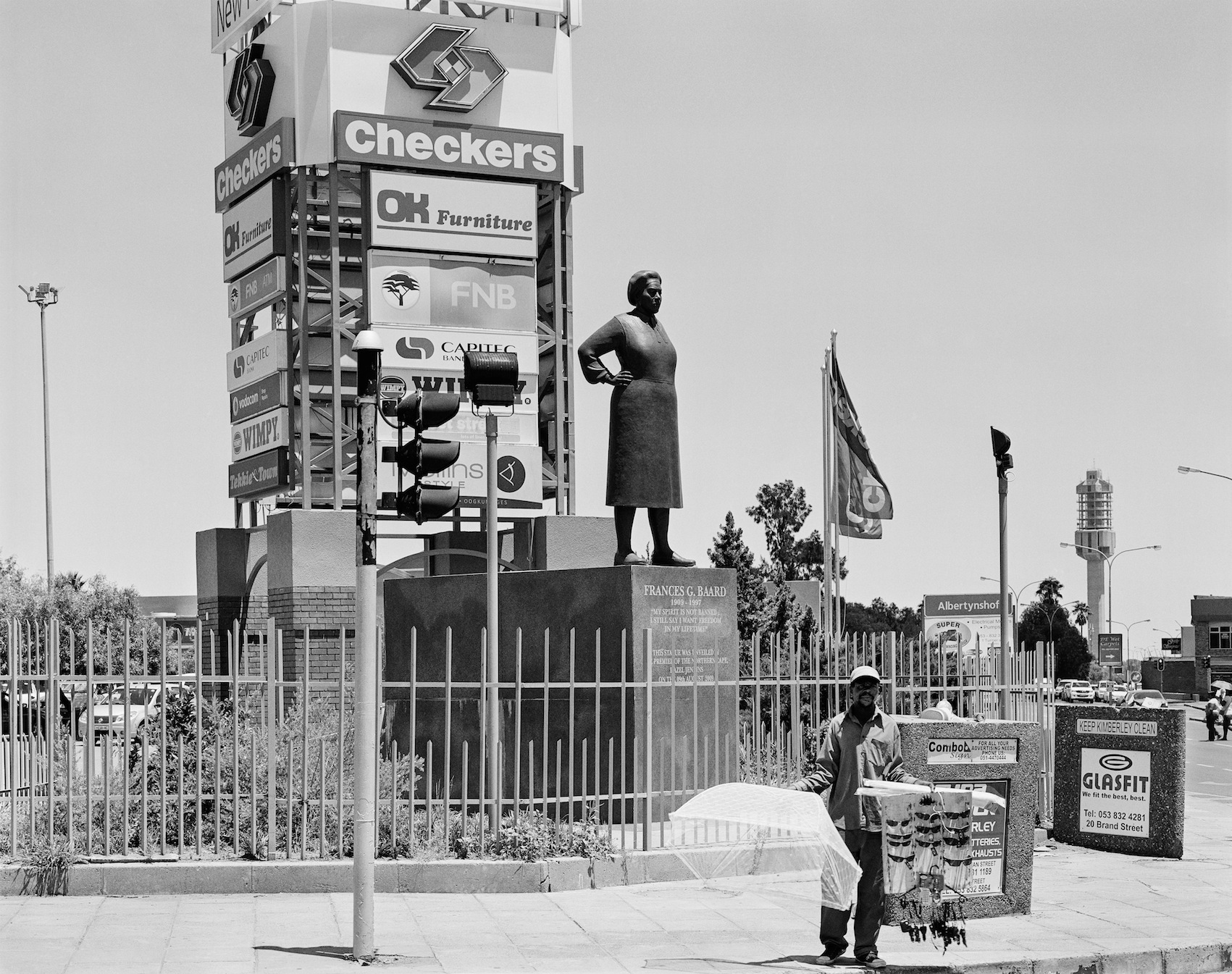 Born in 1909 (some say 1901) she was a teacher, domestic worker and factory worker. She helped draw up the Freedom Charter, was one of the leaders of the Women’s march against Pass Laws to the Union Buildings in 1956, and went on trial for treason with Nelson Mandela and others in 1956. She was arrested in 1960, again in 1963 when she was held in solitary confinement for 12 months, and again in 1964 when she went to prison for five years for her ANC activities. After release in 1969 she was banished for two years. She died at Mabopane in 1997.

His extensive photographic collection includes images of Frances Baard’s statue in Kimberly; the Women’s monument at the Union Building in Pretoria; the statue of Voortrekker pioneer, Susanna Smit in Kwa-Zulu Natal, as well as Saartjie Bartmann’s grave, which is situated near her birthplace in Hankey, Eastern Cape.

Baard stands tall, hands on hips; her statue dwarfing a man who stands on the corner, selling sunglasses to cars passing by. Baard was one of the leaders of the ANC Women’s League and militant trade unionist. Born in the early 1900s, Baard was a teacher, domestic and factory worker who was instrumental in drawing up the Freedom Charter. She was one of the leaders of the 9 August, 1956 Women’s March, which saw 20,000 women marching to the Union Building to hand in a petition against carrying passes to then Prime Minister JG Strydom singing the struggle song, “wa thinta abafazi wa thinta imbokodo”.

She went on trial for treason with Mandela and others in the same year, and just four years later, in 1960, she was arrested. Baard faced solitary confinement for 12 month in 1963 and 1964 when she was jailed for five years for being involved in ANC activities. After her release she was banished for two years. She died in Mabopane in 1997. 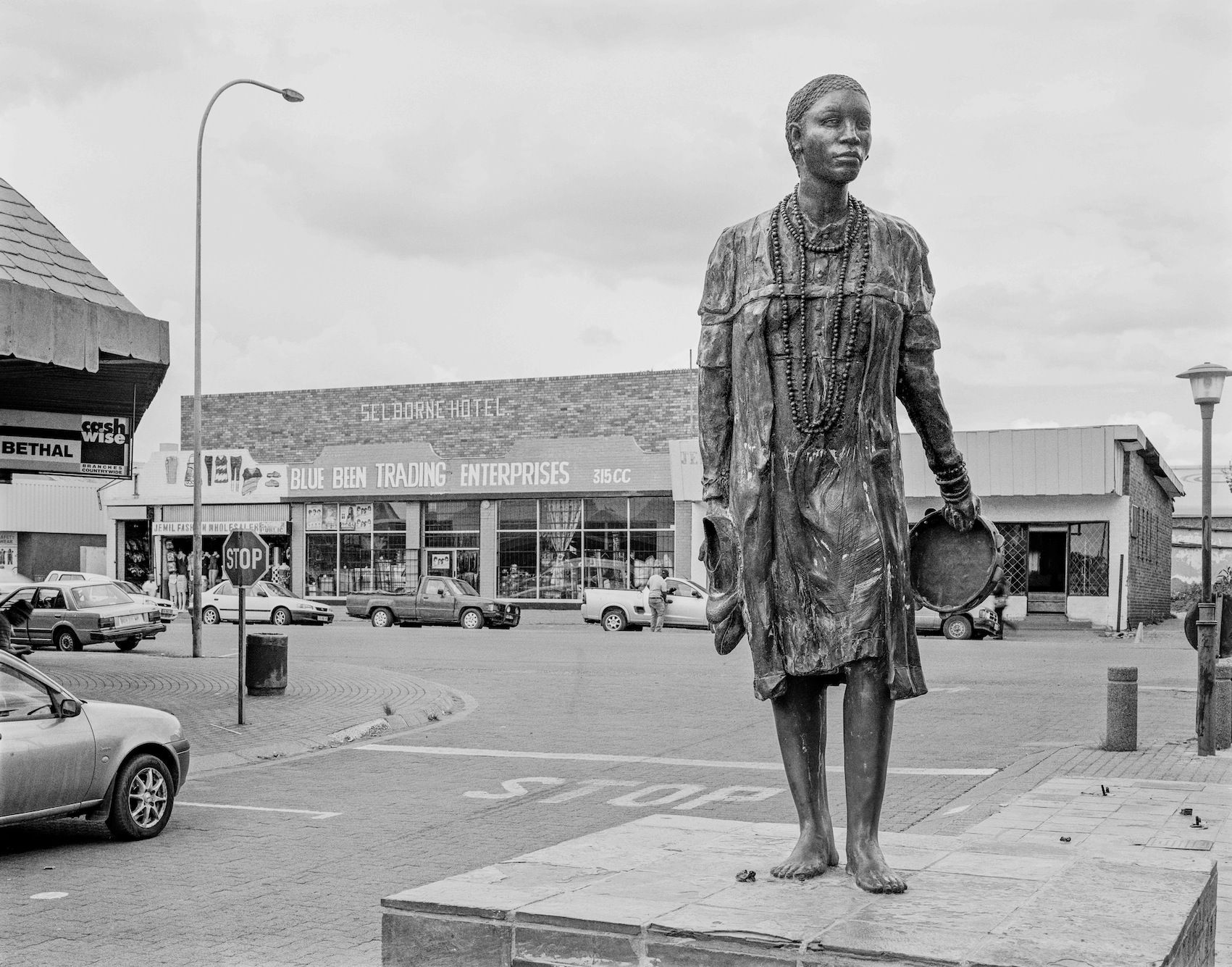 Photograph by David Goldblatt, Memorial to Nokuthula Simelane, who became a courier for the ANC. Trapped by the Security Police in 1983, she was severely tortured, then murdered and disappeared. The sculpture is by Rohan Janse van Vuuren, Bethal. 14 February 2014. Image courtesy of the artist and Goodman Gallery.

For some 32 years her family have tried to discover where her remains were buried or destroyed. Hers is one of many cases in which the ANC government appear to have hindered prosecution of known murderers in the Security Police. (See “Sunday Times” May 24 2015) Corne van Tonder vandalised the sculpture, was fined R15000 and ordered to pay R214000 for its repair.

Another image is of the statue dedicated to Nokuthula Simelane, by Rohan Janse van Vuuren, in Bethal. The statue of the missing freedom fighter was unveiled in November 2008, and celebrates the struggle heroine who initiated nationawide potato boycotts in the early 1960s in protest against the poor treatment of farm workers in the area. In 1983 she was trapped by the security police, was severely tortured, and went missing shortly after. For the past 32 years her family have tried to solve the mystery surrounding her disappearance. During the TRC hearing, a former policeman testified that she had been tortured and killed. Her remains have never been found. The statue was vandalised earlier this year. 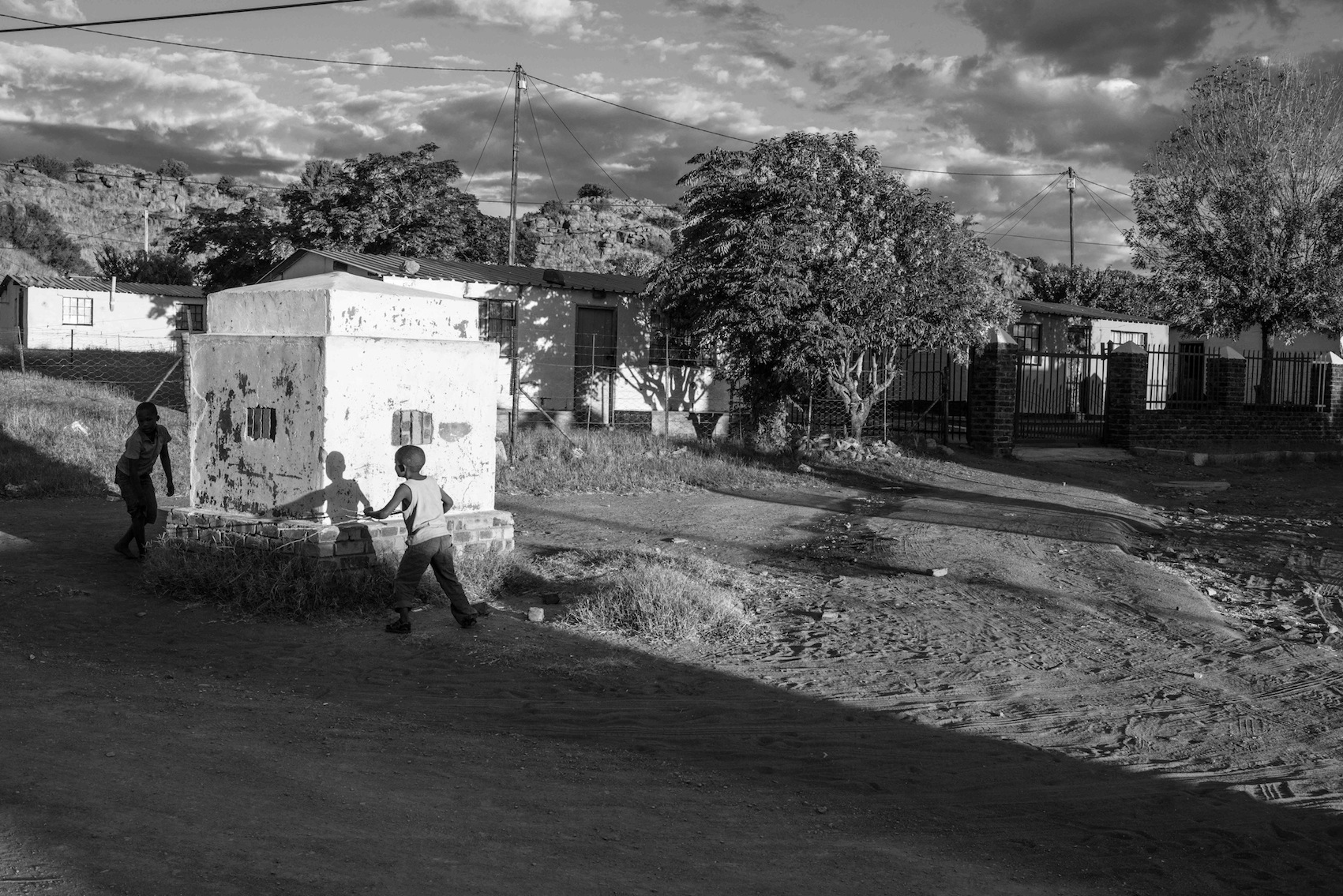 Photograph by David Goldblatt, Memorial to four members of the Colesberg Youth Organisation (CYO) killed here by the police on 3 July 1985. Kuyasa Township, Colesberg. 31 March 2014. Image courtesy of the artist and Goodman Gallery.

It was a time of great tension in South Africa. Organisations within the UDF had adopted a policy of making the country ungovernable. In Colesberg there had been clashes between the CYO and members of the army and police on 2 and 3 July 1985. After Solani Gcanga “was arrested and repeatedly assaulted and paraded around the township on top of a Casspir with a sjambok around his neck…(the) youth marched on the township house of a policeman and set fire to his car. Later that day… police in Caspirs and vans entered the township. When youths approached the houses of two police officers, police inside… (one) house (at right in this photograph) opened fire, killing four people” (See “All Roads Lead to Colesberg” Kemper Museum & Tourism Information Office.) The Colesberg Traffic Department regards the memorial as a traffic hazard and has threatened to remove it.

Based in the Vulindlela Housing Estate, Port Elizabeth, the monument was built to commemorate the four United Democratic Front (UDF) anti-apartheid activists who, while travelling from Port Elizabeth to Cradock, were abducted by the Security Police. They were assassinated and their bodies burned on 27 June 1985.

The six policemen who confessed to the murders were refused amnesty by the Truth and Reconciliation Commission (TRC) for lack of full disclosure.

The Colesburg Memorial, based in Kuyana township, pays homage to the four members of the Colesburg Youth Organisation (CYO) who were killed on 3 July 1985. At the time, there had been a clash between the CYO and members of the police. Solani Gcanga was one of the activists who was detained, tortured and repeatedly assaulted by the security police. Today, the Colesburg Traffic Department regards the memorial as a traffic hazard and has threatened to remove it.

It is through Goldblatt’s images that we remember the pain of our past and continue the debates that will shape our future.

David Goldblatt was born in 1930 in Randfontein, South Africa and since the early 1960s he has devoted all of his time to photography. In 1989 Goldblatt founded the Market Photography Workshop in Johannesburg. In 1998 he was the first South African to be given a one-person exhibition at the Museum of Modern Art (MoMA), New York. Goldblatt received an Honorary Doctorate in Fine Arts at the University of Cape Town in 2001. The same year a retrospective exhibition of his work, David Goldblatt Fifty-One Years, began a tour of galleries and museums around the world. He was one of the few South African artists to exhibit at Documenta 11 (2002) and Documenta 12 (2007) in Kassel, Germany.

Goldblatt received an Honorary Doctorate of Literature from the University of the Witwatersrand in 2008. He has held solo exhibitions at the Jewish Museum and the New Museum, both in New York and exhibited alongside photographers such as Walker Evans and Bruce Nauman in The Original Copy: Photography of Sculpture, 1839 to Today at MoMA. His work was included in the exhibition ILLUMInations at the 54th Venice Biennale in 2011, and has featured on major shows at the San Francisco Museum of Modern Art, the International Centre of Photography in New York and the Barbican Centre in London. He has published several books of his work. Goldblatt is the recipient of the 2006 Hasselblad award, the 2009 Henri Cartier-Bresson Award and is the 2010 Lucie Award Lifetime Achievement Honoree. Goldblatt received the ICP Infinity Award for Lifetime Achievement in 2013.

David Goldblatt’s exhibition, Structures of Dominion and Democracy brings to life the structures of past and present South Africa.