She wrote and illustrated her own folk takes. As one of the first black women to hold a public exhibition, she was celebrated and vilified all at once. But Gladys Mgudlandla emerged out of the turbulent 1960s when the repression of apartheid was beginning to take hold, as an uncompromising artistic force.

Gladys Mgudlandlu from Peddie in the Eastern Cape was a self-taught fine artist with a wealth of natural talent. Gregoire Boonzaaier described her as a ‘black Irma Stern’. But the accolade came at a time when white praise was the kiss of death.

In 1963 the celebrated writer Bessie Head wrote a review titled ‘Gladys Mgudlandlu: The Exuberant Innocent’. South Africa’s white arts establishment, largely ignored head who was exiled in Botswana. She criticized Mgudlandlu for being an “escapist” who fed on “white guilt”. Head argued that her art served only to entertain white audiences. She claimed that her criticism was based on the fact that Mgudlandlu’s work did not challenge the political situation, but that her art “performed a kind of service”, with her “hasty, childish scrawls” that were fitting for “the demand for escape that she is the unconscious supply”.

Almost in illustration of Head’s critique, white art historian Ezra Miles writes on the other hand:

“Mgudlandlu’s vibrant personality and pristine form of expressionism enchanted journalists, artists and art lovers. Art critics not only reviewed her exhibitions, they also bought her paintings. Paging through newspaper cuttings, it is evident that, from her debut to her last solo exhibition in 1972, she was, with the exception of 1969 and 1970, in the news every year.”

But have we matured as a nation to allow artists to explore their world on their own terms? Grappling with these issues is Nontobeko Ntombela, a curator based in Johannesburg. Her thesis titled ‘A Fragile Archive‘ examines the exhibition records of Gladys Mgudlandla in order to understand how archives contribute to the writing and memory of South African artists autobiographies.

Who had the power to ‘put together’ and later ‘access’ these archives, what was included, what was left out and how does this constructed biography shape how we understand our artists?

“It is not about finger pointing which would be futile exercise but rather how it is offers new and not alternative readings of history from an unusual place. It also begins to set up new registers of sort, about association and disassociation, assertion and reclaim of this history,” says Ntombela.

Mgudlandla and her work has been constructed through the surviving records of her exhibitions and have contributed to our current understanding of rural and township life in our recent past, especially because her art was inspired by the rituals and customs of her Xhosa heritage. A self- taught artist, her style was highly influenced by indigenous painting techniques learned from her grandmother, who was a muralist and taught Mgudlandla the visual art as a young girl. She was deeply influenced by her rural childhood and portrayed these memories with an abstract, dream-like appearance.

In her Fragile Archive thesis Ntombela says the current attention on Mgudlandla and her work redresses historic oversights but we should not suspend criticism completely:

“Mgudlandlu’s biography is on the one hand exemplary of the concerted efforts by cultural institutions in overturning the exclusionary political systems during the apartheid years by creating opportunities to exhibit and elevate public visibility and importance. On the other hand, however, this historical registering of this artist lacks criticality of her position within this space. The overt contradictions in her biography exemplify these inconsistencies. This thesis criticises how these contradictions have to this day remained unchallenged. This criticism is also about laying bare the contextual background in which this artist lived and has in turn highlighted inequalities created by historical writings. This study has, at the same time, drawn on the usefulness of having her history recorded in the first place as a means of gaining insight about it. This examination therefore presents an opportunity to remedy and reshape past oversights and create newer readings of Mgudlandlu’s position in the art world.” 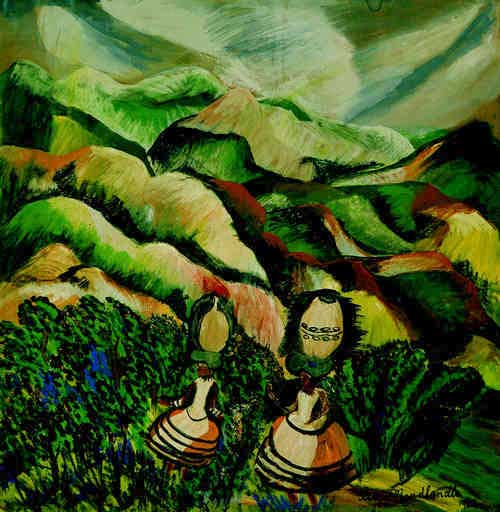 Lie of the Land

Mgudlandla’s subject matter includes indigenous birds, rural landscapes and brightly coloured scenes from African townships and villages. Much of her work was done at night, by candlelight, owing to the lack of access to electricity. This added to the abstract compositions and dreamlike quality of her work as can be seen in Lie of the Land that depicts two women in traditional Xhosa dresses, who seem to be floating through a lush green landscape with pots balancing gracefully on their heads. 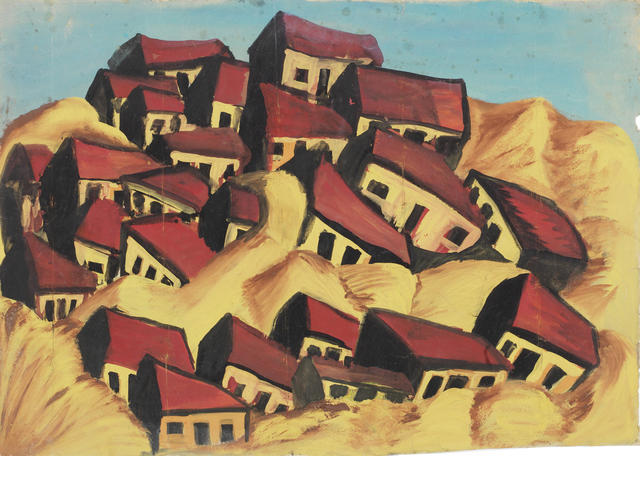 Another example is Gugulethu, painted in 1964. The broad yellow brushstrokes sweep and contort into the shape of a hill and red-roofed houses. The dark doorways and windows gape, the structures stretch awkwardly towards the blue sky, fighting for space in the sun.

Mgudlandla was born in the Eastern Cape in 1925 and attended primary school in Port Elizabeth. After qualifying as a teacher she moved to Langa, Cape Town where she taught art at the Athlone Bantu Community School for 15 years. Once the Bantu Education Act of 1953 was enforced, Mgudlandla was no longer allowed to teach at these schools that were declared ‘coloured’ under the apartheid regime. She then taught briefly at schools in Nyanga and Gugulethu before dedicating herself to her art in 1957. She was in her early thirties at the time.

Mgudlandla was one of the first African women in the country to hold a solo exhibition. During the period 1960-1971 she exhibited in cities around the country including Cape Town, Port Elizabeth, Durban and Johannesburg. She was given the Presidential Order of Ikhamanga in Silver for her pioneering contribution to visual arts in South Africa. She died in 1979.